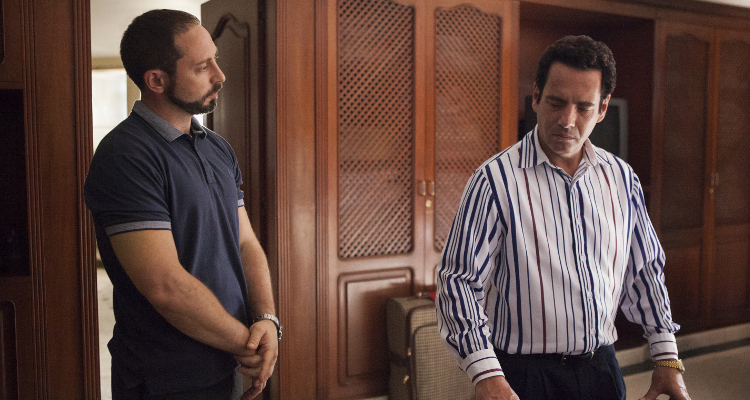 There are two absolute truths about Netflix’s crime juggernaut, Narcos. Firstly, it makes you root for the baddies and secondly, it’s based on real drug kingpins. Jorge Salcedo and the Cali Cartel are the focus of Narcos season 3, which premiered on September 1.

Narcos season 3 premiered on Netflix on September 1, much to the joy of fans. This time, it follows the richest cartel in history, the Cali Cartel, which rose to high echelons in the drug trafficking ring thanks to the vacuum left by Pablo Escobar’s death. The series shows the character, Jorge Salcedo, an insider in the cartel who helps the DEA take it down. But who is the real Jorge Salcedo? Did Narcos stay true to history? You can compare the show to the real story with our Jorge Salcedo wiki, right here.

He was the Cartel’s Head of Security

Those who have binge-watched Narcos season 3 may have noticed one character, who stood out apart from the DEA agent Javier Pena and the four drug lords of the Cali Cartel. Jorge Salcedo, Cali’s chief of security was portrayed by the Swedish actor, Matias Varela. Varela was relatively unknown in the U.S., but since his appearance in Narcos, he’s gaining mainstream attention. That prompts us to ask; who is the real Jorge Salcedo and what was his take on Narcos?

Salcedo, in reality, played an equally important role to Varela’s character in the series. As the cartel’s head of security, Salcedo ensured the safety of the families of the Orejuela brothers —two of the four Cali kings. He became extremely familiar with the functioning of their business. The Cali Cartel took advantage of the vacuum created by Escobar’s downfall to land at the top of the Colombian drug business. They operated with appalling ruthlessness and corruption to build an empire that raked in $7.0 billion a year.

Before he joined the cartel, Salcedo was the son of a retired Colombia military general. He had experience in counter-terrorism assignments and worked for oil refineries. Considering his background, he was an unlikely recruit for one of the biggest cartels in the world. Having studied mechanical engineering and industrial economics, he first designed machinery. The cartel originally wanted him to use his connections to hire mercenaries to assassinate Escobar. He oversaw the transport of 500-pound bombs from El Salvador, which were meant to be used on Escobar. But the Cali’s plans to kill the infamous outlaw all foiled.

He Turned into an Informant

While working for the cartel, Salcedo couldn’t handle the cruelty and corruption he was witnessing or was made to do. He also feared for the lives of his family. We see in Narcos that Salcedo works with Pena and the DEA to help take down the four kings of Cali. When the Cali Cartel hired him, Salcedo had been convinced he was doing his nation a great service by helping them kill Escobar.

The attempts to assassinate Escobar failed, and Salcedo was dragged too deep into the criminal world. His employers wouldn’t let him leave, and Escobar’s Medellin cartel knew he was hired to kill the kingpin. With the crackdown on the Colombian Government by the U.S., Miguel Rodriguez-Orejuela became paranoid and started killing anyone he suspected of betrayal. Salcedo had witnessed a brutal execution and was tasked with organizing the murder of the cartel’s accountant, Guillermo Pallomari, who maintained accounts of the bribes. If he didn’t, Salcedo feared he would be killed alongside his family.

To save himself and do the right thing, Salcedo retaliated. He saved Pallomari and approached the CIA to work as an informant. He turned on the very drug lords whose family he was tasked to protect. “It was very risky, but I was trapped in a nightmare, in a totally corrupt environment. I had to escape,” he spoke about the risk.

He Helped Uncover the Cartel’s Corruption

As the U.S. pressure mounted, the Colombian Government intensified the efforts to take down the drug trafficking ring. Cali Cartel feared that if the government got them first, their criminal enterprise would crumble. Attempts to strike a deal of voluntary surrender didn’t work out, and the Orejuela brothers fled from their luxurious homes in the face of a manhunt similar to what took down their rival, Escobar.

The brothers moved from one safe house to another with no way for authorities to track them. The only one who had known the whereabouts of their location was Salcedo who, unfortunately for the Orejuelas, was not on their side. Miguel called Salcedo to his safe house one day to get a report on whether Pallomari was done away with.

With Salcedo’s information, law enforcement stormed Miguel’s apartment. But with a double-agent who was in the very group that raided the safe house, Miguel was able to escape. While Miguel escaped, Salcedo was able to direct the agents to a secret vault containing evidence of how deep the Cali Cartel’s claws were in Colombian politics and law enforcement.

To deflect suspicion, Salcedo pretended to investigate who leaked Miguel’s whereabouts. It bought the DEA time to save his extended family and also raid the cartel’s warehouses. He also risked his life to protect Pallomari, who held crucial information against the cartel.

Almost a month after the first failed raid, Salcedo called his DEA contacts, and the police strike team raided another one of Miguel’s safe houses. This time, they succeeded in catching him just before he escaped into another secret vault. Miguel and his brother were extradited to the U.S. where they faced trial, while the other members were arrested.

But the threat wasn’t gone for good. Salcedo and Pallomari were crucial informants. Soon after Miguel’s arrest, the cartel betrayers and their extended families were taken into the U.S. witness protection program while Cali’s corrupt infrastructure was exposed.

Salcedo pleaded guilty to minor charges, but American agents advocated for leniency given that he did save the lives of Colombian citizens. For his service to take down Cali, Salcedo was awarded $1.7 million. But he is still marked for death.

Jorge Salcedo has now changed his name and lives in an undisclosed location with his family. He has been in witness protection for 22 years and unapproachable for interviews. Netflix was able to seek him out to consult on Narcos, though they don’t disclose any details about him. Even Matias Varela couldn’t meet Salcedo and had to resort to whatever literature on him he could find. According to Salcedo, the show has mostly stuck to the true story though a few minor details were changed to connect the plot points.

In a rare interview, Salcedo, now in his late 60s, spoke about the changes he had to make in his life since joining witness protection. He can no longer work as an engineer under his old name and his wife, a lawyer by credentials, had to learn English. But he fulfilled his dream to start his own business. The details of his business, however, are a close-guarded secret.

Salcedo isn’t afraid that Narcos would revive the attention on him, especially when he’s trying to stay hidden. But he knows that bringing down the Cali Cartel was no small feat. “I’m not proud of what I did in general,” said Salcedo. “But I’m proud of what I did in capturing Miguel and bringing down the cartel. And not just the cartel, but the entire corrupt government and the system. But that’s the thing in intelligence, sometimes when you do something good, don’t tell anybody.”