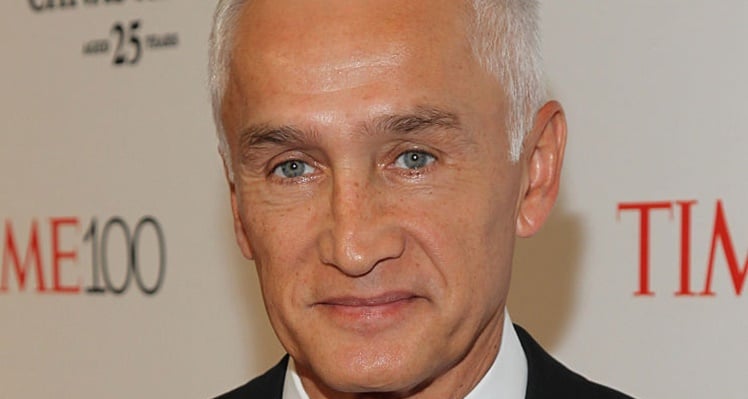 Noted Latino journalist and author, Jorge Ramos has recently made comments about immigration in the United States. Fox News host, Tucker Carlson recently interviewed Ramos regarding his comments about the States being as much “our country” as it is “theirs.” Here’s everything you need to know about Jorge Ramos.

Last year, Donald Trump told award-winning journalist, Jorge Ramos to “go back to Univision,” before having security physically remove him from the campaign event. What sparked the incident was Ramos questioning the then-GOP nominee about his plan to deport 11 million undocumented immigrants from the United States. Since this incident, Ramos spent nine months traveling across the U.S., speaking to white supremacist groups while making his new documentary Hate Rising. The documentary, directed by Catherine Tambini, speaks about how Trump has emboldened hate against immigrants.

On Wednesday (March 8), Ramos was interviewed by Fox News host, Tucker Carlson about his recent comments on immigration. Ramos feels that President Donald Trump is painting immigrants in a negative light, causing a separation between “us” (who Ramos considers to be the entire country) and “them” (predominantly caucasian people who are against multiculturalism). Carlson questioned Ramos’ statements and sparked a heated discussion about immigrants, Latin Americans, and crime rates in the United States. Here’s our Jorge Ramos wiki, including facts about his wife, daughter, and his net worth.

“This land was given to us…and we need to take it back.” Don’t miss #HateRising tonight @ 10PM on FUSION. pic.twitter.com/rOxEIv4u4G

He’s Known as “The Walter Cronkite of Latino America”

The 58-year-old journalist has a net worth estimated to be around $12.0 million, with an annual salary of $3.0 million. He currently has three anchoring jobs, most notably as the anchor of the Univision news television program, Noticiero Univision, host of the Univision Sunday-morning political news program, Al Punto and the host of the Fusion TV English-language program, America with Jorge Ramos.

Ramos has covered groundbreaking news stories of the current age, including the war in Afghanistan, the 9/11 attacks, the aftermath of Hurricane Katrina, and even the fall of the Berlin Wall. He has authored 10 books, and interviewed major political personalities like Barack Obama, Hillary Clinton, Hugo Chavez, and Fidel Castro. He has even been featured on the cover of Time magazine, where he was listed as one of “The World’s Most Influential People.”

He has won eight Emmy Awards and the Maria Moors Cabot prize for excellence in journalism. Regarded as the best Spanish-language news anchor in the U.S., he’s known as “The Walter Cronkite of Latino America.”

He is in a Relationship with a Venezuelan TV Personality

Ramos has had a very lively love life. His first wife was Gina Montaner, daughter of exiled Cuban author, Carlos Alberto Montaner. The couple have one daughter, Paola Ramos. His second wife was Lisa Bolivar with whom he has a son, Nicolas Ramos. After they divorced in 2005, he dated the Mexican actress, Ana De La Reguerra. Since 2011, he’s been a relationship with Venezuelan TV personality, Chiquinquirá Delgado.

Delgado is a TV host, model, and actress. She was one of the hosts of Mira Quien Baila on the Univision network, where she met Ramos. Delgado was the first runner-up in the 1990 Miss Venezuela pageant, and she has appeared in several soap operas. The 44-year-old has two daughters from her previous marriages to Guillermo Dávila and Daniel Sarcos.

In June 2015, Ramos disclosed that his daughter Paola was working with Hillary Clinton’s presidential campaign. He posted the statement on Fusion’s website insisting that his relation to the Clinton campaign would not affect his objectivity as a journalist. He repeated the disclosure before he moderated the 2016 Democratic debate between Hillary Clinton and Bernie Sanders, and lived up to his commitment to be diplomatic.

Paola Ramos is a part of the communications team, working as the deputy director of Hispanic media. She recently finished her Master’s degree from Harvard, after receiving her Bachelor’s from Columbia University. According to her Twitter profile, she has experience working for the White House and the office of the vice president.

Ramos Has a Long History with Trump

The exchange in Iowa on Trump’s immigration stand, which resulted in Ramos being escorted out of the conference, was not the first time the two men have had a spat.

Ramos has always been an active spokesman for both immigrants and the Latinx community. In 2012, he even criticized the backwardness of the debate commission for never selecting Latinx moderators for the U.S. presidential debates.

In 2015, when Trump became the Republican presidential nominee, Ramos pursued an interview with the candidate for months. At that time, Univision had canceled its telecast of the Miss USA pageant and severed all ties with Trump following his comments on Mexican immigrants. Trump, in turn, sued Univision for violating their contract. When Ramos had sent a handwritten letter to Trump requesting an interview, the GOP presidential hopeful posted the letter on Instagram, which clearly displayed Ramos’ phone number. Trump deleted the post shortly thereafter.

In the press conference in Iowa, Trump had allowed Ramos to return to the conference, and the two heatedly debated on the issue of immigration. When Ramos had brought up that the majority of the Latinx community don’t think he’s suitable to be president, Trump responded by bringing up the lawsuit he filed against Univision.

This incident inspired Ramos to film his documentary, Hate Rising, which showcased the acts of white supremacists across the United States. Ramos continued to speak out against Donald Trump after he won the presidency. In February, at the Harvard University’s Goldsmith Awards Ceremony, Jorge Ramos spoke about what it is like for immigrants to live in Trump’s America.