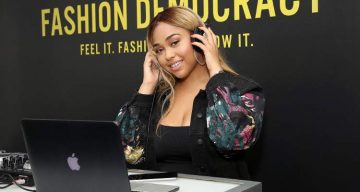 John Woods, Kylie Jenner’s BFF’s father, died two weeks after he was diagnosed with cancer in January 2017. Life for Jordyn Woods and her family hasn’t been the same since. Her mother, Elizabeth Woods (who is a management professional) has taken up the responsibility of taking care of their three children. Since her father’s untimely passing, fans often wonder about the people who raised Jordyn. Read on to know more about Jordyn Woods’ parents, right here!

Who Are Jordyn Woods’ Parents?

Last year was a terrible one for model and social media star, Jordyn Woods. It was the year when her beloved father, John Woods, passed away.

His death was super sudden and fans were devastated for her when they heard the news. Jordyn Woods’ dad passed away on January 19, 2017, two weeks after being diagnosed with cancer.

She informed everyone of the sad news via an Instagram post and wrote, “Last night heaven Got Another angel. My Daddy. Just two short weeks ago he was diagnosed with cancer and by that time it was too late. I appreciate everyone’s kind words and it means the world to me. It still doesn’t feel real. Forever and Always. [sic]”

Jordyn Woods’ mom, Elizabeth Woods, also paid tribute to her late husband by posting a black-and-white photo of him on a motorcycle.

She wrote, “Tonight my best friend of so many years rode off into the sunset on a forever long Harley ride. Thank you for being a great husband, best friend and thank you for our fabulous kids and I’m so numb that I can’t even believe this is real. RIP my angel John.”

To most people, Woods’ death came as a big surprise, as they had no idea that he was suffering from terminal cancer. Jordyn and Elizabeth Woods had not announced his diagnosis to the public and revealed the news only to other family members and loved ones.

Elizabeth Woods is a talent and brand manager at Mixed Image Media and PR executive in Los Angeles, California. She is just as crazy about indulging in makeup as Jordyn and Kylie Jenner are.

Kylie is Jordyn’s best friend, and the two of them are as close as sisters. In fact, you’ve likely seen Jordyn on Keeping Up with the Kardashians and on Kylie’s social media accounts. And like her daughter, Elizabeth Woods also turns to Kylie when she wants to confide in someone.

On Mother’s Day 2017, Woods shared a selfie on social media of herself with Jordyn and Kylie after she shared a particularly emotional moment with the cosmetics company owner.

Woods wrote on Instagram, “This is our typical. But today we laughed together, they dried my tears, and we enjoyed being alive and sharing love! Thank you, my babies!!!”

She even posted birthday wishes for Kylie on the photo-sharing app.

So much love all the time ❤️ happy birthday baby girl @kyliejenner ? love you so much ❤️❤️

She Has Two Other Children

Aside from Jordyn, Elizabeth Woods has two other children. She has a son who is an artist (professionally known as JWoodz) and another daughter named Jodie Woods.

She has her own circle of friends, which include some big names like Jaden Smith, Jeremy “Hot Mugshot Guy” Meeks, Ashley Graham, and Shaun Ross. They are often featured on Elizabeth Woods’ Instagram account.

Elizabeth Woods Is a Management Professional

Currently, Woods is the manager and owner of Mixed Image Media, a talent and brand management PR company she started in January 2013.

Woods worked at several organizations before founding Mixed Image Media. Some of her previous jobs include being the director of business development at Boujzee, Inc.; a computer consultant at Head 2 Heart; a photographer, illustrator, and layout designer for the Shades of Love book; and an estate manager at Treyball Development.

She studied at Wayne State University in Detroit, Michigan and graduated with a Bachelor’s degree in medicine. She has also been a member of the National Association of Female Executives since January 2003.

With all these qualifications and achievements, is it any wonder that Elizabeth Woods’ children, including Jordyn, turned out to be such smart and brave kids?

She Raised Money for Her Husband’s Medical Costs

After her husband’s death, Elizabeth Woods started a GoFundMe page to raise money for the medical and memorial costs that needed to be paid.

Jordyn Woods’ father has passed away, but his wife and his children think of him every day. He was there for them while he was alive, and the family has many happy memories of him, which they share even today.

Nowadays, Elizabeth Woods has the massive responsibility of managing her career and looking after her three children. With love for John Woods in her heart and soul, Jordyn Woods’ mother is all geared up for the future!

Nothing ever compares to the love you feel when you look at your family. That’s truly what love and accomplishment should feel like ❤️ #family #teamigotthis #woodsmanagementgroup #life #love#thedropla