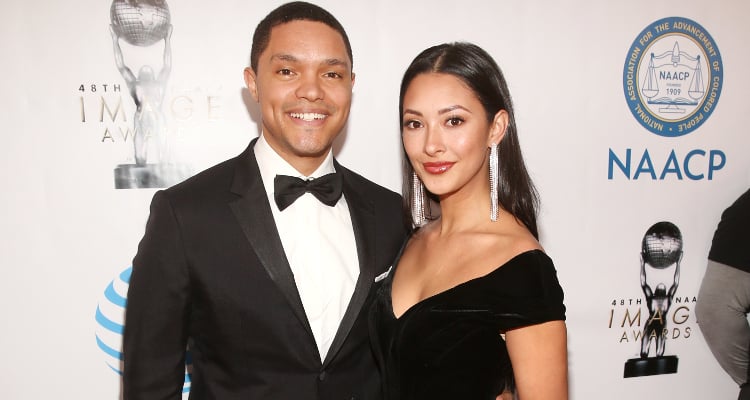 Trevor Noah recently splurged on a $9.7 million penthouse apartment in Manhattan, which was reportedly found by his girlfriend, Jordyn Taylor. Here is everything you need to know about Trevor Noah’s girlfriend.

Trevor Noah is getting serious with his girlfriend of two years. Jordyn Taylor is making her mark in the music industry and is reportedly moving in with her boyfriend into a three bedroom duplex. We have all the details on Trevor Noah’s girlfriend right here.

Jordyn Taylor Braff was born on November 14, 1990, in Riverside, California to Elayne and Jason Braff. Taylor has two bothers, an older one named Justin and a younger one named Mikey. Taylor is of mixed African-American and Albanian heritage. From a very young age, she loved music and would participate in several singing competitions throughout Southern California.

Looking at art. Wearing art. Thank you @yeezy4prez for my new favorite sneakers!!

At the age of 15, Taylor signed a contract with Manta Productions. She was working with them on her first album for a year and a half until she met Mark Jackson and Ian Scott, who showed her a new sound. At that time, Taylor’s MySpace fame was growing. After her song “Strong” was released, she became the number-one rising star and unsigned artist on MySpace, and was labelled the “Official MySpace Princess.” Jordyn Taylor had almost 52 million plays on the web site in 2013.

A few years after her first song was released, Taylor signed her first contract with Interscope records. She also interviewed several famous artists such as Carrie Underwood, LMFAO, and Ryan Tedder for a MySpace talk show.

In 2009, her song “Accessory” was in the movie, Confessions of a Shopaholic. Soon, Taylor started writing and recording songs with RedOne, Darkchild, and Fernando Garibay. However, at the start of 2010, she was released from her contract with Interscope, as her career was not taking off the way she wanted it to.

For a few months, Taylor decided to take a break from writing and recording. By fall 2010, she picked up where she left off and began recording and writing songs with Matt Wong and Jeff Victuelles. Though she planned on releasing the album independently, a Japanese label named Star Base signed Taylor. For almost two years, she wrote and recorded her self-titled album, Jordyn Taylor with the help of Wong and Victuelles.

Jordyn Taylor’s first album was released in 2012 and ranked in the top 10 on Japan’s R&B iTunes Chart. Her album was received to positive feedback with fans loving her hits “Never Again,” “Be the Same,” and “Stuck.” To further promote her album, she had multiple shows throughout Japan. Soon, her contract with Star Base ended and she signed a new contract with Space Shower Music.

Her next album, Shine, was finished in almost two months. The second album also received positive reviews and showed Taylor’s transition from R&B to pop with singles like, “Set Me Free” and “It’s Vabene,” featuring DJ Hello Kitty.

In 2014, Taylor announced that she would be taking a break from music in her blog, adding that she would share her new music when the time was right.

So, I favor dimples. || all in favor of @torikelly say hayyyy

Jordyn Taylor’s song, “Be the Same” was inspired by a former love of hers. The ballad was about her boyfriend of five years, who died in an accident in September 2011. She then began dating comedian and The Daily Show host, Trevor Noah in 2015.