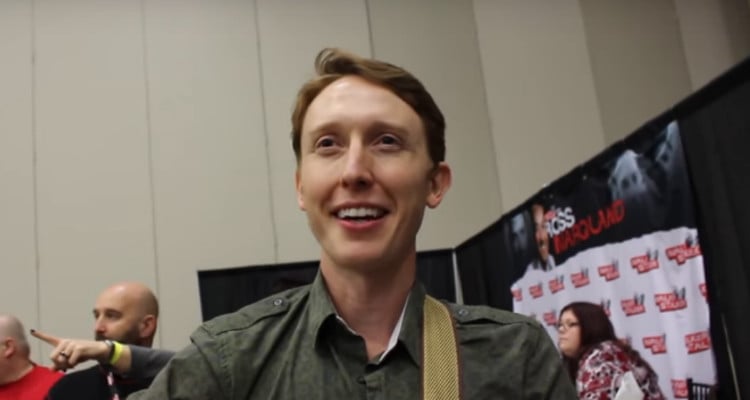 Jordan Woods-Robinson made a big impact with his role on The Walking Dead. He is also a musician who grew up on a farm in Tennessee, before making the journey to New York to become an actor. Though his role as Eric Raleigh in The Walking Dead is over, he is busy carving out a bigger career in Hollywood.

As The Walking Dead season 8 moves forward, there has already been a big casualty. Eric Raleigh (Jordan Woods-Robinson) died from a gunshot wound in the latest episode (November 5). After seeing an exit wound, watching Eric joke around with his boyfriend Aaron (Ross Marquand), and by inspiring Aaron to go back and fight, fans hoped he would recover. But when Aaron comes back, he is shocked to find Eric as a walker. People are curious to know more about the actor, so we have some details from Jordan Woods-Robinson’s wiki.

From a Small Farm to the Big City

There is no information on Jordan Woods-Robinson’s age, but he started acting young, making his television debut in the long-running soap opera, The Guiding Light. He also appeared in four episodes of Nashville. Woods-Robinson was born and raised in Bybee, Tennessee, on a 180-acre animal rescue farm, but he moved to New York to pursue his dream of acting. He graduated from New York’s Tisch School of the Arts in theater, and within a few weeks, got his first role as a member of the Blue Man Group. Woods-Robinson was lucky to travel the world as part of the show, and got a lot of exposure to the world of acting.

Also Read:  Who Is Morales on “The Walking Dead?” What Happened to Him?

He made his film debut in Scare Zone (2009), where he played a geek. He then got the opportunity to work in a slew of films, including A Little Bit of Heaven, Missionary, Invaders, and The Hunger Games: Mockingjay – Part 1. However, his breakthrough role was that of Eric Raleigh in The Walking Dead. Robinson’s character was a recruiter for Alexandria, and one half of the show’s first openly gay couple.

Woods-Robinson is much more than just an actor. He is also a musician, songwriter, and composer who juggles his talents while maintaining close contact with his fans through social media. Jordan Woods-Robinson’s Instagram account is full of pictures of the actor with stills from The Walking Dead, food, his pets, and fans.

Music was always a passion of his, as he revealed, “I grew up as a musician in East Tennessee, playing folk and country music around Pigeon Forge, which is the Las Vegas of the Smoky Mountain.” Robinson is the co-founder of SOSstudio, an online recording studio that offers services and other technical resources to artists, which he describes as “a company for emerging artists offering a full-production online recording studio, a weekly blog of DIY tips, and a business podcast for artists.” He even released his debut pop-rock EP, Crazy and Back through the site.