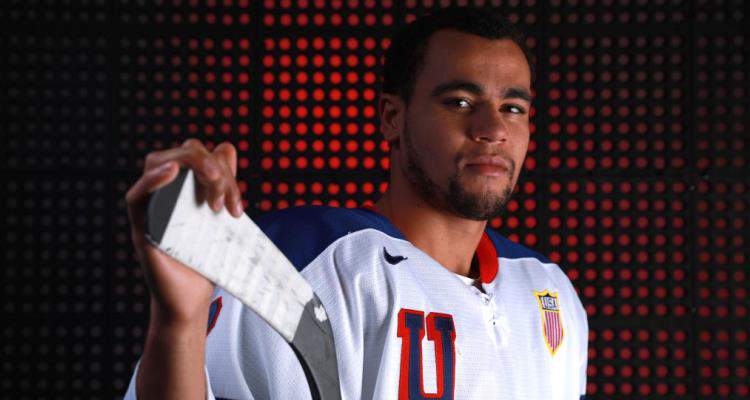 Jordan Greenway is the first ever African-American player to complete for team USA in the ice hockey event at the Olympics. The NHL disallowed its players from competing in the 2018 winter Olympics, which helped pave the way for this historic moment. Greenway will look to help team USA return back to the podium, after the disappointment of finishing fourth in the 2014 Sochi Olympics. If you want to know more about the man everyone’s interested in, we’ve got details on Jordan Greenway’s hockey background, his accomplishments, and more. Our Jordan Greenway wiki has got it all!

Jordan Greenway’s age is 20, and was born on February 16, 1997. Since Greenway’s birthday is in the middle of the 2018 Winter Olympics, he will be spending his 21st birthday in South Korea! His place of birth was Canton, New York.

Greenway started to play organized hockey when he entered the Canton minor hockey association. Greenway went on to play for Shattuck-St. Mary’s High School, the same school that Sidney Crosby attended to propel his hockey career.

This then lead the path for Greenway joining the USA Hockey National Team Development Program (U.S. NTDP). He played two seasons in the United States Hockey League (U.S.H.L) as a member of the U.S. NTDP, from 2013 to 2015. Greenway’s amazing performance earned him a spot in the 2014 CCM/USA Hockey All-American Prospect game.

The All-American Prospects game is to showcase the skill sets of the top 40 American born hockey players that would be eligible for the NHL entry draft. In 2015, Greenway received a call that he was drafted by the Minnesota Wild as the 50th overall pick (picked in the second round as the 20th pick).

Even though he has been drafted by the Minnesota Wild, Greenway has never played a game in the NHL. After being drafted he played two seasons for Boston University.

The 2018 Pyeongchang winter Olympics will not be the first time that Greenway will be cheered on by Americans for an international tournament. In 2014, Greenway helped team USA win the gold medal at the 2014 World Under-17 Hockey Challenge.

Greenway was a contributor to the team’s victory with three goals and two assists.  The following year he played for team USA winning the gold medal at the 2015 IIHF World Under-18 Championships.

Most recently, Greenway was part of the gold medal victory in the 2017 World Junior Ice Hockey tournament (also known as IIHF World Under-20 Championship).

For Jordan Greenway, the Winter Olympics 2018 is a dream that is fast coming true!

Decades in the Making

The first Winter Olympics occurred in 1924 in France, with only 16 countries participating in the games. Almost a century later, the Olympics have 92 countries being represented and are being held in Pyeongchang. This growth in the Winter Olympic games has also resulted in Jordan Greenway breaking the barrier of being the first African American to play on team USA.

Jordan Greenway will make his Olympic debut on February 14, 2018, when the United States takes on Slovenia in its first Preliminary game. Team USA is part of group B of the preliminary round robin, which also includes Slovakia, Slovenia, and neutral country (technically Russia).

If team USA gets past the first round, the elimination games will begin on February 20, 2018 with the gold medal match set for February 25, 2018!

Could Jordan Greenway and Team USA Win the Gold?

The favourites to win the 2018 ice hockey Olympic gold medal are the athletes playing under the neutral flag (these are the players that were supposed to represent Russia).

The odds for this team are 1-1, which simply means that for every tournament they enter they should come out victorious.

The defending gold medallist, Canada, have the odds of 9-2, in their favour. The United States’ current odds are 10-1, meaning for every 10 tournaments played there will be one championship won. The worst odds go to South Korea and Slovenia, which are 400-1.

Even though some countries have more favourable odds compared to others, nothing is guaranteed until the games are played on the ice and the final whistle is blown!

Team USA may not have the best odds, but they are still good enough to be considered to win the gold medal. And if there’s anything we know for sure about Americans, it’s that they are sure to cheer for team USA due to their underdog status!