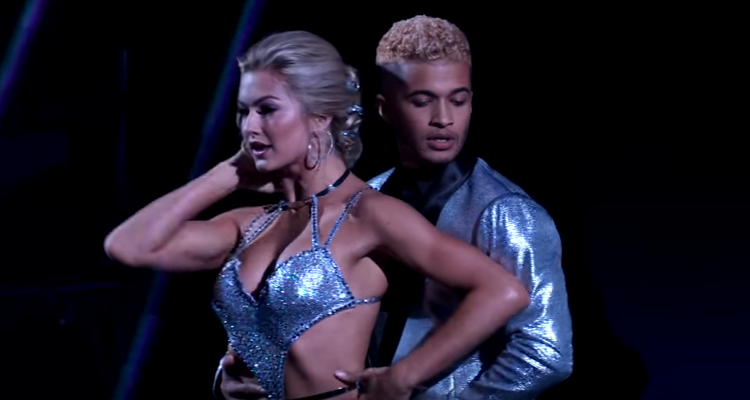 If you’re kicking yourself for missing Jordan Fisher and Lindsay Arnold on Dancing with the Stars last week, then you should know you missed one heck of a performance! But worry not, as tonight we will get to see these two back on our screens. We’ve got all the info you need, including the judges’ reactions to their tango and more. We’ll also get to see another Jordan Fisher and Lindsay Arnold performance, if all goes well tonight!

We’re only one episode into season 25 of Dancing with the Stars…but if Jordan Fisher and Lindsay Arnold’s performance last week is any indication, these two are in it to win it! Their lighthearted and technically skillful tango proved that Fisher has no problem in the groove department and Arnold has her eyes set on that Mirrorball trophy. Jordan Fisher led Lindsay Arnold on Dancing with the Stars for the first time last Monday night, and really blew the judges away. Don’t worry if you missed the season premiere of Dancing with the Stars last week, because we’ve got you covered. Keep reading to find out how these two did!

Jordan Fisher and Lindsay Arnold on Dancing with the Stars

Last Monday night marked the beginning of season 25 of Dancing with the Stars and it’s already shaping up to be one of the most exciting seasons yet! Season 25 started off with a bang as viewers got to witness veteran performer of DWTS, Lindsay Arnold—who’s come dangerously close to earning herself a Mirrorball trophy in the past 3 seasons—get acquainted with her new partner, Jordan Fisher. From the moment the pairing was revealed, it was obviously a match made in heaven! The initial clips show both of them bursting with energy and oozing charisma as they slowly transition from excitement and elation to practicing hard for their big debut as dance partners. And it really was a jaw-dropping performance as fans of the show got to see Jordan Fisher and Lindsay Arnold showcase their tremendous talent and chemistry for the first time together as part of the Dancing with the Stars cast. And judging by Carrie Ann Inaba’s reaction and resulting score following their electric dance number, Jordan Fisher’s Dancing with the Stars debut had everyone notice him as a real contender. This guy has got the moves and swagger to steal all the votes!

The pair prepared a dynamic and extremely upbeat tango routine to Shawn Mendes’ There’s Nothin’ Holding Me Back. Everything about this routine, from the song right down to the shimmering silver matching outfits, was absolutely perfect. And clearly, the judges agreed because this piece earned the dancing duo one of the top scores of the evening! Their score of 22/30 had them at a tie with their competitors, Mark Ballas and Lindsey Stirling.

A Stunning Performance from Start to Finish

Anyone who watches Dancing with the Stars religiously knows that Carrie Ann Inaba isn’t one to mince words, and she definitely doesn’t hold back with her criticism of dancing skills. That said, her response to this particular dance number was definitely among the most entertaining moments on the show. She began her appraisal by making a weird squealing sound that’s sure to make your dog go crazy, right before shouting, “That was so good! That was like WOWZA!” It was obvious that she had a hard time physically containing her excitement as she momentarily leaped up out of her seat. Even the show’s host, Tom Bergeron, remarked, “Confidence and charisma have entered the building!” as he led the pair over to the judges’ table for their review.

Inaba ended her review by stating that Fisher and Arnold are “a partnership to watch,” emphasis on ‘to watch!’ And she awarded them one of the highest scores she’s ever given to any couple on the show, 8 out of 10. The other judges, Bruno Tonioli and Len Goodman, both gave the couple 7 out of 10, which is an excellent starting point considering this was Jordan Fisher’s first DWTS appearance. We can’t wait to see how far they go in the competition; we could have another Mirrorball winner on our hands here!

Catch Dancing with the Stars Monday nights at 8:00 p.m. EST on ABC.