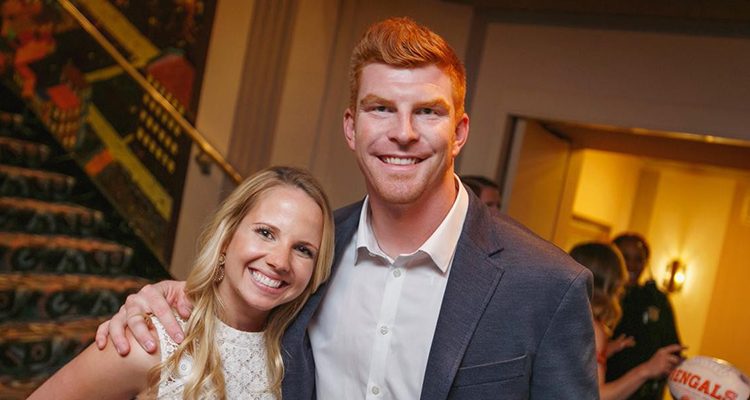 Jordan Dalton and her husband, NFL player Andy Dalton, are busy getting ready for the arrival of their third child and first daughter in January 2019, when Jordan is expected to give birth. They both run a foundation that helps sick and physically challenged children and their parents to live a better and happier life. Jordan is the strong force behind Andy, and takes care of their sons Noah and Nash Dalton when hubby Andy is busy playing football for his team, the Cincinnati Bengals.

Jordan Dalton is one happy woman these days. She and her husband, Andy Dalton, are expecting their third child, their first girl, in January 2019. They announced this terrific news on Twitter and Instagram in August 2018, and shared their joy with family, friends, fans, and well-wishers. They are already parents to two very adorable boys named Noah and Nash Dalton.

Andy Dalton is an American football quarterback for the Cincinnati Bengals of the National Football League. Before getting drafted into the NFL, Dalton played college football at Texas Christian University and was central in many of their victories.

People are very curious to know more about Dalton’s personal life, especially his wife, Jordan Dalton. We bring you some facts from Jordan Dalton’s bio.

She Was Born into a Religious Family

Jordan Dalton was born in Richardson, Texas, to her parents Jeanie Barnhill Jones and Charles Douglas Jones. She has a younger brother named Doug Jones. Jordan’s parents were religious, and both she and Doug grew up under a stern Christian faith that they still adhere to.

Dalton enrolled at Texas Christian University to study marketing in 2006, and it’s where she met her future husband, Andy Dalton. They came to know each other in their senior year and were soon attracted to each other. Jordan got engaged to Andy on October 7, 2010, around the same time that Andy’s football career took off.

She Is the Mother of Two Boys

Date night with the hubs and little baby girl??

Dalton and Andy got married on July 9, 2011, and settled down in happy matrimony. Both wanted children, and on July 1, 2014, they welcomed their first child, a baby boy they named Noah Dalton, into their family. Their second child, another baby boy they named Nash Dalton, was born on March 16, 2017, bringing much joy to the Dalton household.

Jordan isn’t just a loving wife and a mother, but she also cares deeply about children who do not have a stable home and environment to live in. She wanted to help unfortunate children, so to that end, she and Andy established their own charitable organization called the Andy & Jordan Dalton Foundation in 2011.

The Foundation helps ill and special needs children and their families enjoy a healthier and better-rounded life. It also hosts a date night where the parents of these children get to go on dates while the foundation looks after their children.

Jordan Dalton is the vice president of this foundation, which has so far given out over $500,000 in grant money to needy children and their parents. The foundation also sponsors parents to Kings Island, and makes Christmas special for those who cannot afford to celebrate it.

The Andy & Jordan Dalton Foundation hit the headlines in 2017, when Andy threw a 49-yard touchdown pass to his wide receiver thanks to which his team the Cincinnati Bengals beat the Baltimore Ravens. This enabled the Buffalo Bills to make it to the playoffs after 17 seasons.

Jordan was watching this particular game with some other Bengals wives and still remembers the celebration it caused in the house that night. Jordan remembered, “It was silent, and then he makes the throw, and everyone goes crazy. Kids are crying, babies are screaming. It was just chaos.”

Buffalo Bill fans were so happy and grateful that they donated over $450,000 to Dalton’s foundation. Almost 17,000 donors made this sizeable contribution, and since then, the foundation has never looked back.

Jordan Is a Warm & Social Person

The struggle with the snuggle #coneofshame

Jordan loves to spend time with her kids and her friends and keeps her fans updated about the events in her life. Jordan Dalton’s Instagram account is full of pictures of her with friends, with other Bengals wives, with her husband Andy, with her kids, and solo pics of her two sons.

Things Will Only Get Better!

GREAT weekend in Austin catching up with old friends and celebrating new ones!!! Congratulations Taylor and Josh… last night was so beautiful!!!

Jordan is practically counting down the days to January 2019, when her third child and first daughter will be born. Both Jordan and Andy are working hard to create the ideal home for their children. While Andy keeps the fans happy with his skills on the football field, Jordan Dalton has built a warm and cozy home for him and their two sons. Come January 2019, things are only going to get better!