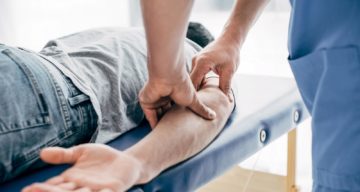 Rachel Rollar recently returned to anchoring Wake Up America on Newsmax after maternity leave. She is stepping back from the job now, however, to focus on her family. Regular viewers are sad to see her go but wish her and her family well. The news of her leaving Newsmax has brought attention to Rachel Rollar’s husband, Dr. Jonathan Stevens. While she is private about her personal life, a glance at Dr. Stevens’ social media gives us insight into their relationship and growing family. We reveal more about his background here in this Jonathan Stevens wiki.

Jonathan Stevens, and his brother, Jeremiah Stevens, were born on April 10, 1985. Jonathan’s twin brother Jeremiah is younger than him by a minute.

Jonathan and Jeremiah, with their parents Pam Murphy Stevens and David Stevens, are based in North Carolina. However, the family also has connections to South Carolina.

While Jonathan is currently based in California, Jeremiah is in Winston-Salem, North Carolina. Jeremiah works in insurance sales at DePuy Synthes.

Jonathan and Jeremiah attended Wingate University from 2003. While his brother studied business management, Jonathan earned a BS in biology in 2007. He attended Life University soon after, and became a chiropractic doctor in 2011.

Dr. Jonathan Stevens has been a licensed chiropractor since 2011. In 2014, he founded the HealthMax Center and in 2016, TrimMax.

He operated both practices in Charlotte, North Carolina, until 2019. He has been based in Los Angeles at least since 2019 and is currently the PTL One ambassador.

Rachel Rollar and Jonathan Stevens have been together at least since 2016. They had a brief interaction on Bumble, and their coworker had also made a failed attempt to set them up together.

But they ended up meeting at a Carolina Panthers game watch party where they hit it off.

The couple married on December 2, 2018, in Miami, Florida. Rollar had been an anchor on WCNC Charlotte from 2015 to 2019. Together they moved to California, and Rollar joined the Newsmax team in early 2021.

Rollar and Stevens welcomed their first child together, a daughter named Summer Rae Stevens, on June 21, 2021. Rollar had been on maternity leave then, and returned to Newsmax in September. However, she’s decided to leave the job altogether to focus on their daughter.