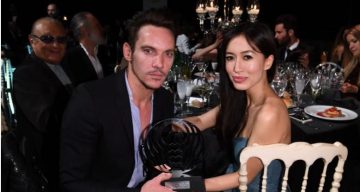 Jonathan Rhys Meyers’ wife, Mara Lane was spotted on the red carpet with their baby boy, Wolf. The appearance came a few months after Lane suffered a heartbreaking miscarriage while pregnant with their second child. Take a look at Mara Lane’s wiki to know more about her.

Mara Lane is an actress and producer, who is making headlines once again. She looked gorgeous in red as she walked the red carpet for the premiere of 12th Man, alongside her son and husband. The couple recently went through a difficult time, but looked amazing at the event. To learn more about the actress, including if Mara Lane is Asian, keep reading!

Mara Lane is known for appearing in movies and TV shows like Venice Underground (2005), Chuck, and In a World… (2013). Though we have not seen her on screen since 2013, she is happy to take a break and raise a family. The big sharer that she is, her Instagram account is full of her candid moments with them!

#2. When Did Lane and Meyers Start Dating?

Mara Lane got engaged to The Tudors star in 2014. He popped the question after dating the producer for just seven months, and she said yes! Lane even showed off her sparkler at a Christmas party, and it looked like the couple were truly in love.

They tied the knot in 2016, and she was already pregnant before the wedding.

Framily time! I have so many more to share of the filming and friends we met along the way as well but will share them closer to Memorial Day when it airs and/or give them to A&E folks to share as do not want to blow up your feeds. ?✌?️

That about sums up Mara Lane’s background. Jonathan Rhys Meyers, on the other hand, is from Ireland, and Mara Lane is American by nationality.

The best part about their son Wolf having a mixed heritage is that he will get the best of both worlds!

Lane loves children, and even taught Sunday school. So, when the couple announced that they were welcoming their second baby, everyone was very excited. But in September 2017, Meyers announced that Lane suffered a tragic miscarriage and that they lost their child.

The couple are said to have spent six weeks apart, with Lane sharing a photo of their reunion on Instagram. It was reported that Meyers relapsed after learning the miscarriage, and is now speculated that their time apart was to help him recover.

Reunited today after 6 weeks too long. #TBT this photo is after another reunion and makes me happy so hopefully will make you smile and have nice feels too. *Us on a boat in a canal in Venice during the filming of #AspernPapers. ❤️?? **We will be in Boston this weekend for the @bostonfilmfestival #BostonFilmFest17 to view #DamascusCover so if in area please come by and say hello and support our film. Before is the documentary #Heal which I am going to try to see as well. ?

There are plenty of interesting Mara Lane pics to check out on her Instagram! She is blessed to have such an amazing family and supportive friends who have not only helped her through tough times, but gave her a positive outlook. Here are some of here heartwarming pics:

Thank you Paul & Steph for a delicious dinner. ???

? Ready for you 2015! Thank you ahead of time for already happened goodness and all future awesomeness. ??? may we continue to be transmitters of love, have great new adventures and experiences and have productive yet peace filled days. #Zipline #HawaiiLove

My official pregnancy dress. I have worn this 1-2x a week every week for past 5 months. It was 3 euros in a charity shop in Ireland ?? I love #recycled clothes. #Recycledclothes #antislavery #recycledclothing over fast fashion any day for me ? T on the other hand … #megaprincess owns collars and leashes more than I am embarrassed to say ?#fathersdogter ? #TTime❤️

J is thee best Father btw. Ridiculously loving, super protective, patient and attentive. Wolf is basically snuggled, kissed, adored, sang to and entertained any free minute he has by his Papa. #LuckyMom #BlessedWife ?