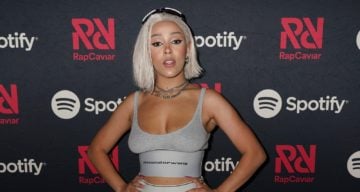 Doja Cat has had highs and lows in her short career in the social media game, but at least her romantic life has been going strong. Now that she’s dropped her second album, Hot Pink, let’s turn the focus on her boyfriend. Love-pop’s newest torchbearer, Johnny Utah, sings “Honeypie” and probably calls Doja that, too. As cute as they are smitten with each other, the two weren’t exactly well-received at first. Outside of their relationship, Johnny Utah is the musician you need to keep an eye on.

Johnny Utah Was a Nursing Student

Born Jacob Sullenger in 1996, this 23-year-old adopted the moniker Johnny Utah from the 1991 cult hit Point Break. Sullenger got into the movie through a friend and took the name of Keanu Reeves’ character as his stage name.

But before he was the indie-funk producer he is now, he was a regular kid contemplating his career choices. Sullenger considered clown, WWE wrestler, and guidance counselor as possible job options. You know, like we all did…

He somehow ended up enrolling in college to study nursing. That, however, wasn’t for him and he dropped out.

He briefly worked as a manager at a pizzeria in New Jersey before moving to Philadelphia, where he’d find his calling in music.


Utah Is a Producer Based in Philadelphia

With a fierce falsetto, funky guitar riffs, homemade lo-fi beats, and catchy hooks, Utah established himself in the indie scene with his own brand of bedroom pop. From the comfort of his apartment studio with his own equipment, the singer-songwriter has produced songs like “Honeypie” and “PATTY.”

At the same time, he tweeted hilarious stuff that made him reach viral-meme levels before his music hit. His fame boosted his debut self-titled album in 2018 and also landed him a spot on the soundtrack of HBO’s High Maintenance.

Since her Twitter controversy in 2018 and becoming the victim of cancel culture, Doja Cat has been making a steady comeback. She’s toning down the crazy Internet viral personality and putting more emphasis on her music.

On the romantic front, she went public with her relationship with Johnny Utah in September 2019. They look absolutely in love and make quite the cute couple.

However, there were some on Twitter who weren’t here for the biracial rapper’s interracial relationship with a white indie artist. Once again, a section of Twitterverse called for Cat to be “canceled.”

She’s weathered the cancel culture once before. But fortunately for her, this time, it didn’t pick up momentum.