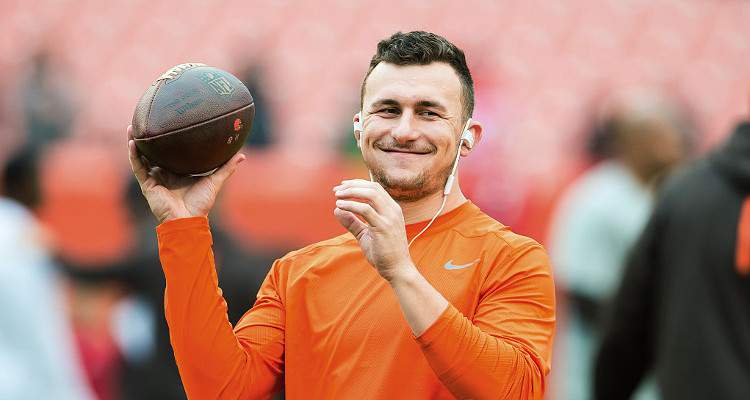 Johnny Manziel’s rise and fall in the NFL is a sort of morality tale for those who dream of playing football. The former Cleveland Browns star player succumbed to the excesses of a party-hard lifestyle. But now, Manziel says he’s cleaned up his act and is working on making a comeback in the NFL.

A lot of people want fallen football star, Johnny Manziel to come back to the NFL and get back to his winning ways. But nobody wants this more than Manziel himself, who spoke about how he turned his life around as he reflected on what he calls his “huge downfall.”

He admitted, “For a while I got so ingrained, caring only about what Johnny wanted, only caring what mattered to me, what made me happy. When I look back at it now, even when I thought I was doing what I wanted, I was miserable. I saw the trickle-down effects of what I was doing in my life; they were meaningless and pointless and selfish.”

Even as Manziel works on his dream of getting back to the NFL, people are curious about his financial situation. According to sources, Johnny Manziel’s net worth is estimated at $6.0 million, largely earned due to his time in the NFL (before he was dropped by the Cleveland Browns).

Johnny Manziel’s Net Worth Compared to Other Football Players

– Before this, he signed a four-year contract with the Cleveland Browns in 2014. Johnny Manziel’s contract was worth $8.25 million, which included a $4.3 million signing bonus and $6.7 million guaranteed.

– At that time, he was signed on to endorse several famous brands, but lost every deal after he was dropped by the Cleveland Browns in 2016.

– Some people say that Manziel threw away his career and his money because he already came from a wealthy family. His grandfather, Bobby Joe Manziel, made a huge fortune after finding oil in Texas back in the 1930s.

– His parents also did very well in their respective businesses. His mother, Michelle Manziel, was successful in her real estate business while his father, Paul Manziel, made a killing by building homes and selling cars.

– Michelle and Paul’s combined net worth is believed to be around $50.0 million, which makes for a very comfortable life.

– After Manziel was sacked by the Cleveland Browns, he put several of his properties for sale including his home in Avon, Ohio, which he bought the year before.

House on the Market

– Manziel bought the house for $489,900 in 2015, but put it on the market for a reduced price tag of $438,400. The three bedroom, four bathroom home was often described as his “sanctuary from his partying lifestyle” after his treatment for alcohol addiction.

– In 2016, he filmed his first car commercial for a Nissan dealership

Dreaming of a Comeback

In the latest news, Manziel revealed yesterday that he was diagnosed with bipolar disorder last year. He has since given up alcohol and admitted he would turn to it to self-medicate. He is also trying hard to get back in shape so that he can make a comeback to the NFL. “I am coming back from a huge downfall. I don’t know what kind of comeback it will be, but I know I want to get back on a football field, to what brought me so much joy in my life,” he explained.