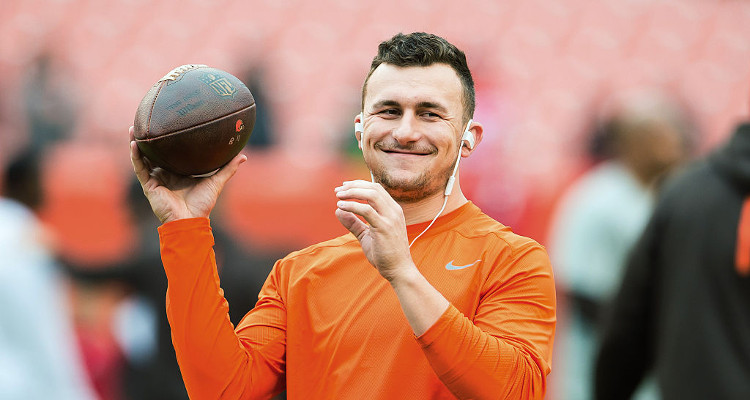 NFL quarterback, Johnny Manziel is back in the news today, but unlike the last time (when he proposed to his wife in Paris), it’s not for good reason. Yesterday, he revealed to the public that he had been diagnosed with bipolar disorder last year, and has since quit drinking. He admitted to dealing with depression and self-medicating with alcohol in the past. But then, his beautiful girlfriend waltzed into his life and literally saved him from self-destruction. He proposed to her in Paris in March 2017. Who is Jonny Manziel’s fiancee? Keep reading our Bre Tiesi wiki to learn all about her!

Johnny Manziel’s fiancée is a stunning model who was born on May 4, 1991. She started dating the football player last year. Rumors of the hot couple being an item became public when the paparazzi caught them heading into a Los Angeles club.

Not much is known about Bre Tiesi’s early life except that she is a California girl who was a cheerleader and dancer in high school. She started her modeling career quite early in life and soon became successful in the industry.

Tiesi’s remarkable resemblance with actress Megan Fox added to her popularity. Owing to that similarity, the model has been featured in several publications. Thanks to her looks and figure, she landed photoshoots for Loaded, Playboy, and Maxim. She has also appeared on MTV in the hit reality series, Nick Cannon Presents: Wild ‘n Out.

Bre Tiesi is currently engaged to NFL player, Johnny Manziel, whom she started dating in 2016. In an interview with TMZ, Manziel revealed, “When you find a girl as amazing as I did that saved me from where I was in my life, you absolutely put a ring on it.” The 24-year-old football free agent popped the question with flowers and a massive ring while the two were in Paris last March. After he proposed to her, Tiesi said, “I’m in shock…I couldn’t imagine a day without [Johnny]. I’m so glad I never have to.”

The couple is inseparable and it is evident they are deeply in love. Speaking of his past issues with depression, Manziel actually credits his recovery from destructive dependencies to Bre Tiesi. There was a time when the NFL player’s personal life and career had spun out of control due to his partying lifestyle. But, after Tiesi walked into his life, he was changed for the better.

Manziel is now admitting publicly that he was dealing with much more than excessive drinking. He was released from the Browns in 2016, with his former coach crediting his drinking, partying, and undisciplined ways to why he was let go.

But really, he was turning to booze to numb his pain.

“That’s what I thought would make me happy and get out of that depression,” Manziel explained. “When I would wake up the next day after a night like that, going on a trip like that, and you wake up the next day and that is all gone, that liquid courage, or that liquid … sense of euphoria that is over you, is all gone.” He admitted Monday that he realized his issue was self-medicating with booze.

But when Tiesi and Manziel began dating in 2016, all that changed. And now that he is engaged to this beauty, he seems to be maturing and realizing the things he needs to fix.

It’s been about a year since the proposal, and though it doesn’t look like they’ve tied the knot just yet, the two couldn’t look happier together! (Seriously, how cute are they!?)

When your man is your best friend ? @jmanziel2

It should come as no shock this girl gets paid for her beauty! She started her modeling career quite early in life. As a child, Bre Tiesi participated in and won the Little Miss Hawaiian Tropic contest. From there, she took part in more contests before deciding to take a break from modeling at the age of 12.

After high school, an 18-year-old Bre Tiesi joined the modeling industry again. She was a Corona girl and has been included in Maxim‘s Hot 100 list —now that’s some recognition!

She is an actress as well and has appeared in movies like 8th Annual Babes in Toyland: Live from Avalon Hollywood (2015), Knight of Cups (2015), and the TV show Lie to Me.

Bre Teisi became an Instagram star and has over 298k followers on the social media platform. And if you’re wondering why, you clearly haven’t checked out Bre Tiesi’s Instagram account; it is seriously scorching. And her pictures really just get hotter as you scroll, with a Manziel making an appearance in a few! Here are some of Bre Tiesi’s hot pics straight from her Instagram account, that prove she is a bombshell in every sense of the word!

Your mind will always believe everything you tell it. Feed it faith. Feed it with love. #birthdaygirl #taurus #mexico

Loving this ? piece from @rebecca_stella use my code and get 20% off your first look!!! 'Bre20' #rebeccastella

#4. Slaying in a casual workout wear.