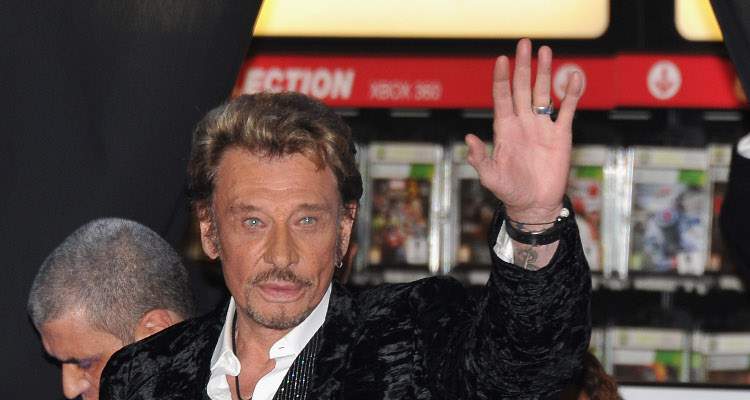 Once young Johnny Hallyday heard 1950s rock ‘n’ roll, there was never any doubt in his mind that he would become a rock singer. He did and became France’s most popular and most loved rock star for over five decades. He became a national icon in France, and his music became a part of everybody’s life. Hallyday died on December 6, 2017, and left his net worth of $275.0 million to his wife and children. Learn about his life and career in Johnny Hallyday’s wiki right here.

France’s biggest rock star, Johnny Hallyday, also known as the “French Elvis” is no more. Hallyday, who sold more than 110 million albums in his over 50-year career died in Marnes-la-Coquette, France, on Wednesday, December 6, 2017, leaving behind a mourning family, country, and millions of fans.

Johnny Hallyday’s cause of death is complications due to lung cancer, which he had been battling for a while now.

Johnny Hallyday’s wife, Laeticia Hallyday, said on Wednesday, “Johnny Hallyday has left us. I write these words without believing them. But yet, it’s true. My man is no longer with us. He left us tonight as he lived his whole life, with courage and dignity.”

Hallyday was not well-known outside of France, but now there is a tremendous interest in him. Keep reading for more details about the rock ‘n’ roll legend.

Born on June 15, 1943, in Paris, France, to his parents Huguette Clerc and Léon Smet, Johnny Hallyday’s age was 74 at the time of his death.

Hallyday developed an interest in music from a young age and was deeply inspired and influenced by Elvis Presley and the 1950’s rock ‘n’ roll revolution. He started singing rock n’ roll music in France and became famous in the 1960s.

Hello Johnny was Hallyday’s first album, which was released in 1960. His cover of the song “Let’s Twist Again” topped the European charts and sold over a million copies.

From then on, Hallyday released a string of albums and singles throughout his career. His last album was De L’Amour released in 2015.

Hallyday performed in America on The Ed Sullivan Show, and he also worked with several American artists like Jimi Hendrix, Bobby Graham, Jimmy Page, Peter Frampton, Small Faces, and Humble Pie. His live concerts were a rage and drew huge audiences in both France and abroad. Unfortunately, he was not very well known outside France and earned the nickname “the biggest rock star you’ve never heard of” in English-speaking countries.

The singer also had a passion for acting and worked in many films over the years. Not surprisingly, Johnny Hallyday’s net worth was a massive $275.0 million at the time of his death.

While Hallyday’s career was fantastic and never flagged, his personal life was often chaotic. He married five times in all, including marrying a woman twice.

Hallyday was married to Bulgarian-French singer Sylvie Vartan from April 12, 1965, until their divorce in 1980. He had a son named David from his first marriage.

The singer’s second marriage to Babeth Etienne lasted barely two months and two days, ending in February 1982. He was married to his third wife Adeline Blondieau for two years before the couple split in 1992.

At the time of his death, Johnny Hallyday’s wife was Laeticia Boudou, whom he married on March 25, 1996. The couple adopted two girls from Vietnam named Jade Odette Desiree and Joy in the 2000s.

Loss of a Soul Mate

Hallyday’s music was eclectic, and he covered a variety of genres like French ballads, blues, country, western, and progressive rock.

His friend Carlos once said, “Johnny is the Victor Hugo of tunes; if he dies, France stops.”

Minutes after the confirmation of Hallyday’s death, the French presidency issued a statement saying, “There is something of Johnny in all of us.”

Despite his huge success, Hallyday remained a humble man until the end.

When Hallyday was once asked to name the best compliment that could be given to him, Hallyday replied, “The show was good tonight.”

With Hallyday’s death, France has lost a legend. And those who loved his rebellious rock are deeply mourning his loss.

Rest in peace, Johnny Hallyday. Thank you for making us forever young!