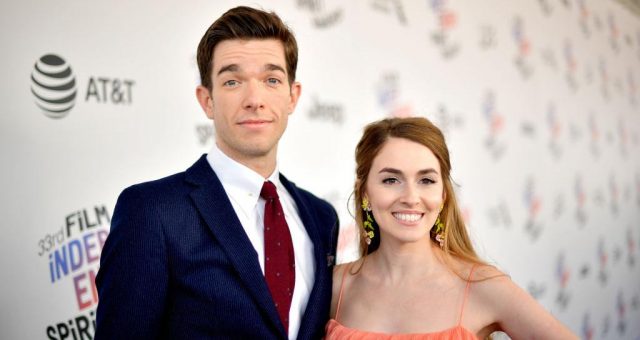 John Mulaney’s wife, Annamarie Tendler, has been a makeup artist for a while now. But today, she makes Victorian lampshades and lets her creative side shine!

Best known for her work on The CollegeHumor Show and CollegeHumor Originals, Annamarie Tendler has a great way of bringing the best out of people and things through her styling. She is a very creative woman herself and indulges in everything artistic.

Learn more about this innovative lady with details from Annamarie Tendler’s wiki.

Annamarie Tendler married comedian John Mulaney on July 5, 2014. The couple has been happily living in New York and Los Angeles ever since.

Tendler and Mulaney have both worked with some big names in the industry. Even though she isn’t in the makeup department that much these days, she’s still popular for her creative lamps.

Annamarie Tendler hails from Bethel, Connecticut, and was pretty free-spirited as a child. But she got more serious as she grew into her teens.

“I would inspire myself to not be so serious. I really had the weight of the world on my shoulders during that time because I thought everything that was happening was so important,” Tendler said about the time she was between the ages of 15 and 20.

Her favorite person is her grandmother, who also lived in New York. She was a secretary to a rabbi with a proficiency in stenography.

Tendler went to Vidal Sassoon and the Make-up Designory after she graduated from high school. She also attended Parsons School of Design to study photography for a year.

By her mid-20s, she was working as a hairstylist and makeup artist. But she had the urge to go back to school.

She then attended The New School for basic writing and psychology, and graduated with a Bachelor’s degree. She plans to study at NYU Steinhardt this fall to attain a Master of Arts in Costume Studies.

In 2007, Tendler started “The Daily Face” on Tumblr, which has now become a brand synonymous with her name and makeup expertise.

She has worked with HelloGiggles, Glamour Magazine, MTV Style, and more, while also doing makeup and hair for TV.

Annamarie Tendler and John Mulaney met years ago through mutual friends on a getaway in Massachusetts. They tied the knot on July 5, 2014, in the picturesque Catskill mountains.

The couple decided on a 1920s themed wedding, which included ornate invitations (complete with a 1920s mermaid show ticket-styled invite) and vintage decorations. The theme even complimented the bride’s crystal-beaded Jenny Packham dress!

Rewind to last night with my handsome fella at the Mark Twain Prize ceremony for David Letterman.

The breathtaking wooded ambiance fit perfectly with the centerpieces on the tables, which were designed by Ariel Dearie.

The Onteora Mountain House was the location of their wedding. The wispy setting made for some spectacular wedding photos, which were taken by photographer Jesse of Golden Hour Studios.

Tendler added her own special touch to the bridesmaids’ outfits. She handmade all the floral crowns for her bridal party, herself included!

They seemed to have had a traditional Jewish wedding with close friends and family in attendance, including Seth Meyers.

Back in 2014, it was reported that Ben Affleck allegedly groped Tendler at an award function.

Tendler came forward with her story in the wake of the Harvey Weinstein scandal when she tweeted a string of posts, accusing Affleck of grabbing her behind. She said the incident occurred in 2014 but that she had kept it to herself all these years.

Affleck was also accused of misbehaving with One Tree Hill’s Hilarie Burton and Canadian TV show host Anne-Marie Losique. He apologized to Burton, but there has been no confirmation of whether he has extended his apologies to Losique or Tendler.

“Like most women in these situations I didn’t say anything but I have thought a lot about what I’d say if I ever saw him again,” Tendler added.

Tendler collaborated with actress Amy Poehler on YouTube. The latter has a channel named Amy Poehler’s Smart Girls. She and Tendler created the show, The Other Side, which features Tendler and her makeup tips along with eerie ghost stories.

You can learn a lot of tips and tricks with makeup while getting spooked and chilled to the bone!

Annamarie Tendler has written two books on makeup and hairstyle.

In these books, Tendler is looking to educate people about the different styles of makeup and hair that you can do at home. As a believer in the do-it-yourself concept, the books promote their readers to get crafty.

Tendler explains that she wanted to have a Victorian-themed décor and was looking for the right lampshade. When she got tired of trying to find places that had her “perfect” lampshade, she decided to make one herself!

The makeup artist said that she watched a 1992 DVD in which a woman named Mary Maxwell taught the basics of making a lampshade. And after watching it, she made a “practice lampshade.”

Tendler threw out her first one, but she didn’t give up. She then began concentrating on the frame, fabric, lace, fringe, and more on the construction and decoration of the shade itself, before coming up with her unique shapes.

After much practice, she certainly perfected her craft and now has an online shop called Silk Parlor and has featured her work on the website.

It takes Tendler about 10 to 15 hours to make an eye-catching lampshade, and about 100 hours to do the more intricate ones!

Many factors go into the making of her shades. And she purchases them from vintage shops and flea markets, including Mood in New York (the same store featured on Project Runway).