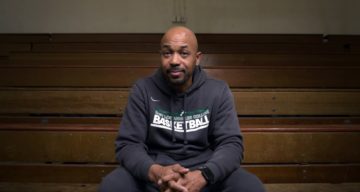 Netflix turns the spotlight on JUCO hardwood floors with Last Chance U: Basketball. The trailer already brought attention to John Mosley, the head coach of the East Los Angeles College Huskies. We will have to watch the new season when it premieres on March 10 to find out what made the coach go crazy in the locker room. But for those who want to know who the ELAC coach is, we have all the details in this John Mosley wiki.

John Edward Mosley was born on June 9, 1973 to John Mosley Sr. He is a native of California where he graduated from Washington Prep High School in 1991.

He enrolled in East Los Angeles College, where he played basketball and pursued a liberal studies degree. Before he’d graduate in 1993, Mosley had set the ELAC record and led the state in assists, averaging 11.1 per game.

Mosley went on to play at NAIA school The Master’s College (now The Master’s University) from 1994 to 1996. While pursuing his BS in kinesiology, he played alongside Mike Penberthy, former Laker and NBA pro.

Mosley later got his master’s degree in education from National University in 2000. He recently studied PE teaching and coaching at the Azusa Pacific University from 2015 to 2016.

Shortly after graduating from The Master’s University, Mosley began his coaching career at the same university. He was the assistant coach of the men’s basketball team from 1998 to 2006. Amid that, he was also appointed professor of physical education and kinesiology.

Mosley held similar positions at the University of California, Bakersfield, while he was there from 2006 to 2011. He then worked at Athletes to Business as a career coach from 2011 to 2014.

Also Read: Where Is John Hampton from Netflix’s “Last Chance U: Basketball” Now?

John Mosley returned to his alma mater of East Los Angeles College as head coach of the Huskies basketball team in 2012. He also served as the director of the Male Leadership Academy for two years, and is currently an instructor with the kinesiology department.

Last Chance U puts a focus on the team coaches, who don’t hold back from making their players Division I ready. John Mosley already has social media’s attention with the trailer alone.

John Mosley Jr. is married to LaShaunda Pierce Mosley. They are parents to three children—Jackson, Moriah, and Leah.

Jackson and Moriah Mosley are the two eldest children, and both are active on social media. The older Mosley kids are basketball players like their father.

Jackson is set to graduate from St. Francis High School in 2023. Moriah Mosley, the freshman class president, will graduate from VHHS in 2024.