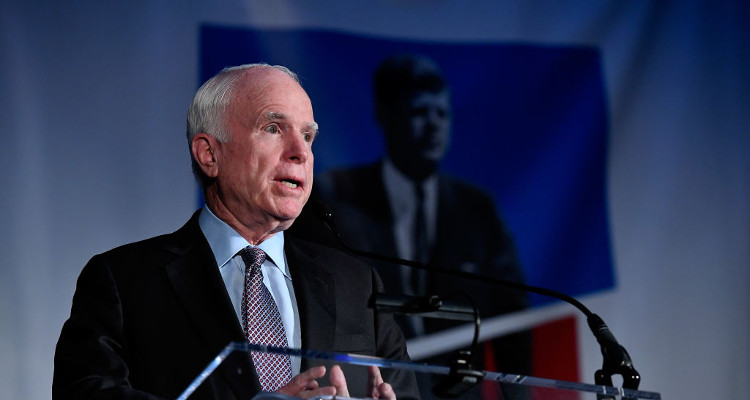 John McCain was the last senator to question James Comey during the former FBI director’s testimony before the Senate. But McCain’s bizarre questioning and and the fact that he called James Comey “President” sent the Internet into a frenzy, sparking a John McCain meme trend. Is John McCain senile? Probably not, but after news of his strange interrogation of Comey went viral, the Comey and McCain memes seem like the gift (or GIFs) that keep on giving!

After two and a half hours of questioning James Comey, it was Senator John McCain’s turn. His focus was Hillary Clinton’s emails and, somehow, McCain’s line of questioning left Comey, the Senate, and pretty much everyone watching, confused. His incoherence at such a tense political hearing has everyone asking if John McCain is okay. Even John Legend voiced his concern! To be fair, McCain did refer to the former FBI director as “President Comey” at one point, which was grounds for concern. Some even question if the senator has gone senile, considering the Republican is now 80 years old. But McCain joked that maybe it was because he stayed up late to watch the Arizona Diamondbacks game! So, it’s an understandable enough excuse that should quell any further questions regarding his physical and mental health…right? Probably not, since the Internet has gone crazy over McCain’s questioning. His own segment was the highlight of what should have been Comey’s show. The Internet’s reaction, as always, is filled with hilarious memes poking fun at the elderly senator. The Grandpa Simpson allusions can’t be stopped! Enjoy these John McCain memes to kick off your weekend; the laughter that will ensue might just hold you over ’til Monday!

#6. This is what they call second-hand embarrassment.

Not that I am a fan of #MarkRubio, but this is funny!!! ???? #ComeyHearings #JohnMcCain

#7. “United Hillary of Clintons” is the best part!

#8. The alligator would have made a stronger statement.

#donaldtrump #johnmccain #wow #disappointed but not #surprised #mccain has been a #flipflopper forever #trump #jamescomey #fbi #gop don't give a fuck #paulryan is like "what? He's a #puppet what did u expect?" #lmao #notmypresident #notmyamerica

#12 .Proof that The Simpsons predict everything.

#JohnMcCain was interviewed on the street shortly after #ComeyHearings …

I, for one, really enjoyed John McCain's Benadryl commercial

#17. Where is mocking Spongebob when you need him?

#19. Horseless carriages we get. Sky people?

I make it a rule not to post political stuff. But I just couldn't help it. #mccain #gop #makeamericagreatagain

#23. The most confusing man in the world. Stay thirsty, my friends.

#24. Everyone during McCain’s line of questioning.

ALL of my social media feeds during whatever is was #JohnMcCain did at the #ComeyHearing ???