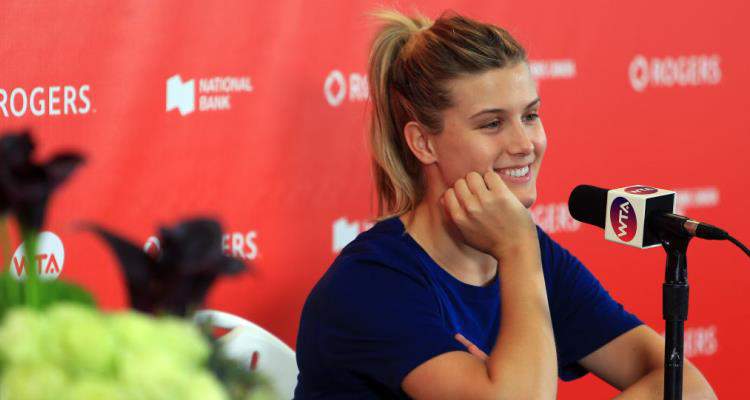 Who is Genie Bouchard’s boyfriend? Could it be the guy she went on a date with after losing a Superbowl bet on Twitter? It’s been 10 months since the Super Bowl when Genie Bouchard and John Goehrke went on a date for his big bet win, and now people want to know if they’re actually dating! A recent photo seems to look that way! Find out more about the mystery man with our John Goehrke wiki!

Who is John Goehrke?

John Goehrke’s age is 20 and he’s a marketing student at Missouri University. He’s originally from Chicago, Illinois and attended Vernon Hills High School. His favorite team is the Chicago Cubs and according to his Twitter feed, he’s huge Tiger Woods fan!

How Did Goehrke and Bouchard Meet?

It all started on Twitter when the Chicago native bet the Canadian tennis star (who’s now 23) that the Patriots would come back and win the Superbowl.

Before the game even ended, Bouchard sent out a tweet saying, “I knew the Falcons would win btw.” (Mind you, it was after the third quarter of the game when the Falcons were up with a 28-3 lead, so her odds seemed pretty good!) However, one hopeful Twitter user used that opportunity to challenge her assumption, and tweeted back at her, “if Patriots win, we go on a date?” Shockingly, Bouchard replied, “Sure.” We’re sure she didn’t see the Patriots turning the game around in the final quarter and win the Superbowl, but they did, and Bouchard made good on her promise of the bet!

Bouchard, being a woman of her word, honored the dating proposal and made arrangements to go out with Goehrke.

“She messaged me on Twitter last week just saying hi and everything, she gave me her agent’s contact and I called him,” said Goehrke to Fox Sports at the time of the first date. “When I called him, they had already had this idea and [he] just confirmed with me whether I could make it work. So I worked with him the next couple of days getting my flights and hotels figured out, which she was nice enough to pay for.”

They had their post-Super Bowl Twitter date in New York City, where Bouchard was staying at the time. The two attended an NBA Nets game, and it looked like it actually went great!

“We talked about a variety of sports things and then we talked about what we were thinking on our side while this whole thing was going down,” said Goehrke. “I kept telling her how amazed I was that she agreed to this without a picture or any info on me and she was happy that I ended up being ‘normal’ haha.”

He Made a Good First Impression

Whether it’s a job interview or a first date, first impressions mean a lot and Goehrke had to make his count if he wanted to survive the date, let alone aim for a second one.

“Yeah, so I got a ride over to her hotel and had one NBA media member in the car with me. When we got there he did a quick interview with me and then went upstairs and interviewed her before she came down. Then she came down and we met, I gave her a hug and said hi and gave the gift I had brought and then we walked out to the car and left for the game.”

What do you get the girl who has everything? Goehrke gave Bouchard a pair of Tiffany earrings! What a classy guy! Some girls can’t even get a guy to foot the bill for dinner, but Goehrke came prepared!

There Was a Second Date!

Their first date ended with a trip back to the hotel, where Goehrke got a kiss on the cheek from Bouchard and the promise of a second date! Looks like that dream came true because the potential couple were then seen on Bouchard’s Instagram account together, relaxing. Her Instagram shows that he visited her and the two played golf together—looking every bit of adorable! It’s not confirmed if they’re a couple or not at this point, but so far, they both seem to be enjoying each other’s company! For more of John Goehrke pics, head over to John Goehrke’s Instagram account.