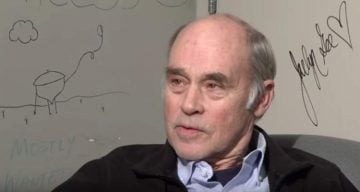 John Dunsworth of Trailer Park Boys has passed away. The beloved actor producer died on October 16, 2017 at the age of 71. He was best known for his role on the hit mockumentary, and our John Dunsworth wiki will let you get to know him better.

If you were a fan of Trailer Park Boys, then you must have loved Jim Lahey. The drunk police-officer-turned-supervisor of the hopeless Sunnyvale trailer park made people laugh until their stomachs hurt. But the actor’s sudden passing came as a shock, and we are mourning along with his loved one. Read on for details about John Dunsworth’s cause of death and wiki.

A Legacy Left Behind

John Dunsworth was born on April 12, 1946 to Frances and Frank Dunsworth in Bridgewater, Nova Scotia, Canada. He was the second child of 10, and the family grew up in Halifax. Dunsworth went to the University of Guelph, where he studied acting, but left in his fourth year.

He was 30 years old when his acting career began, but just before that, in 1970, he purchased an old and abandoned Halifax waterfront building, and turned it into a theater. He named the building Pier One Theater and it soon the most famous alternative production houses in Halifax.

An Audition That Changed His Life

Dunsworth was soon known as a producer and became a well-known casting director in Halifax after founding Filmworks Casting in 1987. In the mid-’90s, he auditioned for a small role in Mike Clattenburg’s short film One Last Shot, but as filming went on, he ended up having the leading role.

The film was shown at the Atlantic Film Festival, and Dunsworth won the Best Performance award for it. The actor is credited with a lot of appearances in CBC radio dramas, and the Neptune Theater Company has seen him in lead roles in numerous productions.

The Birth of Jim Lahey

Using his character in the short film, Dunsworth went on to develop Jim Lahey for Trailer Park Boys. The funny, and often drunk, supervisor of the fictitious Sunnyvale Trailer Park. On the show, he is almost always drunk, and his comedic slurring cracked up even the best actors.

The comedic actor was known for his quirky acting style, and his antics on Trailer Park Boys. Dunsworth’s quotes on the show were almost always about liquor, with fans typically repeating ones like “I’m sober enough to know what I’m doing, and drunk enough to really enjoy it,” and “Randy… I am the liquor.”

John Dunsworth’s net worth is estimated to be $500,000. He was a boating enthusiast and admitted to once having a gambling addiction. But during his recovery, he worked to remove video lottery terminals in Nova Scotia’s bars. Unlike his character on the show, Dunsworth rarely drank alcohol!

John Dunsworth and his wife and had four children, three daughters and a son. Sarah and Molly Dunsworth both followed in the footsteps of their father. Sarah acted alongside him on Trailer Park Boys, and is a costume designer too. She married Ben Nickerson and is a stepmom to daughters, Mary and Ella. They tied the knot this past May after being engaged for a month.

John Dunsworth’s cause of death was stated by Sarah on Twitter as “a short and unknown illness.” He was 71. We will miss the amazing actor dearly.