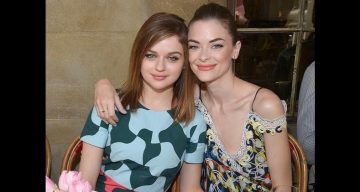 Do actresses Jaime King and Joey King share a relation? Joey and Jaime have the same last name, which always seems to spark questions about their relationship. Some even wonder if Jaime King is Joey King’s mother. We’ve got the truth about Joey King’s connection to Jaime King, right here.

Many Hollywood celebrities share the same last name, even if they share nothing else. For example, Kristen Stewart and Martha Stewart, Audrey Hepburn and Katharine Hepburn, Denzel Washington and Kerry Washington.

However, when some see a common last name, they immediately assume that there must be some sort of relationship. It happens to actresses Jaime King and Joey King all the time.

Are Joey and Jaime Related?

Joey King, who is known for her role as Elle Evans in The Kissing Booth, recently celebrated her 19th birthday. Tons of celebrities and fans wished her well on her birthday, like Jaime King. 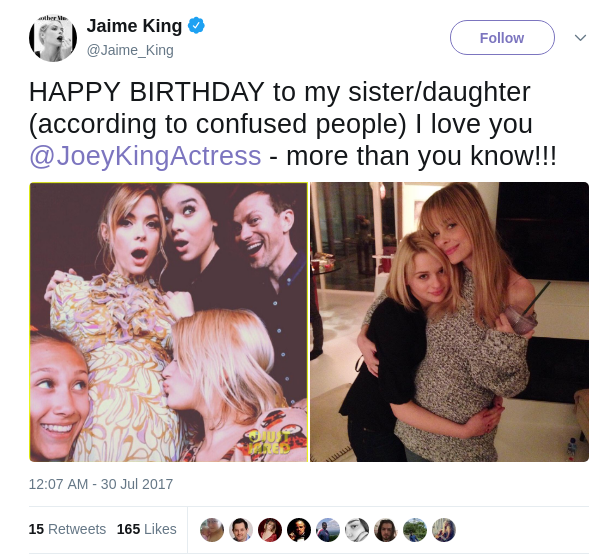 Since then, many began to wonder about their connection. Some just assumed Jaime King was Joey King’s mother, but that is not true.

In fact, Jaime and Joey King are not related to each other at all. The only other thing they really have in common other than their last name is the that they both work in the Hollywood industry.

Last year, Jaime King replied to Jaime King’s tweet and clarified that she is not her daughter or her sister, but in her heart, she is related to her. 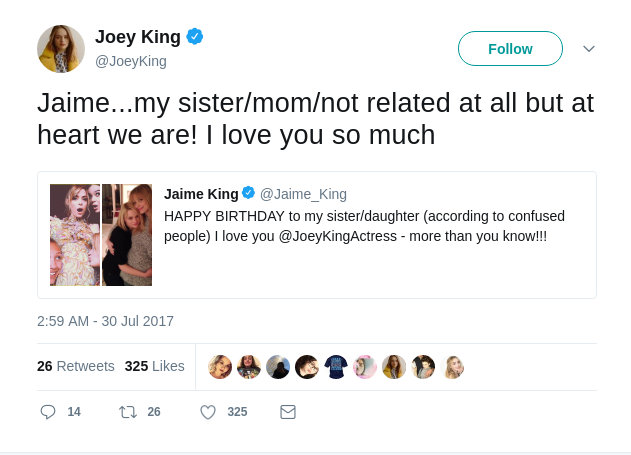 In the caption, she wrote, “To my little sister. I love you SO DAMN MUCH! Should have posted the dumb pap shots of me knocked up in overalls with you looking super cute but your makeup looks dope in this one. Always. Happy Birthday!! @joeyking”

Naturally, this post sparked even more rumors that Joey is Jaime’s sister! People began a long list of questions in the comments section, asking if they were actually sisters.

Jaime and Joey King are very good friends and have often been spotted spending time together. Joey considers her as a fashion idol and a “big sis,” but the truth is that they are not related by blood.

In an interview, when she was asked what she likes about Jaime, Joey revealed, “Oh my god. Literally, her closet is the greatest thing in the world. A lot of people think we’re related too. We’re actually not. But we want to be.”

She added, “We went out to breakfast or lunch one time and I had on this like vintage dress. It was fine. She had these Chanel overalls on. I’m like, ‘Dude. Kill me. Get out of that. I look stupid next to you.’ She was like, ‘What?’ And she had her cute little baby bump. I was like, ‘Stop. Looking so cute all the time!’”

So again, even though these two make it seem that way sometimes, Jaime and Joey King have no relation to each other. They are two actresses who share nothing but love for one another.

Not only is Jaime King an actress, but she’s also a model. She started modeling at the age of 14 and has been featured in several magazines such as Vogue, Mademoiselle, and Harper’s Bazaar.

She is married to Fanboys director Kyle Newman and the couple has two sons together. Jaime King’s kids are named Leo Thames Newman and James Knight Newman.