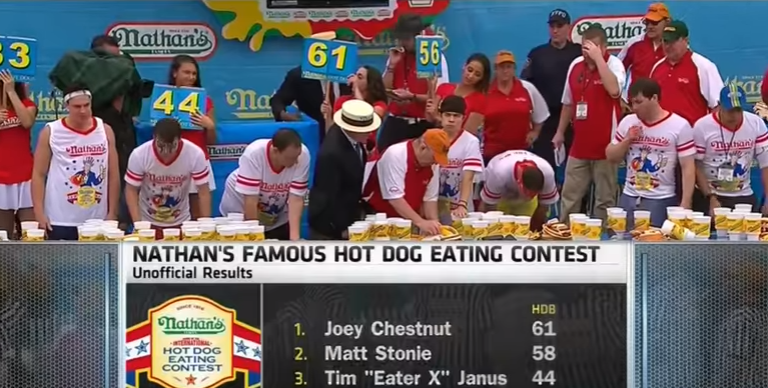 If you love wieners then we have some good news for you! Joey Chestnut has just broken another record and the day’s not even over yet! Many have been wondering about the food conqueror, and want to know all the information they can on the eating machine, including Joey Chestnut’s salary. If you’re curious to know more then take a look at our Joey Chestnut wiki.


Where is Joey Chestnut From?

With a stomach like Joey “Jaws” Chestnut’s, you have to wonder where he came from. Chestnut, 33, is from San Jose, California and earned a civil engineering degree at San Jose State, before he decided to get paid to eat full-time.  Joey Chestnut’s weight is roughly 230 lbs, and that’s before he eats his weight in food!

Joey Chestnut’s job is to eat, that’s all. His net worth is unknown, but he once made $300,000 in a year from food eating contests alone, according to the San Diego Union-Tribune.

“If I wasn’t doing this, I’d be working in construction management or be a project manager for a general contractor,” he said. “It was a hard decision to give up a normal job. I worked hard to get through school. You go from building a fire station to an eating contest.

“It was hard for me to take competitive eating serious at first. When I made people happy, I became addicted to that. It’s been a fun, fun ride.”

Chestnut might be good with his mouth, but not to the point where it’s earned him a girlfriend! It must be hard to line up marriage prospects while inhaling a whole animal.

“There’s a reason why I’m single,” said Chestnut. Competitive eating is hard on his clothes, stomach and his love life, and frankly, it’s disgusting—but you don’t have to tell Chestnut that! At the moment, Chestnut is single and single-handedly winning every competition, one mouthful at a time.

Chestnut has traveled to Minneapolis to scarf down tacos at a zombie pub crawl and devoured ice cream sandwiches at Petco Park in San Diego. But on the Fourth of July, Chestnut celebrated by winning his tenth hot dog eating contest at the 101st Nathan’s Annual Famous International Hot Dog Eating Contest in New York! His prize: $10,000 in prize money.

“Next year, if I come back, you can bet I’ll be pushing harder,” Chestnut told ESPN2 shortly after winning the event. “I treat competitive eating like a sport, it’s not like going to a buffet, I’m not a buffet buster. I train, I fast, I tape my practices and try to figure out how to improve. I make my body work for me and I’ve been really lucky for how its performed.”

Joey Chestnut’s endorsements are unknown at this time, but we do know that he has been recognized by some very influential people.

“I met (NBA star) Steph Curry and he knew who I was,” Chestnut said. “His wife was cooking at a food demo. He was like, ‘Oh my God, you are the hot dog guy.’ That’s better than when I first started. People would say, ‘I thought the Japanese guy (Kobayashi) was the champion.’

If you’ve got a strong stomach, you can check out the video of Joey Chestnut’s hot dog eating win below!