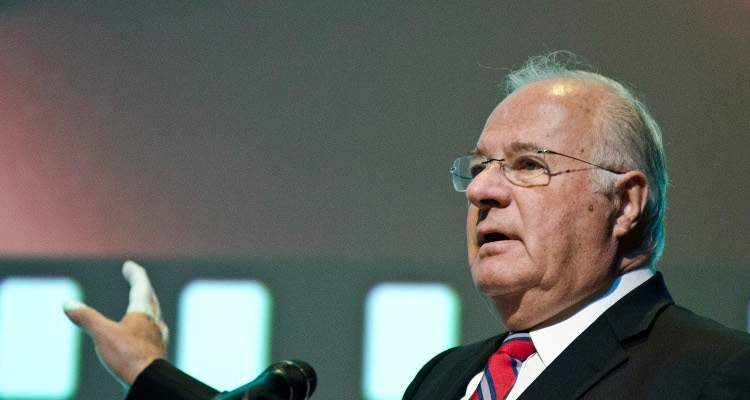 Joe Ricketts is one of the most prolific businessmen in the United States. While Ricketts started his entrepreneurial journey with the firm, First Omaha Securities (today known as TD Ameritrade), he soon moved on to multiple ventures in no time. He also started the popular website, DNAinfo.com in 2009, which he abruptly shut down yesterday.

The decision to pull down the digital news service was taken after its employees voted for unionization a week before. But, Ricketts claims that the website wasn’t economically viable, so it had to be shut down.

Ricketts always has an eye out for business opportunities. This is what led him to start companies like High Plains Bison and The American Film Company.

Keep reading to know more about him in our Joe Ricketts wiki.

Joe Ricketts’ Journey as a Billionaire

But this lone venture could hardly satiate the entrepreneur in Ricketts, so he soon started looking for other moneymaking opportunities. First Omaha Securities was renamed TD Ameritrade, after Ricketts acquired TD Waterhouse for $2.9 billion in 2006.

In 2004, Ricketts stumbled upon the idea of starting High Plains Bison, which is a retail outlet for natural Bison meat. He further founded The American Film company in 2008 followed by the much sought after DNAinfo.com in 2009.

Besides being a shrewd businessman, Ricketts had a keen interest in politics from the very start. He, along with Eric O’Keefe, Leo Linbeck III, and Tim Dunn, co-founded the Campaign for Primary Accountability that targeted incumbents in the primary elections. He also led various other campaigns in the years to come with some of the most crucial ones being one against earmarks and wasteful federal funding.

Ricketts has also served on the panel of the American Enterprise Institute. And, he is known for starting the political action committee, The Ending Spending Fund.

Impressively, Ricketts even tried to help defeat Barack Obama in the 2012 election and had also opposed Donald Trump at the start of 2016 presidential election. However, his pro-Hillary stand soon changed, with him donating $1.0 million in support of Trump.

The businessman continues to stand by Trump even today. And, he has recently written a letter in defense of the president on his blog.

The billionaire is also a budding philanthropist and the owner of the Opportunity Education Foundation that works on providing pieces of training to teachers and students in third world countries.

The End of DNAinfo and Gothamist

After successfully running for almost a decade, Joe Rickett’s DNAinfo site was shockingly shut down yesterday. The abrupt closure has caused havoc in the world of local journalism and has rendered hundreds jobless within minutes.

The end of DNAinfo also came with a full stop on Joe Rickett’s Gothamist, which is a blog that catered to worldwide news, as well as local coverage. While Ricketts claims economic viability and loss of profits as the main reason for closing shop, the decision came soon after his employees decided to unionize with the Writers Guild of America, East.

You can read the letter here.

Ricketts mentioned that he hated unions in his open letter, posted yesterday. So, could this be the reason behind his somewhat reckless decision to shut down DNAinfo and the Gothamist?

Joe Ricketts was born to Florence M. Erhart and Donavon Platte Ricketts on July 16, 1941. He was raised in Nebraska City and went on to obtain a bachelor’s degree from Creighton University, Omaha.

Ricketts is married to Marlene Margaret Volkmer. They have four children together—Thomas, Pete, Laura, and Todd.

Joe Ricketts’ family is entrepreneurial just like the billionaire himself. Ricketts, along with his sons and daughter, own a 95% stake in Major League Baseball’s Chicago Cubs and Wrigley Field.  The Ricketts family also owns a reported stake of 25% in the TV network, CSN Chicago.

Ricketts’ eldest son, Pete Ricketts, is a politician and the ex-governor of Nebraska. He is also a member of the Republican Party.

Laura Ricketts, Joe Ricketts’ only daughter, is a gay rights activist and a board member of Lambda Legal, in addition to her interest in the Chicago Cubs.

You’re brother was so sweet in taking the time to allow us to snap a photo with him. #Thanks for all you’ve done for @Cubs fans! pic.twitter.com/hwViEARZAx

Ricketts’ younger sons, Thomas and Todd Ricketts, own varying stakes in TD Ameritrade and the Chicago Cubs. Thomas Ricketts is also the CEO of the Chicago Investment Bank.

With his recent decision to shut down digital news services DNAinfo and the Gothamist, Joe Ricketts has invited severe flak from the journalism communities in the United States. And, the widespread unemployment of hundreds of journalists is a cause of critical concern.