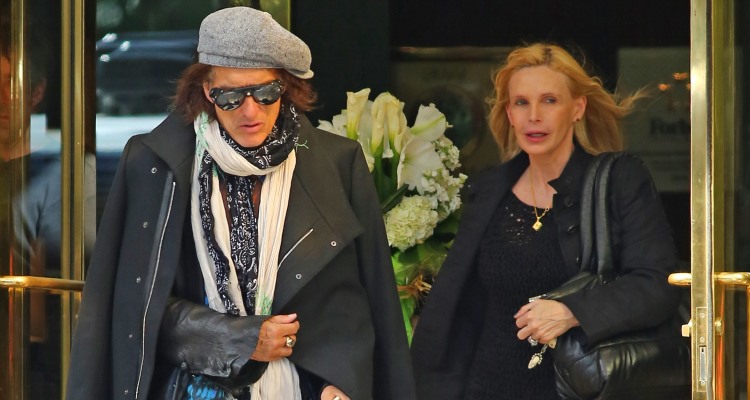 What happened to Joe Perry? That’s the question everyone has been asking since Joe Perry collapsed on stage in New York yesterday. The 65-year-old Joe Perry, guitarist for Aerosmith, was performing with Alice Cooper and Johnny Depp as a member of their ‘70s tribute band, The Hollywood Vampires. His wife, Billie Paulette Montgomery, updated fans using Twitter to keep everyone up-to-date. Terms like “Joe Perry condition” and “Joe Perry cardiac arrest” have now been trending after the famous guitarist collapsed and is now in stable condition. Now, “Joe Perry wife” is trending and once you’re done reading this, you’ll be an expert on all things Billie Paulette Montgomery.

Her Face Is on Joe’s Guitar

In Joe’s 2014 memoir Rocks: My Life In and Out of Aerosmith, Perry reveals that he has a picture of his wife’s face on his Gibson guitar. Isn’t that sweet? The couple have been married since 1985 and have two sons together, Adrien and Tony Perry. Montgomery has a son from a previous marriage and Perry also has a son from his first marriage.

When the two met, Montgomery didn’t even know who Aerosmith was, unlike all his female fans with whom he had slept before he settled down. They met while Perry was making his “Black Velvet Pants” video, and when they got married, Montgomery said she was more into the underground punk scene, so she wasn’t too familiar with her husband’s job.

“She’d heard a couple of songs on the radio, and that was really about it,” Perry said in a Radio.com interview. “And it wasn’t until a few years later when we were living together that she was going through some old boxes of stuff, she saw some magazines from the ’70s, some gold records here and there.”

The Family Spends Time In Boston and Florida

Aerosmith is one of the most famous rock bands of all time and Perry hasn’t abandoned his roots. Perry is a Lawrence, Massachusetts native while Montgomery is actually an Indian native. The family still live in the Bay State and have a home in Duxbury. They also split their time between Boston and Florida because Perry loves the water. She even wanted to be a marine biologist once upon a time!

Montgomery isn’t just some trophy wife that just sits around and wait s for the money to roll in! She actually has a job that brings her passion and purpose. In order to keep tabs on Perry, fans have to follow Montgomery on Twitter and Instagram. If it weren’t for her and her tweets, fans wouldn’t have known how her husband was doing as soon as they did. Her handle for both social media sites is “Billie Perry.” Be sure to check her out!