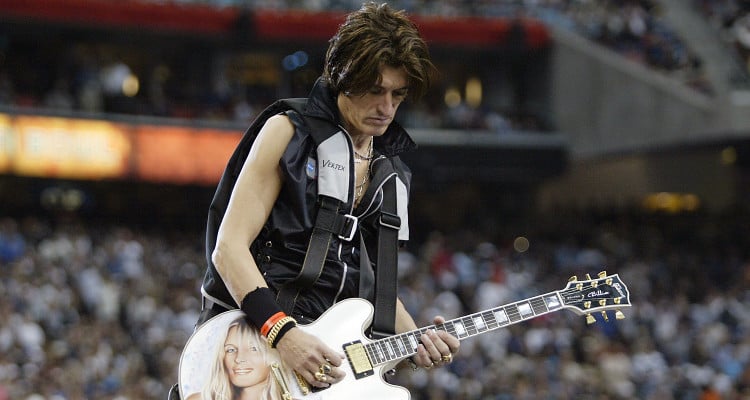 Everybody’s heartbeat stopped for a minute when they heard the news of the Joe Perry collapse. Those who attended the concert are very well aware about the Joe Perry cardiac arrest. Following this news, everybody is asking themselves, “Is Joe Perry dead?” If you are searching for Joe Perry news then keep reading further.

Joe Perry, the guitarist for Aerosmith, suffered a cardiac arrest while performing with Alice Cooper and Johnny Depp during a show in Brooklyn, New York, yesterday (July 10). The Joe Perry collapse was terrible because he sat down and struggled to play during the Hollywood Vampires’ first song. In the video, he can be seen collapsing on the stage as the band continues to play. Paramedics then rushed in to help Joe Perry during the Coney Island concert.

Many sources claim that he had to sit on a drum kit and then went behind a small wall and passed out. In many of the videos posted by fans regarding the Joe Perry heart attack, paramedics can be seen rushing towards the 65-year-old star before getting off the stage. Joe Perry was hospitalized after suffering from cardiac arrest. However, sources claim that his condition is stable now and he is recuperating.

So, to answer the question “Is Joe Perry dead?” the answer is: No. He is not dead, but he is hospitalized. One of the eyewitnesses said that CPR had to be administered to Perry after he collapsed. He was later taken to Coney Island Hospital. Sources claim that initially he was in a critical condition, but now he has been moved to New York-Presbyterian Hospital on the Upper East side. The band has been on tour since May. They continued playing even after Perry left the stage, and Cooper later broke the news to the crowd around 10:00 p.m. He said, “If you notice one of our brothers is not on stage with us, he was very sick before the show.”

The Joe Perry cardiac arrest news made his fans really sad, but we are glad to report that he is in a stable condition now. We wish him a speedy recovery and hope that he comes back to the stage to astonish us with his amazing guitar skills. Meanwhile, you can watch the video of the Joe Perry collapse. Let us know your opinion about the incident in the comments section below. Do you think he will perform in the rest of the tour?