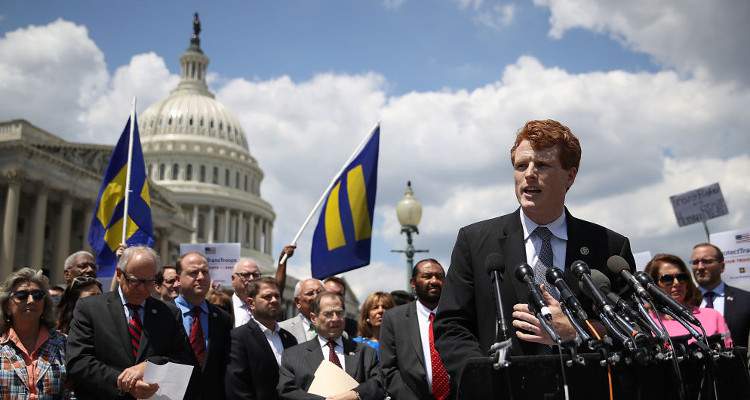 Former Attorney General and U.S. Senator Robert F. Kennedy’s grandson, Joe Kennedy III, is worth millions; a fact most everyone knows. But many are wondering, just how rich is Joe Kennedy III? His net worth is estimated to be between a whopping $19.0 and $43.0 million! Astute to the core, Kennedy had made some really smart moves in the financial market, which made him some quick money. Read all about Democrat Joe Kennedy III’s net worth in 2018.

Immediately after President Donald Trump’s State of the Union address, the response speech from Democrat Joe Kennedy III was phenomenal. The speech ripped apart the president’s claims and his logic behind all his policies! Who is the man daring to defy Trump? We’ve got all the details on the U.S. representative causing a stir, right here.

Joe Kennedy III hails from a very rich family and is also a part of the Kennedy family fortune. He is the grandson of the Sen. Robert S. Kennedy, and great-nephew of Senator Ted Kennedy and President John F. Kennedy. He is estimated to be worth between $19.0 and $43.0 million, which is reportedly due to his investments and trust funds. He has invested very carefully and has made millions for himself and his family.

How Much Is Joe Kennedy III Worth?

Joe Kennedy III has a huge chunk of his wealth tied up in trust funds and bank accounts. He has a common trust fund estimated at $5.0 million and has a stake in Exxon Mobil worth $750,000.

Who you worship. What you look like. Who you love. Our differences make us strong – not weak. Thanks to @theracgram for raising your voices. #RAC17

According to sources, Kennedy is the 22nd richest person in Congress, but his personal ranking has decreased by seven percent. So, his position could have slipped, as well.

Here is where Joe Kennedy III’s net worth stands compared to his fellow Democrats:

Joe Kennedy III’s wife, Lauren Anne Birchfield, was reportedly in debt in 2015, despite him being one of the richest men in the Congress.

According to sources, his wife is chipping away at the $50,000 she owes in student loans! Apparently, at one time, the couple was at least $750,000 in debt from mortgages for their homes on the East Coast!

Wishing a happy #MothersDay to all of the moms & grandmothers enjoying today!

Joe Kennedy III invested thoughtfully in the pharma and tech industries. These are touted to be the ones that will rarely see a downslide, since demand for both usually remain high.

Here are some details according to Open Secrets:

Joe Kennedy III has been against almost all of Trump’s policies and has taken a stand. At last night’s State of the Union address, Kennedy unleashed a bit of fury in response to Trump’s speech.

Kennedy stood up on the podium and delivered a message of inclusion for the entire country, and not just for those many believe Trump favors. He accused Trump of presenting Americans with “one false choice after another” based on the premise that “in order for one to win, another must lose.” He said the administration had asked them to pick between “coal miners or single moms, rural communities or inner cities, the coast or the heartland.” But Kennedy preached that the country is stronger than anything together.

“We fight together,” he declared. “Because the strongest, richest, greatest nation in the world should not have to leave anyone behind.”

As it journeyed across the country, the Save My Care bus collected the strength and decency of American families and channeled that energy into our enduring fight for compassionate health care. It is a fight for the character and content of this nation. And make no mistake: It's a fight we'll win.

For the man touted to be the one of the “potential 2020 presidential contenders,” Joe Kennedy III’s speech was big, but the impact was even bigger.