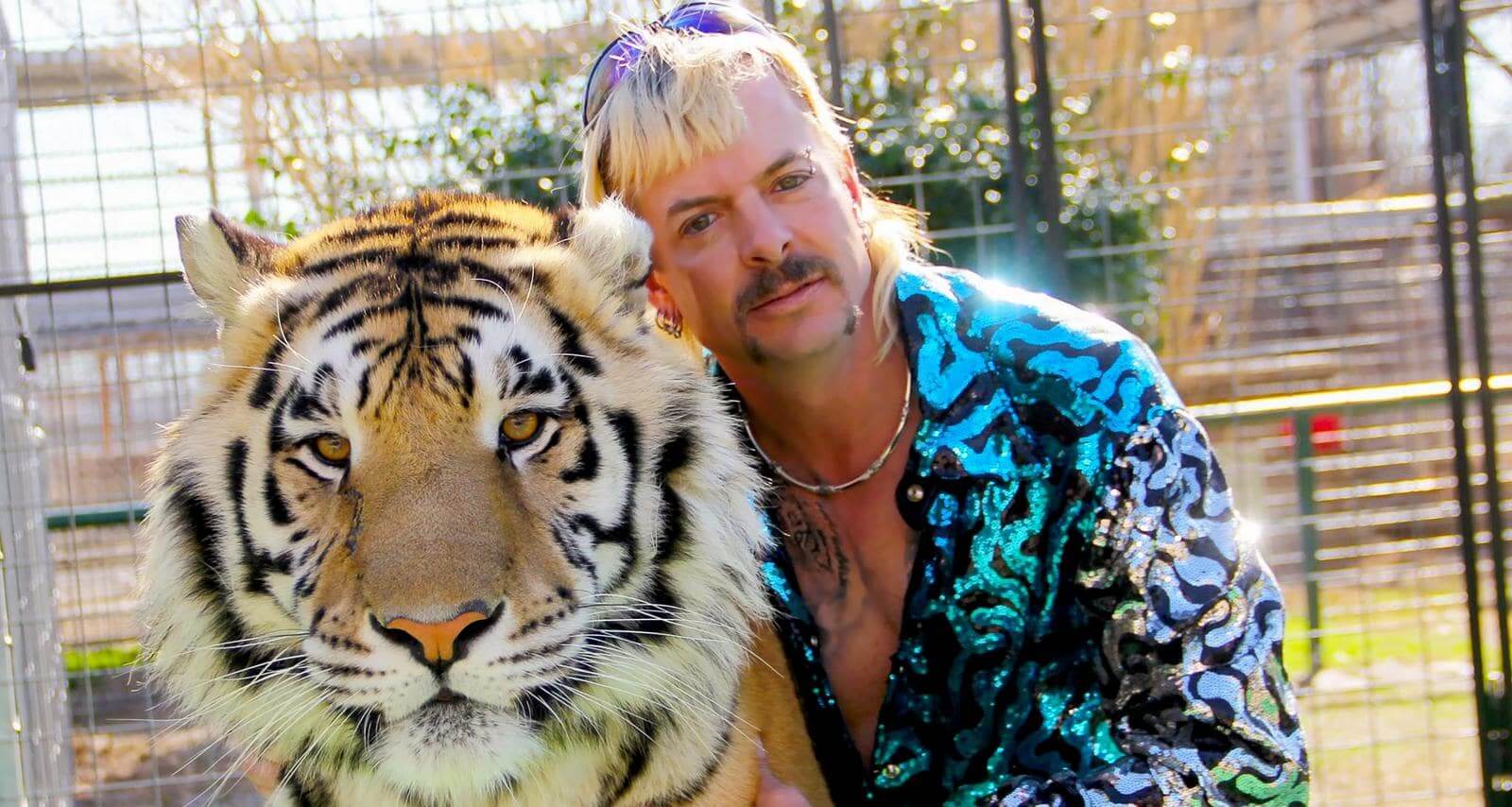 Netflix’s true-crime library is expanding with the streaming giant’s latest offering, Tiger King: Murder, Mayhem and Madness. The docuseries delves into the intriguing murder-for-hire story of Joe Exotic, made infamous by the eponymous moniker “Tiger King.” He led a crazy and wild life, with a roadside zoo where he bred big cats, a presidential bid, and a deadly feud with animal rights advocate Carole Baskin. Ahead of the March 20 premiere, we’ve explained what happened and where the Tiger King is in Joe Exotic’s wiki.

Joe Exotic Was Once a Police Chief

Born Joseph Allen Schreibvogel on March 5, 1963, he grew up on a rural farm in Kansas. He was one of five children born to a wealthy farming family there. Joe would later go by Joe Maldonado-Passage, or his public persona, Joe Exotic, and set up base in Wynnewood, Oklahoma.

Joe and his siblings grew up not very pampered and reportedly didn’t hear “I love you” often, if at all. Joe believes the five of them were more farmhands than children to their parents. He wasn’t close to his siblings, either, except for his older brother, Garold.

When Joe was 14, the family relocated from Kansas to Wyoming and then to Texas where they lived on massive properties.

After graduating from high school in 1982, he joined a small police department in Eastvale, Texas. When was 19, he was promoted to chief of police among the handful of officers in the department.

The former Joseph Maldonado-Passage earned his public persona, Joe Exotic, and the moniker “Tiger King” for his massive private zoo in Wynnewood. The zoo that was spread across 16 acres housed tigers, lions, alligators, bears, and even the tiger-lion hybrids, ligers. Visitors to his zoo could pet the tigers as well.

His brother Garold shared his dream of owning exotic animals. Together with Joe’s first husband, they ran a pet store in Texas selling reptiles, birds, and small fish until they could expand their business. Garold tragically died in October 1997 after being hit by a drunk driver.

With the $140,000 his family won in a lawsuit related to Garold’s death, Joe bought 16 acres of land in Wynnewood and built cages on it. Two years after Garold’s death, Joe opened his private zoo. Some of the early animals were from locals who dropped off their exotic pets they didn’t want to keep.

A deer and a buffalo, two of Garold’s pets, were the zoo’s first residents. Eventually, the inhabitants included a mountain lion and a bear. In 2000, Joe acquired his first two tigers, Tess and Tickles. He went on to raise their cubs.

A later boyfriend of Joe would organize a traveling show of animals and magic with Joe at the center. Joe performed in Oklahoma and Texas with different stage names, but Joe Exotic was the one that stuck.

Joe Exotic gained notoriety as a flashy exotic breeder of tigers, lions, and ligers for his profit. At its peak, the zoo housed thousands of animals. The zoo would feature in shows Joe produced and starred in from his own personal broadcasting studio.

The gun-toting, mullet-headed zookeeper had a few run-ins with the law for animal cruelty over the years. Inbreeding was another problem animal rights groups suspected was going on at the zoo. He would also be fined for violations like inadequate veterinary care for the animals.

But his questionable ethics also clashed with Carole Baskin, animal rights activist and founder of Big Cat Rescue. Joe’s feud with Baskin escalated when she won a $1.0 million civil lawsuit against him in 2013. Since then, Joe had wanted to bring her down.

He lost a lot in the process and over the years, became disillusioned with the grand zoo he’d opened in his brother’s name. He eventually moved to Florida with his current husband, where he worked in a local eatery. Joe had to leave his zoo to his business partner, Jeff Lowe, who he didn’t get along with. Lowe began the process of dismantling Joe’s zoo after he left.

The last time Joe had lived in Florida, his neighbor worked at an exotic animal park and often brought home baby lions and monkeys for Joe to bottle-feed. That was what prompted Joe to start his private zoo.

Don’t Miss: From John Lawson To Pazuzu Algarad, Complete Story Of The Self Proclaimed Satanist

Joe’s love life has been turbulent to say the least.

While working as a cop in the ’80s, Joe was beginning to explore his sexuality. Around that time, one of his siblings told their father that Joe was gay, and his father disowned him.

A disheartened Joe attempted to kill himself by driving off a bridge in his police cruiser. He survived but had to undergo months of physical therapy for his injuries in Florida, where he lived with a boyfriend.

Joe went on to meet one Brian Rhyne, and married him in 1986 in an unofficial ceremony. The two of them, with Joe’s brother Garold, ran a pet store together in Arlington, Texas.

Rhyne was with Joe when he started the zoo. In December 2001, Rhyne tragically passed away of a deadly infection and Joe held his funeral at the zoo.

Within a year, Joe was dating an event manager, J.C. Hartpence, who transformed the private zoo into an animal and magic show for kids. Joe, an infamous polygamist, began a relationship with a young employee, John Finlay, too.

Hartpence reportedly became addicted to drugs and clashed with Joe for wanting to convert the zoo into a rehab and release sanctuary for animals. Joe wanted to run his lucrative breeding business and essentially threatened to feed Hartpence to his largest tiger. Hartpence responded by threatening to shoot him, and was arrested. Years down the road, Hartpence wound up in jail for both molesting a minor and murder.

Travis Maldonado was a recovering meth addict who joined Joe’s zoo in 2013. Less than a month after he arrived at the zoo, Maldonado and Finlay married Joe in a three-way ceremony.

But Finlay’s relationship with Joe soured over the course of the year. Joe’s obsession with the zoo and his TV show had driven a wedge between them. Then, in August 2014, Finlay reached his breaking point and attacked Joe. He was arrested and charged with assault and battery. Finlay would later improve his life without Joe.

Later, Joe and Maldonado had a legal ceremony. Tragedy struck again on October 6, 2017, when Maldonado accidentally shot himself in the head with a Ruger pistol while trying to prove that the gun wouldn’t fire without a magazine.

Though the magazine was removed, there was a bullet in the chamber, which fired and killed Maldonado. He was dead before first responders arrived, at the age of 23.

Joe lost his drive to run the zoo after Maldonado’s death. As his problems mounted and his frustration with Baskin grew, he married Dillon Passage in December 2017.

Carole Baskin, who founded Big Cat Rescue and had become an enemy to private zoo operators, wrote scathing articles about a traveling animal act. She soon realized the show was run by Joe Exotic, under different stage names.

When she found out that he had been using the Big Cat Rescue name and logo to advertise his shows, she sued him for trademark infringement. Joe had to pay $1.0 million in compensation after a bitter year-long court battle where he went on a tirade against Baskin.

Joe filed for bankruptcy and dissolved the foundation named after Garold to thwart Baskin’s collection efforts. Meanwhile, his paranoia led him to post social media threats of explosives and guns to intimidate concerned animal rights activists.

He continued to go on an aggressive threat campaign against Baskin through his TV show. A fire in 2015 would destroy his studio and kill most of his alligators.

A seemingly unhinged Joe would go on to make a failed presidential bid as an independent during the 2016 election.

A failed settlement, Baskin’s attempts to collect the millions, and Joe’s clashes with Lowe sent Joe over the edge. When a man named James Garretson expressed his business interest in Joe’s zoo, Joe asked him if he knew any hitmen who would take out Baskin for $10,000. Garretson dismissed Joe’s request, but it seems Joe was far from done.

In February 2017, Joe offered an employee, Ashley Webster, a few thousand if she would “put a bullet in” Carole’s head. Webster laughed it off, quit after two weeks, and left Baskin a voicemail warning her about Joe’s murderous intent.

Baskin and her attorney turned the voicemail over to federal agents, who were looking into wildlife violations at Joe’s zoo. Meanwhile, Joe’s obsessive threatening of Baskin and Garretson’s growing dislike for Joe over his mistreatment of the animals led Garretson to become a confidential informant for the federal agents.

The plan was for Garretson to introduce Joe to a hitman, who would be an undercover federal agent. Garretson caught wind of Joe attempting to hire a zoo employee to kill Baskin. He recorded conversations with Joe and Lowe to collect evidence of a murder for hire. The case continued to build against Joe, who allegedly killed five aging tigers in October 2017.

With the money Joe paid upfront, the employee ran off with no intention to actually kill Baskin. But the agents, Garretson, and Baskin had taken precautions for her safety just in case. When Joe realized he was ripped off, he let Garretson set him up with a hitman who was an undercover agent. 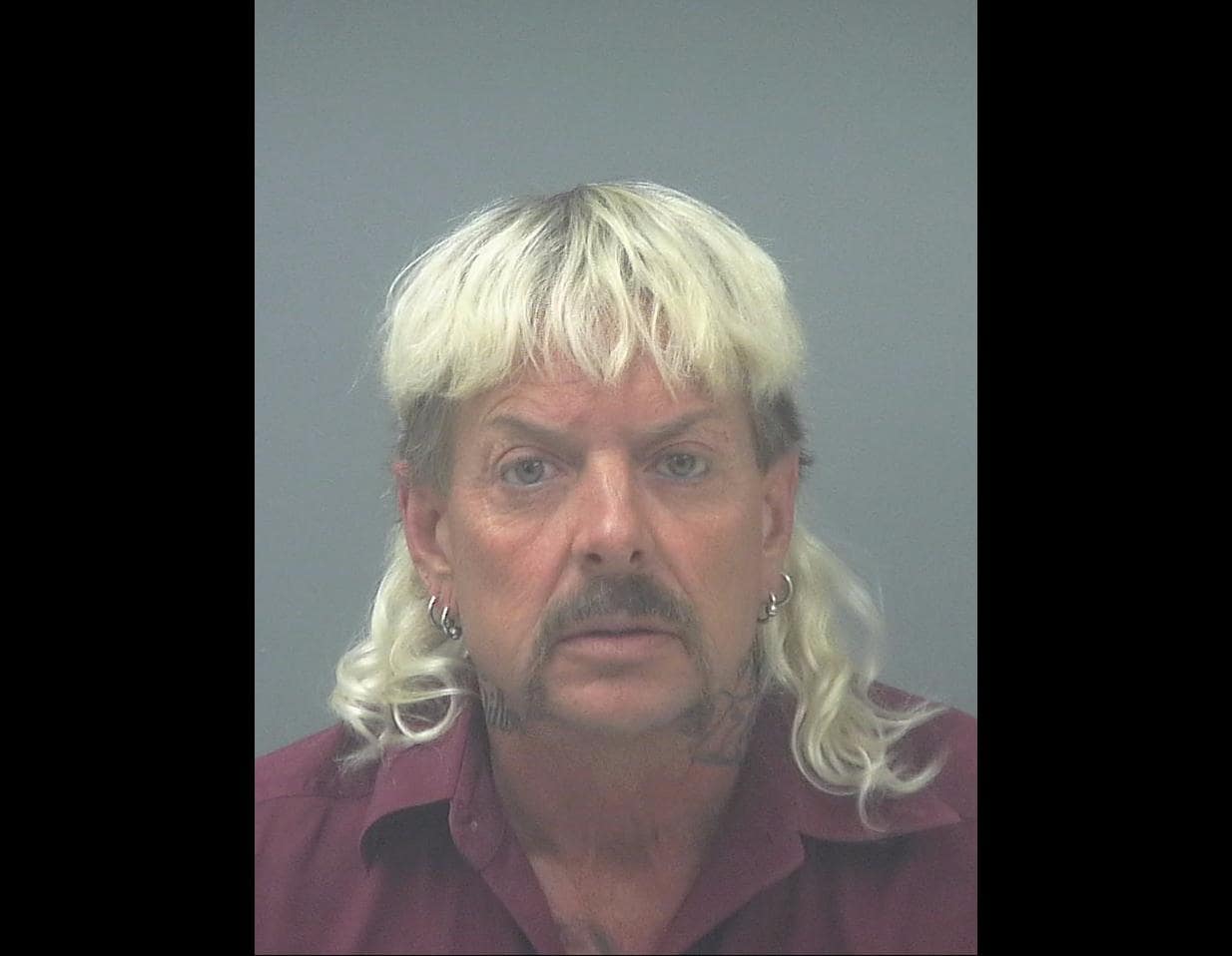 Joe met the fake hitman, but no money was exchanged. While agents were building a case against him, Joe had a falling out with Lowe and one day, he and husband Dillon left the zoo and moved to Florida. It was in Florida that Joe was arrested for plotting to kill Carole Baskin.

His trial began in March 2019. He was charged with attempted murder for hire and violating federal wildlife laws. A zoo employee started the trial by revealing that Joe shot and killed five tigers to make room for new animals.

Joe also went on to blame Lowe throughout the trial. But Lowe wasn’t called to the stand even once.

He was sentenced to 22 years in federal prison. During the trial, he was held in Grady County jail. He is currently in custody awaiting designation to a facility under the Bureau of Prisons.

Documentaries on his life had been in the works during the trial. But the Tiger King heatedly contended he didn’t get any of the money. All the money from the rights to his life story goes to his current husband, Dillon Jacob Passage, who moved to Texas.