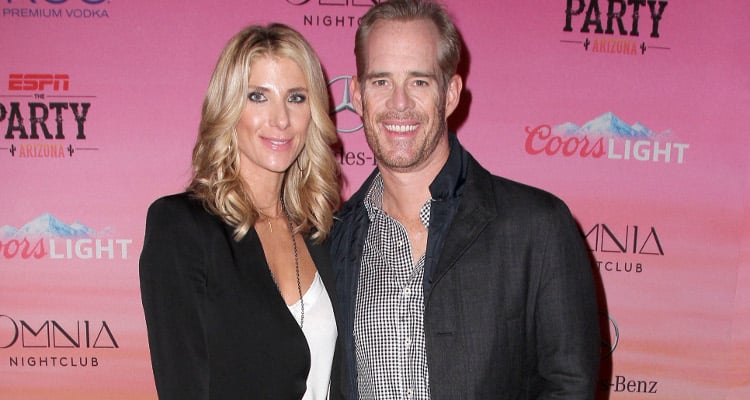 (L) and sportscaster Joe Buck attend ESPN the Party at WestWorld of Scottsdale on January 30, 2015 in Scottsdale, Arizona. (Photo by John Parra/Getty Images for ESPN)

Hosting any type of live show or even just appearing in front of the camera can be quite unnerving. In this industry, looks seem to be more that much more important, especially with millions of people judging you on your appearance. Indeed, it is a sad truth and who can understand better than Joe Buck. Joe Buck is an American sportscaster who has won several Emmy Sports awards for his outstanding work. Apart from his amazing play-by-plays, we will provide you with some pertinent information about him in our Joe Buck wiki, including Joe Buck’s net worth.

In an interview held in 2011, Joe Buck told viewers that a certain virus in his vocal cord was the reason behind the problems with his voice. However, recently, the sportscaster has come clean and revealed that it was actually due to hair plug addiction! Buck opened up about his struggle with losing his hair in his memoir, Lucky Bastard: My Life, My Dad, and the Things I’m Not Allowed to Say on TV. With that being said, let us get to know Joe Buck a little better.


He was born as Joseph Francis “Joe” Buck on April 25, 1969 in St. Petersburg, Florida. He grew up in the St. Louis area, where his father, Jack Buck (who was also a very famous American sportscaster), was renowned for announcing Major League Baseball games for the St. Louis Cardinals.

Joe Buck went to St. Louis Country Day School, and like his father, he was always passionate about broadcasting. His broadcasting career took off in 1989, while he was still pursuing his studies at Indiana University in Bloomington. He dropped out of college and did not graduate.

Joe Buck got married to Ann Archambault in 1993 and had two children together, however they got divorced after 18 years. Their divorce was finalized in 2011. On April 12, 2014, Buck married NFL Network reporter (and former Bronco cheerleader), Michelle Beisner. Beisner is a feature reporter for ESPN. Additionally, she will also be a member of the Sunday NFL Countdown Crew.

The 47-year-old’s net worth is estimated at $15.0 million! His annual salary is estimated to be around $6.0 million per year. His massive net worth is due to years of working as a reporter for reputed channels and networks such as KNOX, KMOV, and ESPN Radio. In 1994, his career really took off when FOX hired him on.

When FOX hired him, he was only 25 years-old at the time—making him the youngest male announcer in the history of football broadcasting. Since then, he has been the broadcaster for every major NFL show on television. Apart from that, he has made several appearances on many talk shows, including Late Night with Conan O’Brien. He has also starred in several commercials such as National Car Rental, Holiday Inn, and Budweiser.

In 2011, Joe Buck was diagnosed with a virus on his left vocal cord, which reduced his ability to speak. However, despite this condition, he still continued to broadcast for the 2011 NFL games. After receiving an operation for this condition, he continued as the lead announcer for many games.

In 2011, he told viewers that due to a virus in his vocal cord, he could not speak. But, the real reason behind this was the continuous transplantation of hair plugs. In his upcoming memoir, Lucky Bastard: My Life, My Dad, and the Things I’m Not Allowed to Say on TV, Buck revealed that due to hair replacement procedures, he was on the verge of losing his voice and his career. He also said that for almost two decades, he was addicted to hair plugs. His book is all set to hit stores in November, so be sure to pick up a copy!