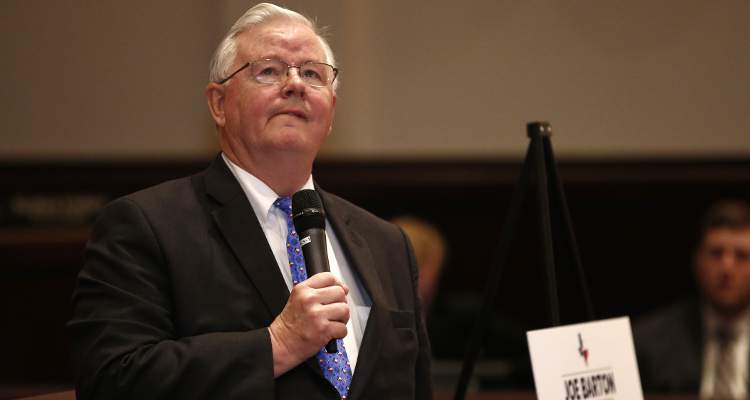 Rep. Joe Barton’s photos surfaced online this week, shocking many of his supporters. The sexually explicit photos have got Barton’s critics hot on his heels questioning the future of his career. Read all about this recent scandal in our Joe Barton wiki.

Initially, Barton worked in the private sector. His political career began in 1981, when he became a White House Fellow and worked under then-U.S. Secretary of Energy, James B. Edwards. He briefly worked as a consultant for Atlantic Richfield Company before he ran for Congress in 1984.

Brown was elected to Congress and has won every re-election from 1988 to 2010. Despite a lot of contention against long-time incumbents like Barton, he won his 17th consecutive term in the House.

Had the pleasure of meeting Dr. Angela Yen Moore from Arlington, TX. She was in Washington D.C. for the American Academy of Dermatology Association. It's always great to have visitors from the #TX06!

The Republican’s long tenure wasn’t without controversy. The majority of his decisions and stands have been highly contentious. A better part of his House career was in the House Energy and Commerce Committee and was chairman from 2004 to 2007.

Under Barton’s leadership, the government has set energy efficiency standards for light bulbs, advocated the switch from analog to digital TV, and supported the broadcast of airwaves to private companies. He is a proponent for deregulating the electricity and natural gas industries.

Barton is skeptical that global warming is caused by man-made emissions and advocates the use of fossil fuels. He even tried to block the Combating Autism Act of 2006, inviting flak that he let the bill die to serve the interests the oil and gas companies that donate heavily to his campaign. During the infamous 2010 Deepwater Horizon oil spill in the Gulf of Mexico, Barton called the oil giant, BP’s $20.0 billion agreement to compensate the victims a shakedown by the Obama administration. He apologized to BP’s CEO, Tony Hayward, when he appeared before Congress and was heavily criticized, even by the Republicans. He later apologized for his comments and said he was misconstrued.

Working together down at committee to strengthen Medicare. Medicare is a lifeline for our nation's seniors.

On June 14, Barton and his sons were at a Virginia ballpark practicing for the Congressional Baseball Game for Charity, which consisted of senators and reps, and Barton as manager. While practice was underway, a gunman opened fire injuring four people, including House Majority Whip, Steve Scalise.

Barton had been playing for the Republican side in the Congressional Baseball Game from 1988 to 1993. When age caught up with him, he became the team manager. At the practice, Barton’s eldest son, 47-year-old Bradley Barton, and youngest boy, 10-year-old Jack Barton, were also present.

Bradley Barton was in the batting cage and had taken cover during the shooting. Meanwhile, Barton tried to protect his other son during the incident. Calling his son brave, Barton said that his youngest took cover under an SUV.

“I got Jack, he crawled under a car with the bleachers between him and the shooter,” said Barton.

Joe Barton is married but has been divorced twice. He has four children with his ex-wives, Terri Barton and Janet Sue Winslow.

It was a night we will never forget. What a great picture of my son, Jack, and Ivanka. Thank you to everyone who helped make the game so memorable.

Shortly after Barton announced his bid for an 18th term in the Congress, an anonymous Twitter account posted nude selfies of the House Rep! The explicit images put his re-election bid in trouble, as he confirmed on Wednesday (November 22) that the photos were of him.

In a statement apologizing to his constituents, Barton said, “While separated from my second wife, prior to the divorce, I had sexual relationships with other mature adult women. Each was consensual. Those relationships have ended. I am sorry I did not use better judgment during those days. I am sorry that I let my constituents down.”

The woman alleged that Barton threatened to report her to Capitol police if she went public with details of his sex life. She provided a secretly recorded phone conversation of Barton warning her against using the explicit material “in a way that would negatively affect my career.”

Their relationship began when she posted a message on his Facebook in 2011. From then on, they began sexting, which progressed to physical, sexual encounters in Washington and Texas. Over time, she learned that Barton had affairs with multiple women at the same time.