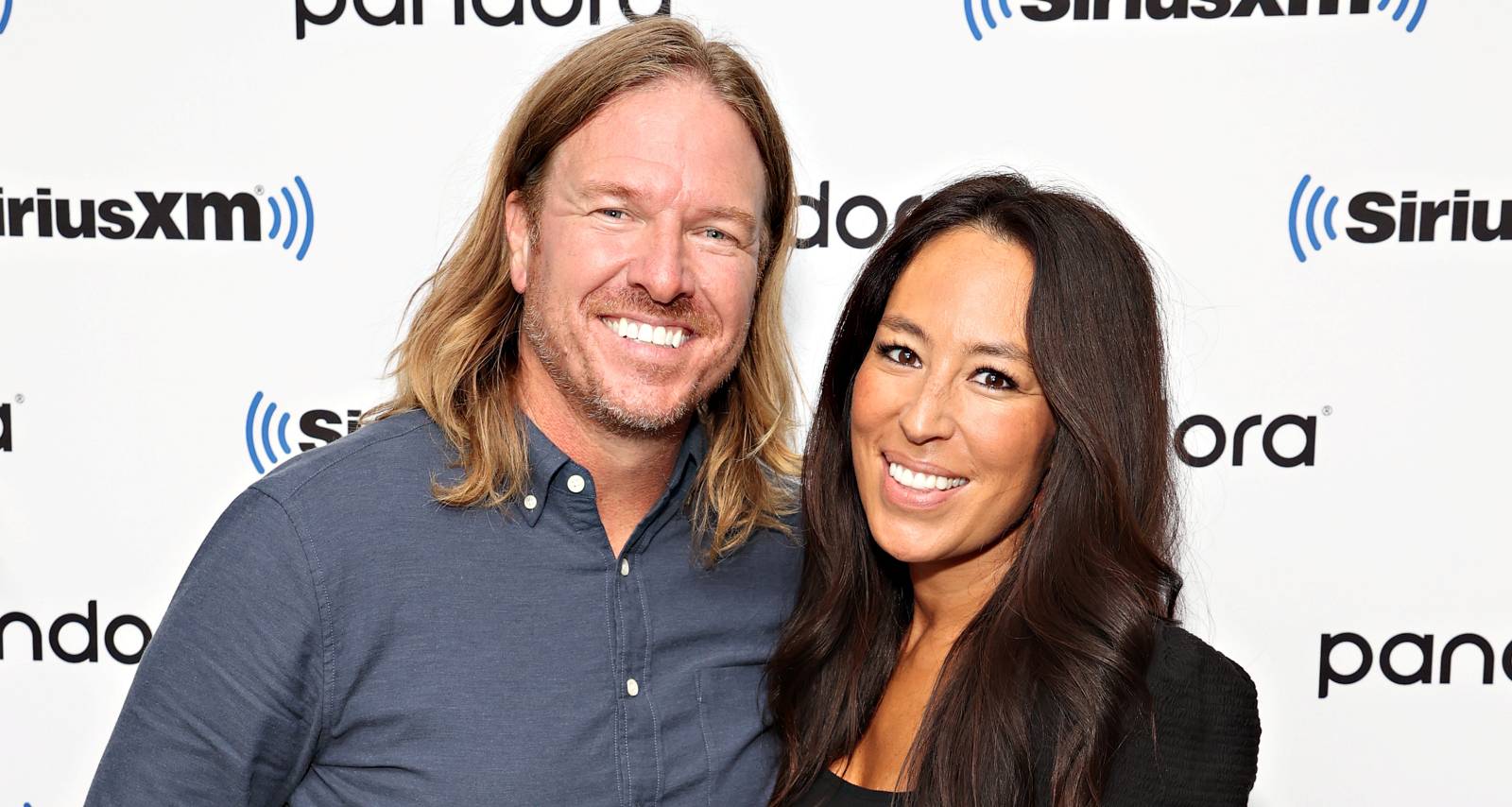 Joanna and Chip Gaines have been together for over 15 years. In that time, they’ve managed to build a burgeoning real estate and lifestyle brand, raise a charming family, amass a sizeable net worth, and create their own dream home. As one half of the power couple, Joanna can certainly hold her own. Having penned a few books, cookbooks, and journals, she’s certainly deserving of a tribute to her incredible journey of growth.

Learn everything you need to know about the home renovation guru and what the future holds for the Gaines family in our Joanna Gaines wiki.

Joanna was born on April 19, 1978. Despite being born in Kansas, she considers herself to be a true-blue Texan.

Joanna comes from Korean and German-Lebanese backgrounds from her mother and father’s sides, respectively. She has two sisters, one younger and one older than her. Their names are Theresa Criswell and Mary Kay McCall.

Joanna shares five kids with her husband, Chip. On June 24, 2018, the couple celebrated the birth of their fifth child, Crew. The names of their other kids are Drew, Ella Rose, Emmie Kay, and Duke.

Although she doesn’t come from a traditionally large family herself, Joanna said that she and Chip are open to having more kids.

“I joke with my friends that I’m going to be that 45-year-old who’s pregnant,” she said in an interview with People. “Chip is such a kid at heart and we both love a big family. I’m open to whatever. I’m just having fun with it.”

Being the middle child growing up, Joanna has managed to maintain a super-close relationship with both of her sisters. Evidently, they also enjoy having large families. The youngest of the trio, Mary Kay, is a mom of six children!

Joanna and Chip love spending time with their kids to the extent that they often appeared on their reality show, Fixer Upper in which the couple would renovate old properties to make them like new again.

Chip and Joanna married on May 31, 2003. They met each other after their graduations from Baylor University in Waco, Texas.

The couple’s first project after their marriage was a home they bought and renovated. They had a knack for renovations, construction, design, and flipping from the beginning. And their skills only improved every time they worked on a project together.

Joanna Gaines Started Her Company in 2003

In 2003, Joanna launched a small home accessories store, which eventually blossomed into the massive real estate and home renovation empire that it is today. Being the supportive and understanding husband that everyone has come to know and love, Chip played a major role in helping his wife achieve her goals simply by being there for her and working alongside her.

She learned everything she knows about the industry on the job and has been sharpening her skills ever since she started her company.

The couple then expanded their family, which is when the store took a back seat. But it gave way to a construction business called Magnolia Homes.

The company, which is located in Waco, Texas, is a one-stop shop for all of your home improvement needs.

The Magnolia brand has become a huge entity in and of itself, with Joanna’s Magnolia Seed & Supply store, the Silos Baking Co., and the Magnolia Market, all rolled into one money-making machine!

They also have Magnolia House, where one can stay and enjoy their facilities at the Hillcrest Estate.

The couple has certainly turned things around for themselves since the start of their dream to one day become successful realtors—and home reno masters!

Joanna and Chip Gaines Were on HGTV for 5 Years

In 2012, Chip and Joanna Gaines began their TV journey with the show, Fixer Upper. The reality show was all about renovations and home design, and how the couple helped people find the perfect homes that just needed a little tender love and care.

The objective of the show was to renovate the homes or “fixer uppers” to turn them into their clients’ dream homes. And Chip and Joanna delivered on that promise every time!

One of the most memorable episodes of the hit reality show was when Joanna and Chip renovated a new home purchased by Mary Kay and her husband!

The show began airing in 2013, and the last episode was wrapped up in April 2018. Joanna took to Instagram to share her thoughts on this amazing accomplishment, by posting a comparison photo of the day they started shooting and the day of their last shoot.

A part of the caption for the photo read: “What a journey this has been! Check out my blog to read an update from us and to see what’s on the horizon for our family and Magnolia as we move forward.”

I can't believe tonight marks our very last episode of Fixer Upper. This picture is of us filming our pilot in 2012 and then our last scene of fixer in 2017. What a journey this has been! Check out my blog to read an update from us and to see what's on the horizon for our family and Magnolia as we move forward. The end is bittersweet, but we are excited for what's to come. Tune in tonight for the series finale on HGTV @ 9/8c! #fixerupper (link in profile)

The beautiful family of seven has now moved on from the show and are back to focusing on their growing family.

For the people who make dream homes come true for others, their own has to be a magnificent one! And it is.

The Victorian-style 1,700-square-foot home in Crawford, Texas has got to be one of the most beautiful homes in the area.

The property is a rustic 1895 farmhouse, which was given a Cinderella makeover that took over a year’s worth of planning and execution!

The couple made sure they kept the country vibe of the place but expanded it to suit the more modern needs of their family. What was a two-bedroom home is now a space that can house seven people!

The Gaineses went with an open-floor plan with large living spaces and lots of ventilation. Reclaimed wood and upcycled materials were used to make the home look more rustic and true to its roots, all the while keeping in mind that it was going to be a home for people from the 21st century.

A lot of greenery can be seen outside and inside the home, and the farm consists of many animals, too.

The Gaines children learned to pick eggs and tend to the horses, cows, and several such farm animals, giving them an opportunity to stay rooted.

With Chip’s eye for detail and Joanna’s style sense, the Gaines home is a good inspiration to many who start a project of their own!

In November 2018, Joanna gave a rare televised tour of the beloved farmhouse home she shares with Chip and their children. Check out the video, here:

She Has Authored Several Books

With experience comes the urge to share! And Joanna hasn’t shied away from her entrepreneurial spirit!

Joanna Gaines is the author of Magnolia Table, The Magnolia Story, and Home Body. The books are all parts of Joanna herself, as she has expressed everything about the exciting journey she has had so far.

To add to the brand name, she launched a quarterly magazine called The Magnolia Journal.

Magnolia Table, however, is a cookbook full of recipes that are waiting to be tried! Did you know that Joanna Gaines is also a baker?

She makes donuts and cakes for the family-run bakery named Silos Baking Co., too!

Chip and Joanna Gaines’ Net Worth

Joanna and Chip Gaines are worth an estimated $9.0 million each. She has reportedly been receiving $30,000 per episode while on HGTV.

Her books have also done well, with Time.com reporting that she has sold 121,000 copies of her book, The Magnolia Story.

By renting out their luxurious Hillcrest Estate for a minimum of two nights (at $600.00 per night), we’re sure the Gaines family has nothing to worry about when it comes to the greens!

She Believes in Giving Back

The family started the Magnolia Foundation because Joanna fully believes in giving back to the community. It works towards uplifting orphans by collaborating with local charitable organizations. They also help in orphan care and youth development.

The foundation also believes that everybody is entitled to good living spaces and homes. So, it often helps with community restorations and family housing.

Chip and Joanna work with local children’s hospitals and volunteers who can help make the community a better place to live in.

The foundation is open to donations and promises to help all in need. It has reached Uganda, too, where the Magnolia Foundation and Restoration Gateway come together to uplift the orphans and give them a better life.

A New DIY Channel Is on Its Way!

That’s right! Chip and Joanna haven’t permanently left our TV screens just yet! Recently, the power couple announced that they’re planning on launching their own DIY channel in the summer of 2020.

Currently, all of the details (like coming up with a name for the channel) are still being worked out. What we know so far is that the network will be in association with the couple’s existing and constantly expanding Magnolia lifestyle brand.

It will feature long-form programming that focuses on community, gardening, wellness, food, design, and so much more! The network will also feature the entire library of Fixer Upper episodes for viewers to enjoy over and over again.

To top things off, the couple is also planning on launching a brand-new series on the network, which they’ll also be producing and hosting! The nature of the program has yet to be revealed, but we’re sure it’ll make for some awesome family-friendly viewing!

With five kids in tow, not to mention all of the existing business ventures the Gaineses are working on, there’s no doubt that the whole family will be happy to participate in this new development.

“Even our kids are excited,” said Joanna. “They’ll say to us, ‘You guys should try this or try that’. They’ve really been helping us with market research.”

Tebow even wrote a touching tribute to his chosen TV personalities: “Joanna and Chip Gaines are two incredible people with incredible hearts. Through remarkably hard work, Jo and Chip have created a platform to be able to impact lives with extreme generosity.”

Tebow appeared alongside the couple in an episode of Fixer Upper where they constructed a wheelchair accessible home for the Copp family, who have two young sons with rare congenital conditions that prevent them from being able to walk.

Through the Gaines’ Magnolia Foundation, viewers of the show donated money to help pay off the Copp family’s mortgage in full. If that doesn’t prove that the Gaines are worthy of their most influential people nomination, we don’t know what does!