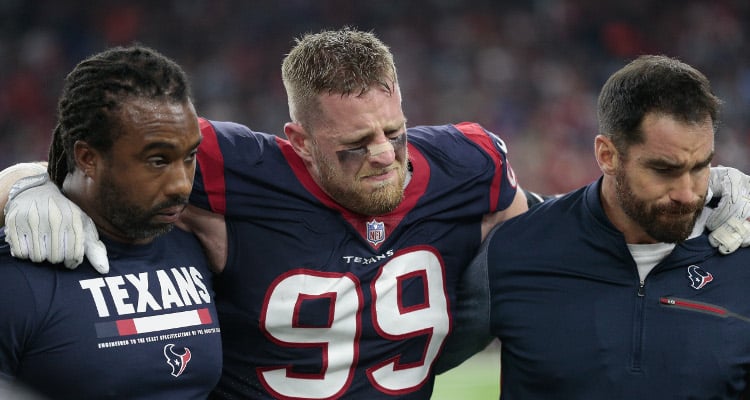 Houston Texans’ J.J. Watt suffered a setback during Sunday night’s game against Kansas City Chiefs. The defensive end player had to leave the game due to an injury. Here’s an update on J.J. Watt’s injury.

Sunday (October 8) night was not great for the Houston Texans. Not only did the team lose to the Kansas City Chiefs but also two of their players are ruled out for the rest of the 2017 season because of serious injuries. While outside linebacker, Whitney Mercilus suffered a chest injury, defensive end J.J. Watt had to leave the game in the first quarter due to an apparent leg injury. J.J. Watt’s injury video has become a hot topic among football fans. Find out about J.J. Watt’s injury status and his history of injuries that have plagued him recently.

What Happened to J.J. Watt?

The opening drive of the Texans vs. Chiefs game on Sunday night went badly for J.J. Watt. The 28-year-old fell to the ground clutching his leg while engaged in a block during the play’s first quarter. According to some reports, he was rushing a passer when his left leg buckled under him.

While he was helped by Texans training staff, he grimaced in obvious pain and was unable to put his weight on his left leg. While he was groaning on the ground, the staff first checked him for any possible ACL or MCL ligament injuries. He was taken to the locker room on a cart and examined further in the sideline tent.

Watt was last spotted exiting the X-ray room on crutches before boarding an ambulance leaving the NRG Stadium in Houston. His girlfriend, soccer star Kealia Ohai was in the ambulance with him. Incidentally, Ohai would also be missing the rest of the 2017 soccer season due to a knee injury.

The Texans posted an update on his injury on Twitter revealing that the three-time NFL Defensive Player of the Year suffered a tibial plateau fracture to his left leg. In simpler terms, it’s a break in the shinbone that affects the knee joint, stability, and motion. According to some medical sources online, this kind of injury requires several months to heal. It’s a no-brainer that Watt is ruled out for the rest of the season.

A Chronic History of Injuries

This season-ending injury might come as a big blow to Watt who had just made a comeback from another injury. He missed most of the 2016 season because of a severe back injury. He underwent surgery for a herniated disc and was placed on the injured reserve list.

He battled through multiple injuries in his hand and groin in the 2015 season and won his third Defensive Player of the Year title. He suffered torn muscles in his torso, groin, and upper legs which required surgical repair.

Heartbroken For You Brother. #InjuriesSuck @JJWatt

After a full recovery, Watt made a comeback in the 2017 season. He played in the first regular season game since his back surgery in the 2017 season-opener against the Jacksonville Jaguars. In four games, Watt recorded 13 tackles and no sacks. Sadly, the 2017 season ends here for Watt.

His two younger brothers showed their brotherly love and support via Twitter. While the youngest Watt, Pittsburgh Steelers’ linebacker T.J. Watt summed it up in a single line, Derek is confident his brother will come back from this fighting.

Still can't believe it…sick to my stomach watching on our flight home. I know you'll come back from this. Love you bro! @JJWatt #Family

In addition to the Watt brothers, Texans fans were quick to react on Twitter after one of the top players of the team was reported to be ruled out for the rest of the season. Surely, fans would want to take a look at J.J. Watt’s injury video to see the way he injured himself. You can check out the video below.