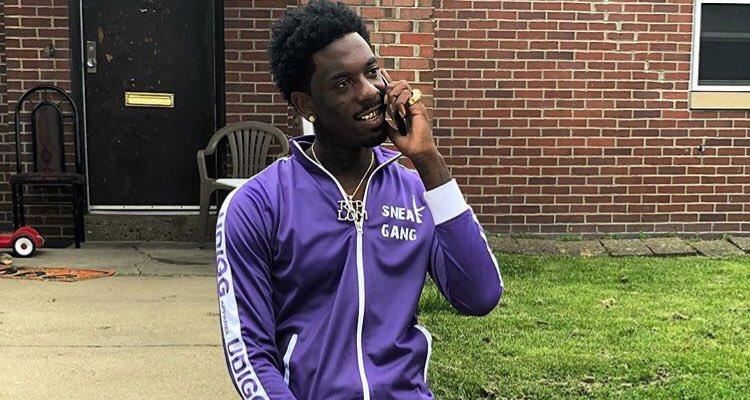 The world of hip-hop is mourning the loss of two rising talents. XXXTentacion and Jimmy Wopo died in two separate shooting incidents on June 18. Jimmy Wopo, whose real name was Travon Smart, was touted as hip-hop’s next big thing to come out of Pittsburgh.

Emerging rapper Jimmy Wopo from Pittsburgh, Pennsylvania was killed in a double shooting on Monday (June 18). He was 21 years old at the time of his death.

Wopo was projected to be another Pittsburgh-bred hip-hop star like Wiz Khalifa and Mac Miller. We celebrate the emerging rap mogul gone too soon with details from Jimmy Wopo’s wiki.


Jimmy Wopo was born Travon Smart in Pittsburgh’s Hill District. Growing up, his influences were 50 Cent, The Game, Chief Keef, and Meek Mills, as well as other artists in Pittsburgh’s local music scene.

Wopo went to different schools in his childhood. He particularly disliked school for making him endure extra hours of study. He got kicked out of one school before dropping out in the tenth grade!

He admired his mom for not sheltering him and never holding him back from anything. He believed she raised him to be prepared for the real world.

Wopo had been making music since the age of 14. One of his first stages was rapping at the Bedford Hope Center, a local church. It was frustrating for the young rapper who had to omit expletives in his lyrics while performing there.

But he got his first big platform on a local radio show where they let its audience rap.

Wopo began considering a career in music when he was 18. He got a manager, Taylor Maglin, who works with Wiz Khalifa’s Taylor Gang imprint. With Maglin’s help, Jimmy Wopo’s Woponese was released. 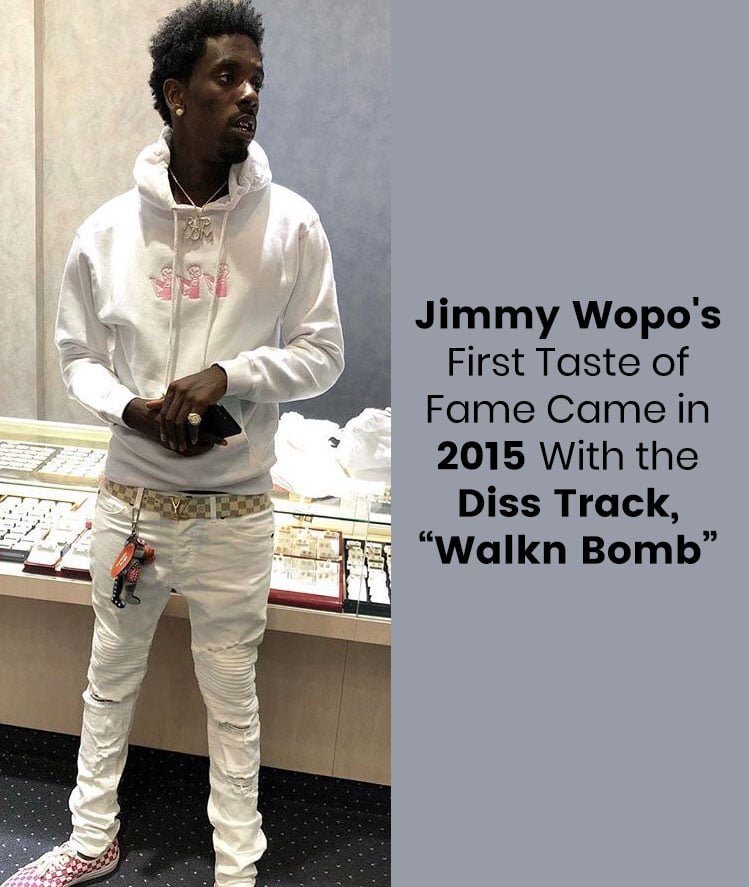 His first taste of fame came in 2015 with the diss track, “Walkn Bomb.” Jimmy Wopo’s “Elm Street” became his breakout track in 2016, and he was touted to be the next Wiz Khalifa. The song got him named in Complex’s “Bout To Blow” list.

Encouraged by the growing popularity of his music, he began dropping more new tracks. Wopo believed in consistently releasing new music and attracted many listeners to his art. He then joined the YouTube Millionaire’s Club when his videos began surpassing over a million views.

He was overwhelmed and motivated by his own rising success and said, “I started to do little shows for $200 and verses for $150 when I was younger. It was my little hustle and I thought I could get into this instead of [being in the streets].”

Wopo performed at small local venues, which were always sold out. Nonetheless, he was proud to put on a show for those who supported his brand of music.

He collaborated with major artists like 21 Savage and Sonny Digital. But he found the most success with Hardo and their mixtape, Trapnese.

A former football player and a huge sports fan, Wopo’s lyrics contain sports references. He was also a supporter of Pittsburgh sports teams, especially the Steelers. 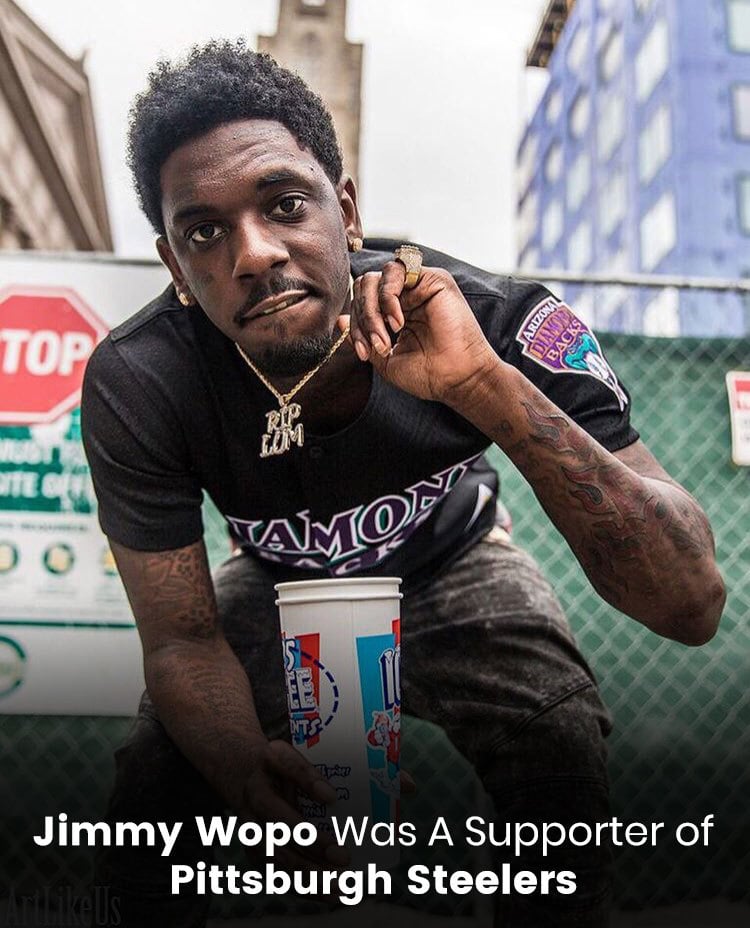 By the age of 21, Wopo had more run-ins with the law than he probably would’ve liked. He got into trouble as a student before he dropped out of the court-adjudicated school he was sent to. After that, he got into more trouble on the streets.

Wopo was convicted twice on drug charges and survived multiple shootings in the past. In more than one interview, he had expressed his frustration over all the probation terms he had to stick to. He did, however, get booked in jail for a probation violation in 2017.

When he was shot during the time he was producing “Elm Street,” he had the growing urge to turn his life around. And music was the only way.

“When I got out of county [jail], I got home and was at the crib, and I was just like, I gotta focus on my music more. I decided this was the only thing good coming, I’m gonna stick with it,” Wopo recalled.

He dreamed of making it big in music achieving his dreams. He resided in the projects in Arlington and hoped to own a better home one day.

But his biggest aspiration was to put his criminal life behind and earn enough money to give back to the community. He had been working on this goal in his lifetime.

The rapper coached Little League in his town and even organized an Easter Egg Hunt for his neighborhood kids. He also worked hard to look out for his little brother.

It wasn’t just getting jailed and shot that encouraged Wopo to turn his life around. The young artist became a father at the same time he found mainstream success. The birth of his daughter made him want to be the best dad for his little girl.

Wopo’s princess, Aubrey, turned two years old in 2017, and he couldn’t stop gushing about her. “My first daughter. She be having fun and s**t, she a crybaby though, but she be having fun. I’m always happy when I see her. I always smile and laugh and clown.”

When Aubrey was born, Wopo had to balance completing his parole stipulations with caring for her. He credited her with the strong desire to change his life and got serious about making his career work.

Jimmy Wopo Was Killed in an Apparent Drive-By Shooting

According to reports, Wopo and another unidentified person were riding in a white Mazda SUV on Monday in the Hill District when they were shot at in an apparent drive-by shooting. The rapper and the other victim were rushed to the local hospital.

Initial reports said that one of the victims of the double shooting passed away. The other person was in stable condition.

Wopo’s manager, Maglin, later confirmed in a heartbreaking Facebook post that it was the young rapper who passed away. He is survived by his daughter, Aubrey.

Authorities believe this was an isolated shooting incident that does not pose a threat to public safety as of now. One of the witnesses the police interviewed said Wopo’s vehicle was being followed. The second vehicle pulled alongside the Mazda before someone fired two shots.

His fans have poured out their grief on social media. Fellow Pittsburgh offshoots, Wiz Khalifa and Mac Miller, were among the artists who paid tribute to Jimmy Wopo.