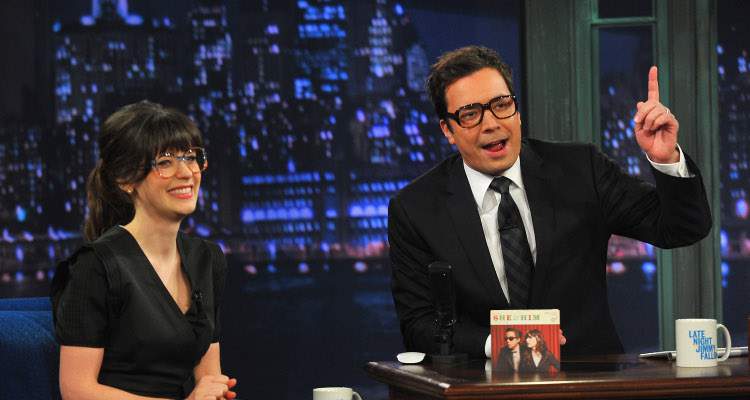 The Super Bowl LII was one heck of a ride! Although Patriots fans went home disappointed, everybody at the stadium certainly enjoyed the halftime show. However, Jimmy Fallon’s Super Bowl 2018 blink-and-you’ll-miss-it appearance has now sparked a rumor. Twitter was abuzz with wondering if Zooey Deschanel and Jimmy Fallon were together last night.

The Tonight Show host had a great appearance during the Super Bowl 2018 halftime show. But that seems to have taken a back seat as the focus turned to his dating life. Now, it might just be wild speculation, but fans are still abuzz about it.

Find out if Jimmy Fallon and Zooey Deschanel are dating!

What Sparked the Dating Rumors?

In a bizarre twist of events, fans are now wondering if they saw New Girl star Zooey Deschanel “all over” Jimmy Fallon at the Super Bowl 2018. The jumbotron seems to have caught Fallon in an awkward moment with someone who looks like her!

The two looked like they were straightening themselves up when the camera caught them. Fallon and Deschanel played boyfriend-girlfriend in their video, “Idiot Boyfriend,” and are reportedly good friends, too.

Fans of the stars are going crazy on Twitter with the rumor that the two might be together. While some are happy about the “news,” others still seem to be in a daze about what actually went down at the Super Bowl.

Here’s the clip that created a ruckus on social media:

Wait, but what were they doing? @jimmyfallon I am confusion!!!! #SuperBowl pic.twitter.com/VLu6PVprWE

While most fans are convinced they saw the duo together at the Super Bowl 2018, we are not so sure about them being an item. Also, there is speculation that the woman beside Fallon was not Deschanel.

Zooey Deschanel gave birth to her second child in May 2017, with husband Jacob Pechenik. The couple welcomed a baby boy, Charlie Wolf Pechenik, after dating for about two years. They tied the knot in June 2015, and Deschanel welcomed her first-born, Elsie Otter Pechenik, in July that year.

Jimmy Fallon is also happily married to Nancy Juvonen and has two children with her named Winnie and Frances Fallon. Juvonen is older than Fallon by seven years and owns a production company with Drew Barrymore.

The couple got married in 2007 and are still going strong after 10 years. The award-winning host often mentions his family on his show and talks about how much he loves them.

Since neither Fallon nor Deschanel mentioned splitting from their respective spouses or commented on the rumor, it could soon pass.

Check out some of the tweets that made the news go viral on social media:

Anyone else catch @ZooeyDeschanel all over @jimmyfallon then hurried to back away after they realized they were on camera? Like what!?!? ?? #SuperBowl2018 #SuperBowlLll

why did zooey deschanel and jimmy fallon look so suspicious

Do You Think She Was Really Zooey Deschanel?

It's okay @jimmyfallon we'll get you a sippy cup ? #SuperBowl #Jumbotron @FallonTonight pic.twitter.com/t0MioIkb65