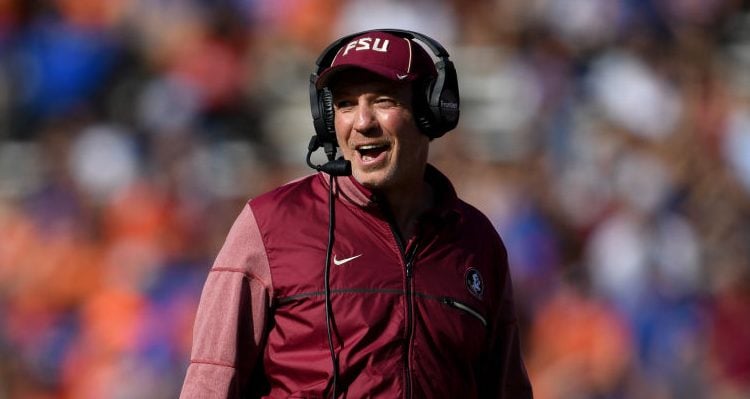 All seemed well with Florida State University’s football setup until the shocking news of head coach Jimbo Fisher made headlines. So, what happened to Jimbo Fisher? And, why did Jimbo Fisher leave FSU? Keep reading to get all the answers right here.

Jimbo Fisher is leaving his job as the head coach of the Florida State University football team for several reasons, including getting the largest deal in college football coaching history. Fisher has signed on as the new head coach with the Texas A&M University team after reportedly getting a 10-year, $75.0 million contract to bring the team back to the top. It also seems that Fisher wanted a change of scene after having been at FSU for so long. Now, the college football circuit is watching if Fisher can weave his magic at Texas A&M as well.

Fisher is an American college football coach and former player who was the coach for the FSU team since 2010 until near the end of the 2017 season. He is now taking up the job of head coach at Texas A&M University, according to sources. He resigned on Friday, December 1, 2017, to accept his new job, and the news has spread fast on the college football circuit.

We’re going to tell everything we know about why Jimbo Fisher left FSU.

According to sources, Jimbo Fisher’s Texas A&M 10-year contract is worth $75.0 million. It is a fully guaranteed contract for Fisher, and it’s the richest deal in college football history strictly regarding total value. In real terms, Fisher will be receiving $20,548 a day for the next 10 years.

One team. One heartbeat.

Reportedly, Fisher made it clear it was time for a change by putting his Christmas tree outside his house to be picked up like garbage. Fisher’s new contract still needs to be approved by the Texas A&M Board of Regents. But he won’t be coaching FSU in their next game with Louisiana Monroe.

Fisher had an expensive contract with FSU as well. Despite this, Texas A&M was aggressive and went all out financially to get Fisher to sign up as their next head coach.

A Great Run So Far

Fisher had a great run when he was the head coach at FSU, which included winning the national championship in 2013 and three ACC Championships. Fisher made a bowl game every year in his FSU tenure and guided the team admirably during his time.

However, the 2017 season hasn’t been very good for FSU, and many people believe that Fisher bears the ultimate responsibility for that. A star player like quarterback Deondre Francois was lost early in the season, and they had to start with freshman James Blackman instead. Fisher’s outlook didn’t have any depth to withstand Francois’ loss.

Even though FSU hadn’t been a contender for the title in the past few years, there was never any job insecurity for Fisher. He was working under a contract that was paying him an incredible $5.5 million a year until the 2024 season.

The biggest reason Fisher left Florida State is that the new offer was too good to refuse. Another reason could be that Fisher had been the head coach for FSU for so long and he wanted a change of scene.

People are also pointing out to the fact that Fisher is better as a change agent than a maintainer. So, there is very good chance that he may be able to turn things around for Texas A&M the same way he initially did at FSU.

Fisher also believes himself to be a change agent, so maybe he will see this new position as a challenge. He is now going to be the head coach of Texas A&M, where he can try out new ideas and use his coaching skills to turn things around for the team.

It sure looks like it’s going to be an exciting time for Jimbo Fisher and Texas A&M.