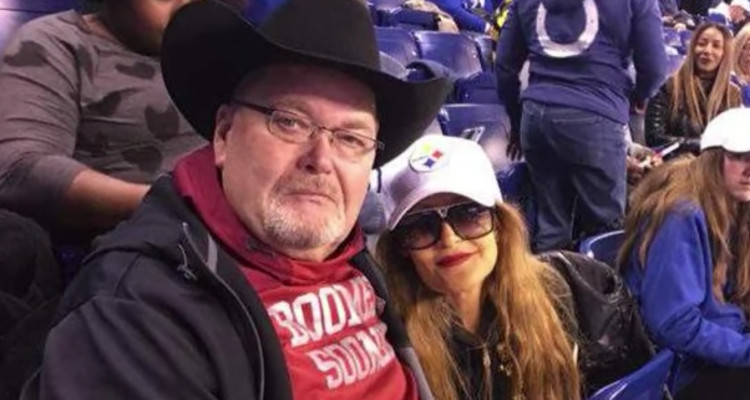 Jan Ross, the wife of the legendary WWE commentator and referee, Jim Ross, has passed away at the age of 55. She suffered fatal injuries to the brain following a catastrophic Vespa accident.

It is a sad day for the world of wrestling entertainment. The famous WWE referee and commentator, Jim Ross’ wife died on Wednesday (March 22) after being involved in a horrific vehicle accident on Monday night. She suffered severe head injuries, including multiple skull fractures after being hit by a car while riding her Vespa on the way home from the gym. Condolence messages poured in on social media as famous wrestlers and WWE personalities mourned the loss of their friend and colleagues’ beloved wife. Jan Ross’ cause of death has been ruled as accidental, due to the fatal brain injuries that couldn’t be prevented despite surgery. Here is everything you need to know about Jan Ross’ wiki including her age, net worth, pics, and last rites.

Jan Ross’ Cause of Death: How Did Jan Ross Die?

On Wednesday night, Jim Ross took to Twitter to share the devastating news of his loving wife, Jan Ross’ untimely death. Apparently, her Vespa was struck by a 2000 Mercury Grand Marquis, while she was returning home from the gym in Oklahoma. Following Monday night’s catastrophic accident, Ross was immediately rushed to hospital in critical condition with head injuries. Allegedly, both the car and the Vespa involved in the accident caught on fire. Unfortunately, Ross was not wearing a helmet, which perhaps could have stifled the extent of her injuries. Jan Ross’ age was 55 and she passed away after sustaining multiple skull fractures which proved to be fatal.

We'll never be able to thank everyone for all your prayers for my wife Jan who's still in critical condition in OU Medical Center. ??

An understandably heartbroken Jim Ross had earlier tweeted, “The swelling of Jan’s brain will subside soon as it must for her to survive,” and prayed for a miracle. Soon after, he informed his followers of Jan Ross’ death writing, “A Priest gave my wife Jan her last rites tonight. My little Angel is gone.”

On his web site, Ross blogged about the life-changing event and reminisced about happier days with his wife of 24 years. He wrote, “Jan and I started seeing each other in my WCW days and she remained steadfast at my side during my 21 year WWE run, of which she dearly loved and always felt like we were a member of a family there, no matter the various challenges that confronted us along the way including my three bouts with Bells palsy. She never wavered.”

I'd really appreciate you taking the time to visit iTunes and leave a comment & a 5 star rating for the Ross Report. It helps us! Thanks. #itunes #rossreport

Jan Ross’ wiki includes her romantic meet-cute of the first time she bumped into Jim for the first time on a plane. The beautiful Jan was working as a flight attendant, when the duo met on Jim’s travels with the WCW and got married in 1993. Jim blogged about the wonderful memories he shared with his wife and gushed about the goodness of her nature, writing, “She loved the talents and their spouses, invited them into our home, cooked for them and even did some of their laundry that they would bring over. Some of the Attitude Era’s biggest stars were made to feel welcome in our home over the years thanks to my wife.”

@JRsBBQ and his beautiful wife Jan at our wedding. May she Rest In Peace. pic.twitter.com/jXeEZwecAB

Many WWE celebrities such as Sasha Banks, Renee Young, Alexa Bliss, and Mickie James offered their condolences for the death of Jan Ross. Longtime friend, Ric Flair, who initially introduced Jim to his wife also mourned Jan Ross’ death. Revealing that she helped him battle depression and addictions, Jim wrote, “She helped me battle thru multiple bouts of depression as a result of the multiple, Bells palsy attacks, my dependence on Ambien, and nursed me to back health after serious, colon surgery that threatened my life and she never complained one time.”

Jan Ross’ net worth was $4 million thanks to Jim’s successful WWE career. Jan is survived by Jim, his two daughters from a previous marriage, as well as two granddaughters.