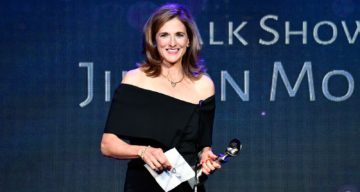 Jill Schlesinger breaks down the latest happenings in business and equips viewers with financial advice on CBS. The business news analyst and multimedia personality has saved many of her followers from making costly financial mistakes. Our Jill Schlesinger wiki takes you behind the woman helping you to be smart with your money.

Her Father Was a Financial Wiz

Jill Schlesinger was born on December 9, 1966 and is 52 years old. She and her sister, Kim, were raised in Scarsdale, New York by their parents, Albert E. Schlesinger and Susan Schlesinger.

Albert “Big Al” Schlesinger was the president of Lubin & Schlesinger, a New York-based investment firm. He spent his career as a trader, specialist, and board member of the American Stock Exchange. His wife of over five decades worked in real estate.

He was an expert who understood the investment environment of the time easily. After retiring from Wall Street, he turned to investing in small businesses before passing away in November 2013.

Jill says her father learned from his own financial setbacks. She credits him for all her financial knowledge, especially their discussions on occurrences in the business, financial, and investment worlds as well as on sports, politics, and entertainment. She turned to him for financial advice whenever she needed it.

She Was a Trader before Becoming an Investment Adviser

Schlesinger graduated from Brown University in 1987 with a Bachelor of Arts in International Relations and Affairs. Soon after, she plunged into the financial world, first working as an accounts executive in a Rhode Island radio station.

She later became a self-employed options trader on the Commodities Exchange of New York. The job was lucrative, earning her a significant amount of money in a month.

However, one day her dad visited her in her apartment and looked at her profit/loss statement. When he said she had a great month, her response wasn’t all that excited.

“And he said, ‘Honey, if you can’t get excited about making money that is about all there is to trading.’ And he was a trader himself and it was very good advice,” Jill recalled on a podcast.

The money she made as a trader gave her the financial stability to pursue what she truly felt passionate about. So Schlesinger became a Certified Financial Planner (CFP) and began helping people make smart financial decisions.

She was the co-owner and Chief Investment Officer of a regional investment advisory firm from 1995 to 2009.

She Has a Radio Show, Podcast, and Book

Schlesinger was working directly with people to help them make better investments. Eventually, she began expanding her expertise across different platforms.

As soon as she left her independent investment advisory firm, she joined CBS Interactive as Editor-at-Large. She was part of the team that launched MoneyWatch.com and was responsible for the market and investment content.

Since 2013, she has been a business news analyst at the network. She’s been a regular on CBS This Morning and other shows, breaking down the latest happenings in the financial world as well as analyzing the impact of the government’s economic policies.

Jill further expanded her reach to 95 markets across the country with her Better Off podcast and her radio show, Jill on Money. She writes a column of the same name for Tribune Media Services and is also a weekly guest on NPR’s Here and Now.

Her radio show won the 2018 Gracie Award for Best National Talk Show. She also has an Emmy nomination to her credit among a laundry list of awards.

And she’s now offering 13 tips to save people from losing money with her new book, The Dumb Things Smart People Do With Their Money: Thirteen Ways to Right Your Financial Wrongs, which was released on February 5, 2019.

Her Father Advised Her on Her Divorce

When Schlesinger was at Brown University, she met Ronald Steven Fuchs, a medical student at the Ivy League institution. They went on to marry in April 1991, but the marriage fell apart in a year.

While guesting on a podcast, Schlesinger revealed her now-ex was demanding a huge alimony payment from her. She was adamant about not paying Fuchs initially. However, Albert Schlesinger gave his daughter some advice that stayed with her all her life.

He said that she had worked hard on Wall Street and was rewarded well. “All this guy wants is for you to pay him off,” she said he told her, adding that he told her to pick a ridiculous number, make him feel like a “man” (note the Big Al sarcasm), and move on.

She adds that it was a blow to her pride and made her feel like it was a punishment for marrying the wrong person. However, Albert explained to her that it was not paying the man as much as it was paying for her freedom and gaining the ability to move on.

As she learned from him during that time, “there’s no price tag for that freedom.” Schlesinger now advises her clients that using the financial resources at your disposal to move on from something unpleasant is worth the money, even if it feels like an unfair transaction.

That advice helped both Schlesinger and Fuchs to move on. He remarried and has a medical practice in Pennsylvania. Schlesinger is also now happy with her girlfriend and their furbabies.

She’s in a Relationship with Jacqueline LiCalzi of Morgan Stanley

Jill Schlesinger is openly lesbian and is in a relationship with Jacqueline “Jackie” LiCalzi, the Managing Director and Global Head of Regulatory Relations at Morgan Stanley. Together, they are strong supporters of LGBTQ rights.

They fight for LGBTQ employees in financial services and LGBTQ-friendly businesses. Schlesinger even remembered an incident where she had to turn away a client who didn’t want to own stock in a company that helped gay couples.

They also donate to a variety of causes like the National Center for Lesbian Rights and the Peconic Land Trust to protect Long Island’s ecosystem.

Schlesinger and LiCalzi keep details about their relationship private. Nonetheless, they are often seen at events together. They reside in Manhattan and are furbaby parents to two Norwich Terriers, Trixie and Charlie.