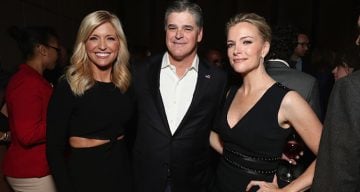 Apparently, Fox News has a few more skeletons in their closet than we realized! Fox News host, Sean Hannity, 54, being accused of sexual harassment is the latest scandal at the network, following the recent allegations and firing of former Fox host, Bill O’Reilly. With these recent harassment claims, many have been looking into Sean Hannity’s wife, Jill Rhodes. So, if you have been looking for information on her, then check out our Jill Rhodes wiki.

Is Sean Hannity married? The answer is yes, so we can only imagine how his wife might be feeling right now, after hearing that her husband is the latest Fox news anchor to be accused of sexual harassment. Rhodes’ age is unknown, but the couple have been married since 1993 and have two kids together: son Patrick, 18 and daughter Merri Kelly, 15. The family currently lives in New York City, where Rhodes used to work as a book editor in Manhattan.

How Did Sean Hannity and Jill Rhodes Meet?

According to People, Hannity met Rhodes in Alabama, where he was working an event for WVNN. Rhodes, a University of Alabama graduate in journalism, was working as a political columnist for the Huntsville Times. At the time, Hannity would “amuse” Rhodes with his “frequent voicemail messages” and it all came together when they connected at a mayoral debate he organized. She told People, “I looked at his face and I said, ‘That is the man I’m going to marry.’”

Hannity Dedicated His Book to Rhodes

In 2002, Hannity dedicated his book, Let Freedom Ring: Winning the War of Liberty over Liberalism, to his wife.

“The most important acknowledgement I make is to my family – my wife, Jill and my two children, Patrick and Kelly, to whom I dedicate this book. They are the ones who put up with the long work hours I needed to invest in this project. They are the ones who make it worth doing – and who make my life complete and happy on more levels than I can explain. I am blessed to have them in my life.”

The Sexual Harassment Allegations Between Debbie Schlussel and Sean Hannity

Since the news broke, many Fox News fans have been looking for pics of Sean Hannity and are scrolling through Twitter and Instagram to find other pieces to the story. In an interview with the Pat Campbell Show, the former Fox News contributor claimed that Hannity had invited her to his hotel room, twice, when they made an appearance together on one of his shows. Schlussel said she refused and as a result, was never asked to return to the show.

“I wasn’t booked on his show again, and he called me and yelled at me,” Schlussel said. “It was made clear to me that I didn’t go back to his hotel with him after. I got a very weird feeling about the whole thing, and I kind of knew I wouldn’t be back on his show.”

Schlussel added: “This kind of stuff is all over the place at Fox News and anything that has to do with Sean Hannity.”

Hannity has since denied Schluseel’s sexual harassment claims as well as Fox News. Hannity also released a statement to LawNewz, denying her claims.

“LET ME BE CLEAR THE COMMENTS ABOUT ME ON A RADIO SHOW THIS WEEK by this individual ARE 100% false and a complete fabrication.

This individual is a serial harasser who has been lying about me for well over a decade. The individual has a history of making provably false statements against me in an effort to slander, smear and besmirch my reputation.

The individual has not just slandered me over the years but many people who this individual disagrees with.

My patience with this individual is over. I have retained a team of some of the finest and toughest lawyers in the country who are now in the process of laying out the legal course of action we will be taking against this individual.

In this fiercely divided and vindictive political climate I will no longer allow slander and lies about me to go unchallenged, as I see a coordinated effort afoot to now silence those with conservative views. I will fight every single lie about me by all legal means available to me as an American.”