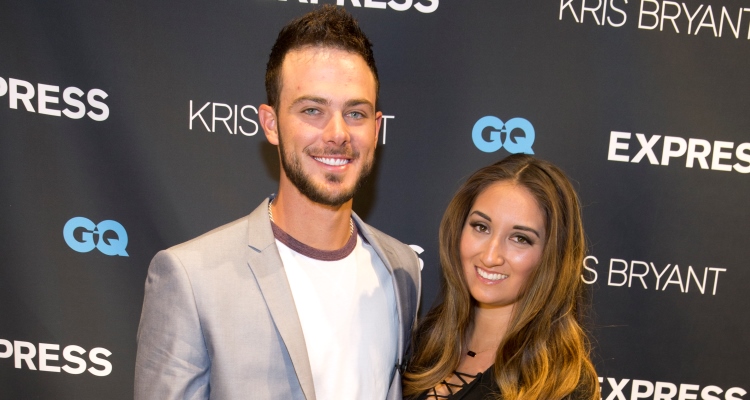 Jessica Delp is the childhood sweetheart-turned-wife of Kris Byrant, the Chicago Cubs’ third baseman. The story of Kris Bryant and Jessica Delp started 8 years ago, when the 16-year-old Bryant asked the future Mrs. Bryant out on a date. We’ve got all you need to know about Kris Bryant’s wife, Jessica Delp, right here.

Baseball fans know Kris Bryant as the guy who racked up 54 home runs in his college baseball days. But it’s with the Chicago Cubs that his star really came to be. As the youngest Cubs player to hit a long ball during a World Series game in over 80 years, and as the player to help the Cubs win their first championship in 108 years, he literally made history. To no one’s surprise, he became the National League MVP in 2016. Though Ms. Delp is often seen with him at the games wearing the Cubs jersey, little is known about her. We aim to set that straight with our Jessica Delp wiki.

As she was born on the 4th of March 1992, Jessica Delp age is 25. While not much is known about Jessica Delp’s parents, she grew up in Las Vegas with her older brother, Tomo. Sure, she is the wife of Chicago’s current hottest Baseball star, but she has her own claim to skills on the sports front. She played Basketball and softball at Bonanza High School, which incidentally is where she met Kris Bryant.  In fact, both of them did enough in school to make sure they made the school’s wall of honor, before they graduated out in 2010!

Bricks and Ivy with my ???lady!

We like it when a love stands up to any test. Jessica started dating Kris in their sophomore year in high school. Cuteness alert: They had to be dropped off on their dates by older siblings and friends, as they were too young to drive! The real test for the two lovebirds came when they were separated by 325 miles during their college years; Bryant went to study Business at the University of San Diego, while she took up psychology at UNLV (University of Nevada, Las Vegas).

Having disproved the long distance relationships don’t work theory, Delp graduated in 2104 and the two stayed strong as their love outlasted the miles between them. With college out of the way, she joined Bryant on the baseball-playing road as his biggest supporter and most ardent fan.

Ever since Kris Bryant got the call to the Cubs last season, the couple has been living in downtown Chicago, where her status rapidly progressed from girlfriend, to fiancé, to wife! Kris Bryant proposed to her on Christmas Eve 2015, and the couple got hitched on the 7th of January 2017, fittingly in Las Vegas, the place where it all began. Word has it that the amazing couple is so well liked, that all the wedding vendors went out of their way to make the wedding a memorable one. And going by the pics, we can believe it! Check out this little Instagram teaser Bryant posted on his account!

Following the wedding, Jessica Delp has settled wonderfully into the role of Mrs. Bryant. While her man’s in training, she keeps herself busy with the wives and girlfriends of other Cubs, and helping with several of Chicago’s charities like the Jason Motte Foundation, a group that raises money to help improve the lives of Chicago-based individuals who have been diagnosed with cancer.

Happy 25th Birthday to my beautiful wife! I'm so grateful for every day I get to spend with you!!

But, despite the stardom, the couple has done a great job staying normal in an abnormal scenario. Like any other normal newly-wed couple, they go to the zoo, cheer for their favorite teams (Phoenix Suns and Arizona Coyotes), go on hiking trips and yes, they’ve even made the trip to Disneyland …oh and dubsmash Disney songs from Frozen. But who doesn’t?

Little throwback with the future wifey!

Bryant is a participant at the Home Run Derby and is an All-Star, and Delp makes it a point to be with him at most of his sporting dos, so you can expect to see plenty of pics on her Twitter profile. While you’re there, check out the pics of the much talked about Jessica Delp wedding, and the fairy-tale romance that has followed. Unfortunately for you Instagram lovers, the Jessica Delp Instagram has no pics, and no posts yet. You can always check out his though!