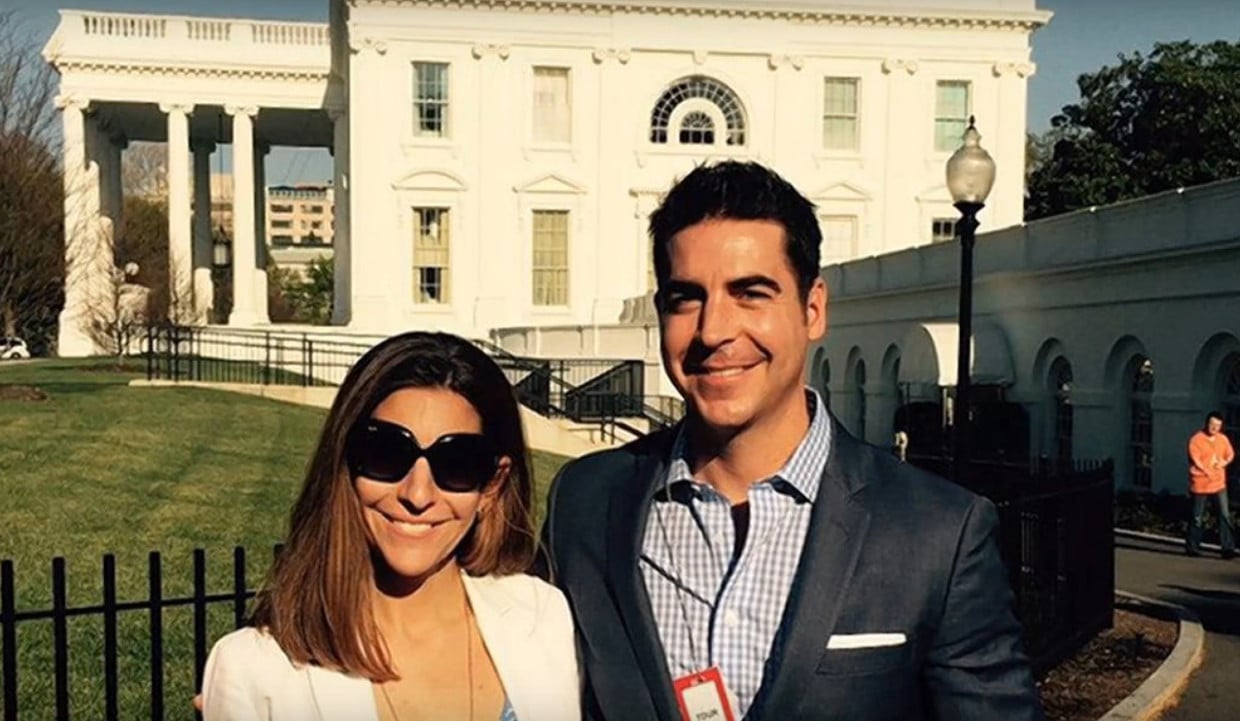 It’s been barely three days since dining with President Trump, and Jesse Watters is back in the news! The popular Fox News host is reportedly in a divorce battle with his wife, Noelle Watters, after cheating on her with his associate producer. Keep reading to find out more about Jesse Watters’ wife, right here.

Fox News is in the middle of yet another scandal. And this time, it’s rising star Jesse Watters who has grabbed headlines.

Jesse Watters is in the middle of heated divorce proceedings after his wife, Noelle Waters, filed for divorce in late 2017.

With the news of Jesse Watters’ affair, everyone is curious to know who the Fox News reporter’s now-estranged wife is.

We’ve got everything you need to know with details from Noelle Watters’ wiki.

Who Is Noelle Watters?

Noelle Watters (née Inguagiato) was also a Fox News employee when she met her husband, Jesse Watters. She worked in the advertising and promotions department at the network. Watters was also the host of a web show called iMag Style.

Jesse and Noelle Watters got married in 2009. After their twin daughters were born in 2011, Watters went on maternity leave but did not return to her job at Fox News.

Noelle Watters’ Instagram account is private. But if you head over to her Facebook page, you’ll see plenty of photos of Jesse and Noelle Watters’ kids.

Here’s a picture posted in October 2017 of the family in happier times.

Jesse Watters, age 39, is in the spotlight after the news of his affair with a colleague was made public in a New York Daily News report on Saturday (March 10). He reportedly cheated on his wife with 25-year-old Emma DiGiovine, an associate producer at Fox News.

The Fox News host is said to have informed his bosses at the network after his wife filed for divorce in October 2017. As a result, DiGiovine was transferred to another department but is still dating Jesse Watters, according to sources.

A Fox News spokesperson spoke about the incident with the newspaper and said, “Within 24 hours of Jesse Watters voluntarily reporting to the Chief of Human Resources in November 2017 that he was in a consensual relationship with a woman on his staff, management met with both parties and a decision was made for the woman to be transferred to work on another program on the network where she currently remains.”

In the Middle of Controversy, Again!

The news of Noelle Watters’ divorce proceedings against her husband come on the heels of plenty of controversy at Fox News.

Popular host Bill O’Reilly was fired from the network after it was revealed that he had settled several sexual harassment lawsuits. Meanwhile, another Fox News host, Eric Bolling, was also sacked after sexual harassment allegations were made against him.

Jesse Watters worked with both O’Reilly and Bolling and even replaced Bolling on The Five.

In his career with Fox News, Jesse Watters’ aggressive and brash attitude has earned him the wrath of some TV viewers.

One controversial incident involved Jesse Watters’ faux pas during his segment in New York City’s Chinatown. He angered many people and was labeled a racist when he went about the streets greeting residents with a bow and asking them if they knew karate.

Watters apparently also made sexist comments against Ivanka Trump and did not apologize.

Controversy or not, President Trump is a big fan of Jesse Watters and invited him and former White House aide Sebastian Gorka to dinner. Watters even proudly showed off a picture of his menu signed by the POTUS on his Instagram last Thursday.

Even as Jesse and Noelle Watters are locked in a divorce struggle, it remains to be seen how Fox News will deal with the latest scandal on their hands.