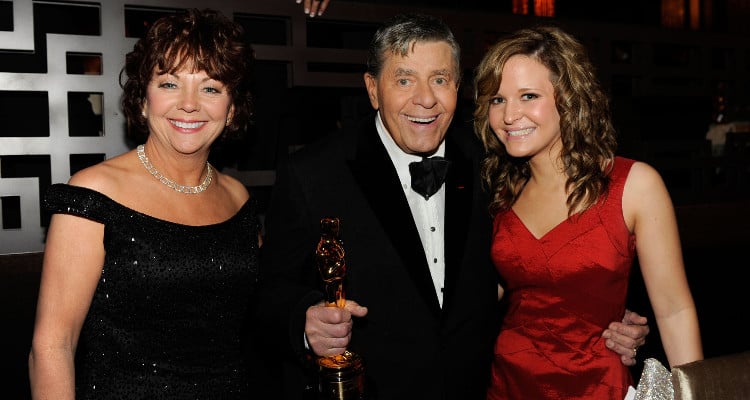 Comedian, actor, singer, and filmmaker, Jerry Lewis passed away on Sunday (August 20). As Hollywood mourns one of its greatest icons, many are curious to know more about the man who made us laugh for decades. He is survived by his wife, SanDee Pitnick, and children.

A man of many talents, Jerry Lewis passed away on Sunday leaving behind a legacy of Hollywood success spanning eight decades. His fans mourn his passing alongside his family. Jerry Lewis’ wife, SanDee Pitnick, together with his family announced the star’s death. Jerry Lewis and SanDee Pitnick were married for decades and he never shied away from talking about his marriage. Find out about the comedy legend’s wife in our SanDee Pitnick wiki.

Pitnick was a dancer who performed in Las Vegas. When she was 30 years old, she met Lewis, who was in his 50’s, while he was performing in Vegas. He was newly divorced from his first wife of almost four decades, Patti Palmer. He and Patti were parents to six sons, one of whom was adopted. Pitnick, too, was married before and divorced before she met Lewis.

Patti and Jerry separated on bitter terms and she filed a lawsuit to get him to pay spousal and child support. She listed a host of financial grievances and Lewis’ extravagance. According to her, among his many lavish expenses, he showered gifts of jewelry and other expensive things on his “woman friend” in Paris, Hawaii, Las Vegas, and Florida. Patti’s lawsuit said Jerry’s “woman friend,” Pitnick, used to work as a stewardess and had a small role in his movie, Hardly Working.

#2. They Had a Low-Key Wedding

The cinematic legend suffered severe health setbacks throughout his life. Two months after he underwent heart surgery, he was ready to tie the knot with his younger fiancée. It was probably due to his poor health, and the fact that he was very recently divorced, that they had a very low-key private ceremony. Lewis was 57 years old when he married 32-year-old Pitnick.

Lewis and Pitnick married in 1983 at Key Biscayne in Florida. They had a traditional Jewish ceremony at a hotel with the comedian’s personal manager, Joe Stabile, assigned to give the bride away. Stabile’s wife, Claudia, was Pitnick’s maid of honor. Bob Ross, who was the national director for the Muscular Dystrophy Association of which Lewis was a major supporter and spokesman of, was his best man. Including the Rabbi, those six were the only people present at Lewis and Pitnick’s wedding.

#3. They Adopted a Child

Lewis had a large family with his first wife. He and Patti were parents to Gary, Scott, Christopher, Anthony, and Joseph. They also adopted a son named Ronald. After he married Pitnick, Lewis was eager to have a daughter. They tried to have children of their own for many years. Pitnick reportedly also suffered miscarriages twice.

The couple decided it was best to adopt a child together. Lewis insisted he wanted a girl, so they adopted Danielle Sarah Lewis. Stabile said that having a daughter turned Lewis into a doting dad. However, his sons didn’t share the sentiment. Lewis reportedly alienated them in favor of his daughter and they took it bitterly. They allegedly didn’t know they had a sister until Lewis spoke about his newborn daughter on a TV show. His youngest son, Joseph, who passed away in 2009 after a narcotics overdose, had a particularly strained relationship with his father.

#4. He was Scared of Leaving SanDee Behind

Last October, Lewis was interviewed on Inside Edition where he opened up about the death of his son, Joseph. He also said that he was not working on any more films because of his advanced age. By then, Lewis’ health had declined considerably. He went through heart problems and underwent surgeries to fix them, and survived prostate cancer, as well as meningitis. He also had diabetes and pulmonary fibrosis.

Lewis suffered a back injury while performing in 1965, which almost paralyzed him. Treating his injury got him addicted to painkillers for years. He had a neurostimulator implanted in his back to reduce the discomfort. In recent years, he had to cancel several shows due to health reasons.

He made a comeback with the movie Max Rose last year, but he was afraid it would be his last on-screen work. His biggest fear about dying was leaving behind his wife, and their 24-year-old daughter. “I’m not going to hold them, I’m not going to love them,” he said as he spoke tearfully in the interview adding, “and then I can’t handle that.”

According to a rep from the family, Lewis passed away early Sunday morning at his home in Las Vegas. He’s said to have died of natural causes. Around a year ago, the comedic icon said that he had a lot to do before he died. He slowed down, but never stopped working and SanDee supported him all the way. “We’ve had 38 years and she’s my right arm, left arm, both legs, head, lips, and eyes. She’s one of those things people get lucky with.”