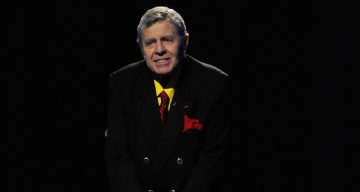 Legendary comedian and actor Jerry Lewis passed away Sunday morning at the age of 91 in his Las Vegas home. He was married twice and had seven kids, six with his first wife, Patti Palmer. If you want to know more about Patti Palmer and Jerry Lewis, then take a look at our Patti Palmer Lewis wiki.

Jerry Lewis’ agent confirmed the news of his death saying, “Sadly I can confirm that today the world lost one of the most significant human beings of the 20th century.” Another representative of the actor, Nancy Kane, confirmed that “Jerry Lewis died peacefully surrounded by friends and family at home.”

At the time of his death, Lewis was married to his second wife, SanDee Pitnick, who, along with his children, survive him. Learn more about his family and Jerry Lewis’ ex-wife, Patti Palmer right here.

Born Esther Calonico, Patti Palmer pursued her dreams of becoming an actress and a singer by making a name for herself in shows like The Colgate Comedy Hour, The Wayne and Shuster Hour, The Ed Sullivan Show, and The Jack Paar Tonight Show. She sang with Ted Fio Rito and his orchestra, after which she joined Jimmy Dorsey and his orchestra.

Palmer met Lewis in August 1944, in Detroit. Two months later, the couple walked down the aisle. The couple had six sons together, one of whom was adopted. Their eldest, Gary Lewis, was born on July 31, 1946, and is best-known for his band, Gary Lewis & the Playboys.

Palmer and Lewis’ youngest son died from a drug overdose in 2009. At the time of his death, Joseph was 45. According to sources, Joseph was estranged from his father. The two were not on speaking terms for years. In 2009, Joseph suffered a seizure and passed away in Utah. Gary apparently blamed his father for Joseph’s death saying, “Joe had problems his entire life and I blame our father,” adding, “Jerry Lewis is a mean and evil person. He was never loving and caring toward me or my brothers. I don’t know if Joe’s death is drug-related, but I believe it could have been prevented if he and my father had been on better terms. I believe he partly died of a broken heart. [My father] doesn’t really care. He’s more worried about his career and his image than his own family.”

In 1980, Palmer filed for legal separation and requested $450,000 annually to support herself and their youngest son, Joseph, who was 16, because “Jerry has displayed an open disregard for our marriage, and I am a ‘financial puppet’ at the mercy of his office, with no money of my own.” Her court papers spoke in detail about Lewis’ extravagant lifestyle. According to the documents, “He often pays the airplane travel, including specially chartered Learjets, for groups of his friends to meet him on vacations. He has hundreds of suitcases and keeps buying more. He has hundreds of tape recorders and keeps buying more.”

Additionally, Palmer was concerned about Lewis purchasing expensive gifts, and becoming friendly with a woman named SanDee Pitnick. In the end, the couple filed for divorce in 1980, which was finalized in 1983. A few months later, Lewis got married to SanDee Pitnick.

No details of where Patti Palmer is today is known. It looks like she disappeared from the limelight once her divorce was finalized. However, her work still lives on.