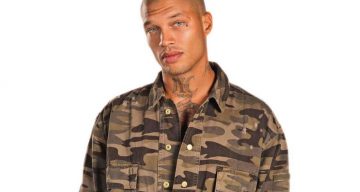 Jeremy Meeks is a high-end fashion model, who became famous for being a sexy criminal. In 2014, he took the Internet by storm with his mug shot, which was posted to Facebook by the Stockton Police Department. His eye-catching mugshot went viral, and the Internet christened him the “Hot Felon.”

Who would’ve expected Jeremy Meeks to run in the same circles as Kendall Jenner and Bella Hadid? But that’s what the Internet sensation is doing in Cannes, as he partied at the star-studded Fashion for Relief Gala. Who knew it would be his own mugshot that would turn things around for Meeks and place him among Fashion royalty?

Now, he’s traded in his bright orange prison jumpsuit for one he can wear down the runway, and there seems to be no stopping this smooth criminal now! Here’s more about the hot former felon in our Jeremy Meeks wiki.

Who is Jeremy Meeks?

Meeks was born in California in February 1984, which makes him 33 years old. During his pre-fame days, he had several run-ins with the law. Nicknamed “The Blue Eyed Bandit” and “Jail Bae,” he has been in and out of courtrooms in California and Washington for crimes including resisting arrest, faking his identity, and grand theft, for which he served nine years.

He bears gang tattoos, the teardrop beneath his eye being the most famous one.

In 2014, Meeks was arrested and charged with possession of an illegal firearm and resisting arrest. The Stockton Police Department released his mugshot on Facebook, which then went viral. His mugshot racked up 75K likes, 20K comments and 10K shares, gaining fame as the “world’s hottest felon.”

His Mother Raised Money for His Bail

Meeks’ mother, Katherine Angier, capitalized on her son’s viral fame and set up a GoFundMe page for his bail. She even defended her son and said his gang-related charges stemmed from stereotypes about his tattoos. Despite his long rap sheet, she insists her son is not a criminal.

Soon after he was released, Meeks embarked on a modeling career, sparked by reactions to his smoldering mugshot. The felon made his modeling debut at New York Fashion Week in 2016. He got himself a manager named Jim Jordan and has since flown all over the world for modeling gigs.

Jordan claims to be flooded with job offers for his client. Meeks’ net worth has not been calculated yet, but only after signing with an agency in 2016, he lives in a luxurious mansion and drives around in a very expensive Maserati. What a turnaround!

The high-fashion model travels the world and often has his wife, Melissa Curl, by his side. She was actually the one to inform her husband that he had become a viral sensation. “I just visited my wife, and she said I, like, blew up all over Facebook,” said Meek. Curl is a nurse and has two kids from a previous relationship.

At the time of his arrest, Meeks and Curl were married for four years and had a three-year-old son together. He also has a son from a previous relationship. Since his release from prison, Meeks says he found God and is focused on modeling and supporting his wife and children.

His Past Still Haunts Him

Meeks travels all over the world for his modeling jobs and has turned over a new leaf, but he still has a dreadful record. This past April, the ex-con was denied entry into the UK, where he had landed a modeling job. He was scheduled for photoshoots in London and was set to attend the cover launch of a new issue of Man about Town.

Meeks, his wife, and his manager landed in London and were stopped by authorities in immigration, who sent him and his group back to New York. Jordan said that Jeremy’s travel documents were in order and he was mistreated at the airport. “It was his first time in London and he was all excited, it was his big debut.

” Jordan continued, “He was on the right track for what we feel was going to be his new life. Now he’s very sad. Hopefully this is just a setback and he will be able to come back from this.”