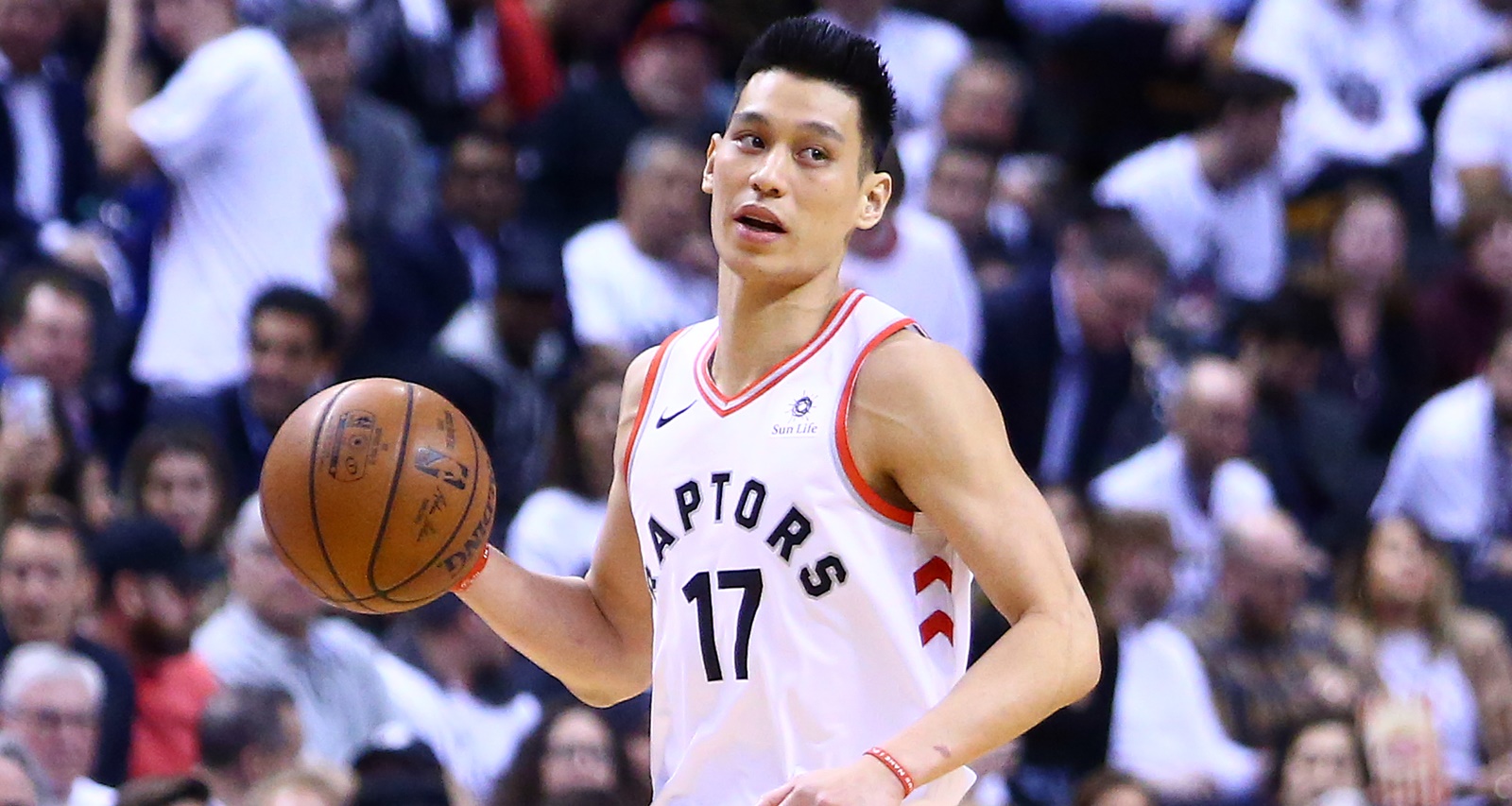 Jeremy Lin #17 of the Toronto Raptors dribbles the ball during Game Five of the second round of the 2019 NBA Playoffs against the Philadelphia 76ers at Scotiabank Arena on May 7, 2019 in Toronto, Canada. (Photo by Vaughn Ridley/Getty Images)

Jeremy Lin, the NBA sensation whose phenomenal play in 2012 gave birth to the “Linsanity” craze, recently won the first NBA championship of his career with the Toronto Raptors. But since the NBA 2019 Championship, Lin has been a free agent. In a recent interview, he said that he has been stuck at “rock bottom” during free agency. The past few years haven’t been easy for Lin after several injuries and inconsistent performances. His declining net worth to an estimated $36.0 million in 2019 might be a testimony to it. Here’s how Jeremy Lin went from an NBA inspiration to so-called rock bottom.

Jeremy Lin Led the 2012 Turnaround for the Knicks

Jeremy Lin was born on August 23, 1988 to Lin Gie-ming and Shirley Lin in Torrance, L.A. County. His parents emigrated from Taiwan in the ‘70s and are dual nationals of Taiwan and the U.S.

Lin’s paternal family descends from the Hoklo people in Taiwan, while his mother’s family is from mainland China. Lin’s father taught him how to play basketball and his mother helped him balance his basketball dreams with academics.

He went on to play at Harvard, where he set numerous records. He wasn’t picked by any team in the 2010 NBA Draft, but he trained with the Dallas Mavericks’ Summer League team.

With no immediate NBA offers, Lin was reluctant to play overseas. He was on the verge of looking for a career outside of basketball when the Mavericks, Los Angeles Lakers, and Golden State Warriors, among other teams, expressed their interest in him after his Summer League performance.

Lin signed a two-year deal with his hometown’s team, the Warriors, in 2010. The deal guaranteed a first-year salary of $500,000. He had better paying offers from other teams but wanted to play for his home team.

He later came to the New York Knicks in 2011, where he’d stage his career-defining performance. In the 2012 season, Lin was at the forefront of the New York Knicks’ winning streak. He led a dramatic turnaround for the Knicks, who had lost 11 out of 13 games that season.

In one game, Lin made such an impressive game-winning three-pointer that NBA legend Metta World Peace began chanting “Linsanity,” and thus that term became a global craze.

Lin Is the First Asian-American to Win an NBA Championship

After his terrific performance with the Knicks, Lin signed a four-year contract worth $25.0 million with the Houston Rockets. But over the years, he’s struggled with inconsistent performances on the court.

In 2014, he signed with the Lakers but had a hard time adapting to the new play and saw most of his playtime reduced. The following year, the Charlotte Hornets signed him to a two-year contract worth $4.3 million.

Lin turned down a $2.2 million player option and signed a $36.0 million contract of three years with the Brooklyn Nets. But his time with the Nets was plagued by injuries, and he was traded to the Atlanta Hawks in 2018.

The Hawks waived him out to the Toronto Raptors, but injuries meant he didn’t play much in the 2019 NBA Playoffs. He barely played a minute in the NBA Finals this year.

The Raptors won the 2019 NBA Championship, the first for the franchise, making Lin the first Asian-American to have an NBA Championship ring. Many don’t think he deserves it. Lin himself admitted that he felt emotional, wondering if he deserved the ring for his bit part in the Raptors’ win.

But analysts said he’d worked hard against all odds to make it there, and that his efforts paid off. Additionally, NBA watchers believe Lin adds value as a strategic mentor to younger players.

Lin’s Net Worth Has Declined Dramatically

At the peak of his career in 2012, Lin’s net worth was estimated at a whopping $170.0 million. His salary was modest that year. However, Knicks ticket sales increased thanks to him and his stellar performance, and he caused a jump in the stocks of businesses associated with him.

His jersey was among the highest sold in the league in 2012, and is still bought worldwide. However, the players don’t directly benefit from the jersey sales and the profits are split among the whole team.

Since the 2019 championship, Lin has been a free agent. However, he remains unsigned and is not receiving any offers despite being a popular player.

In an emotional interview about his free agency, Lin said, “Every year it gets harder. And in English there’s a saying and it says once you hit rock bottom, the only way is up. But rock bottom just seems to keep getting more and more rock bottom for me. So, free agency has been tough. Because I feel like in some ways the NBA’s kind of given up on me.”

Here’s how Jeremy Lin’s salaries have looked over the years.

From the start of his career, Lin has been a global phenomenon. The “Linsanity” craze, a popular YouTube channel, and an acclaimed biopic have made Jeremy Lin a well-known face in sports.

As soon as he signed with the Warriors in 2010, he had bagged a three-year endorsement deal with Nike. After the contract was over, he signed with Adidas in 2014 and is still on their roster. Both Nike and Adidas introduced Jeremy Lin merchandise hoping it would boost their sales in the Asian markets.

Lin has also endorsed Volvo and Steiner Sports during his career.

But you’d expect someone as popular as him to be the face of many brands. And he did get offers, particularly after the Linsanity buzz.

However, Lin sees himself as a basketball player first and refused to cash in on the Linsanity fame. This mindset is also how he ignores the racial targeting that has followed him throughout his career. His goal has been to play basketball well and not concern himself with personal profits.

His YouTube channel with over 688K subscribers is his creative outlet, featuring hilarious sketches. He earns an estimated $27,000 annually through ads on his monetized videos, which he uses to fund his philanthropic ventures through the Jeremy Lin Foundation.

Don’t Miss: USWNT Net Worth in 2019, How Much Do They Make After Winning the World Cup?

Lin Has Invested in Businesses

Like most athletes who are expanding their brand and investing in their post-basketball future, Lin also made nifty business investments at the peak of his career.

NEX Team developed the HomeCourt app that uses AI to track and analyze players’ skills and helps them improve. The app that’s backed by Lin recently received the strategic partnership of the NBA, a total of $8.5 million in a 2019 funding round, and investments from Mark Cuban, Steve Nash, and Will Smith’s Dreamers Fund.

Additionally, Lin has a foundation that manages all his business and charitable ventures. He and his brother are business partners in the foundation, while his mother is the executive director. His father manages one of the branches of the foundation.

Also Read: FACT CHECK: Did Kawhi Leonard Really Buy a House in Toronto? Has He Signed a Long-Term Deal with the Raptors?