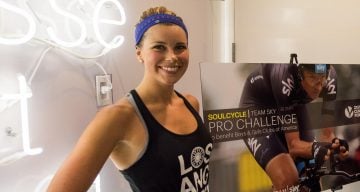 Jenny Taft joined Skip Bayless and Shannon Sharpe on Fox Sports 1’s Undisputed as moderator in 2018, replacing Joy Taylor. She’s already won over a legion of fans with her sports knowledge and captivating persona. Certainly warrants this Jenny Taft wiki for everything on this stunning sports journalist.

Jenny Taft was born on September 5, 1987, and is 31 years old. She and her brother, Charlie Taft, were raised in Minnesota in by their parents, John and Mary Taft.

Taft has displayed awe-worthy knowledge of a wide variety of sports. It’s no surprise, considering she has an athletic background herself.

She attended Edina High School in Minnesota where she was the captain of the lacrosse team. She didn’t pick up the lacrosse stick until ninth grade, but excelled in the sport nonetheless.

She was also a three-year member of the Minnesota national lacrosse team. Taft would go on to play lacrosse at Boston University, where she recorded some stellar stats.

Her father was the captain of the 1976 U.S. Olympic ice hockey team. Her mother was a speed skating champion.

Taft graduated from Boston University in 2010 with a bachelor’s degree in broadcast journalism. She started her career as an in-arena host for the Minnesota Twins and Minnesota Wild.

She would go on to join the Minneapolis station Fox Sports North in 2011, first as an on-air host and then as a sports reporter. Taft would eventually move to Los Angeles, joining Fox Sports 1.

Her job has taken her all over the world, including the 2015 FIFA Women’s World Cup in Canada and the 2018 FIFA World Cup in Russia. During the FIFA World Cup, she left everyone in awe when she spoke fluent French while interviewing viewers.

As soon as she returned from Russia, Taft moved on to her new gig—as moderator of Undisputed on Fox Sports 1. She replaced Joy Taylor, who had left the Skip Bayless and Shannon Sharp-helmed studio show.

She Is Married to Ice Hockey Pro Matt Gilroy

Happy to be back where it all started! Thank you @stxhockey for my awesome stick & gloves! 🏒#minny #stateofhockey

Taft and Gilroy are extremely private about their personal lives and don’t share much about each other on social media. So there’s very little known about their marriage. It’s also unclear how they manage their long-distance relationship while he plays in Europe and she works in L.A.