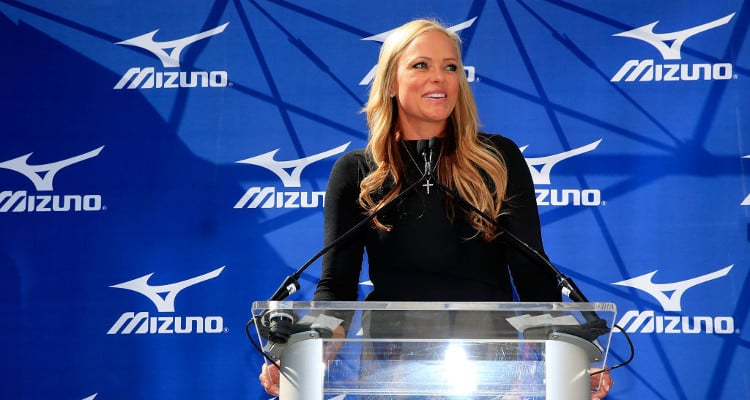 Sunday (July 9) night, celebs and softball legends gathered for the All-Star Legends & Celebrity Softball Game at Marlins Park in Miami. The most intimidating player on the field was legendary ballplayer, Jennie Finch.

The All-Star Legends and Celebrity Softball Game at Marlins Park is the least competitive game of All-Star week, but that’s what makes it so good! Actors, singers, and all kinds of celebs take on MLB legends and Jennie Finch herself. The running consensus at the game was that no one was confident they’d get a hit on Finch! Not an exaggeration at all for someone who retired from the game in 2010! Take a look at Jennie Finch’s wiki to see why she’s the legend to watch.

Jennie Finch was the youngest and only girl in her family. She has two brothers and before she became one of the most recognizable faces in softball, she was a five-year-old who found her love for the sport. By the age of eight, she was pitching under the coaching of her father.

At La Mirada High School in California, Finch played softball, baseball, and volleyball. In her sophomore year, she was named an All-California Interscholastic Federation Division II choice in softball and All-Suburban League selection. By her senior year, she was captain of all three school teams. For the first time in the school’s history, she retired her softball jersey number.

Had a great time giving kids some tips and tricks at the ARM & HAMMER drill the skills clinic. #Fanfest #ASG @MLB #ArmAndHammer

Finch majored in communications at the University of Arizona, where she played for the Arizona Wildcats softball team. She won several awards and honors during her college career; she is a two-time recipient of the Honda Sports Award for Softball Player of the Year; three-time All-American pitcher; and a first baseman.

She holds the NCAA record for winning 60 consecutive games over three seasons. Finch set the NCAA record with a total of 109 victories, including 32 wins in her junior year. Her jersey number 27 (which was the date of her parents’ first date) was retired in a pre-game ceremony in 2003.

A Pitcher of Olympic Standards

The college star was a pitcher for the U.S. team in the 2004 Summer Olympics that won the gold medal. During the Athens Olympics, she had a 2-0 win-loss record, striking out 13 batters with only one hit, one walk, and no runs.

She was once again in Team USA for its fourth straight bid for gold at the 2008 Beijing Olympics. Though her performance was remarkable, they lost to Japan and took a silver medal home. Finch said about the loss, “I feel like we let USA softball down. Many women have worn this uniform, and accepted nothing but gold.”

The 36-year-old has played professionally for the Chicago Bandits, as well. She earned a net worth of $1.5 million through softball and related endorsements. Sports outlets like ESPN and Sports Illustrated have named her one of the most beautiful women in the sport. She was the only female athlete to make it into People’s annual “50 Most Beautiful People” in 2004.

Her swimsuit spread in Sports Illustrated earned her offers from Maxim and Playboy, but she turned them down. She headed a segment, “Jennie Challenge” on This Week in Baseball and appeared on Pros vs Joes, The Real Housewives of Orange County, and Celebrity Apprentice.

The pitcher is married to another Major League pitcher, Casey Daigle, who is currently with the San Francisco Giants. The two players met in 2002 and he sent her four dozen roses asking her out on a date. The equally romantic and questionable gesture had her turn him down at first! But after spending more time with him, they made it official.

Daigle proposed to his girlfriend on the softball field at the Arizona University, her alma mater. She recalled, “He blindfolded me and took me to the mound and said, ‘You have been the queen of the diamond for four years. Now I want you to be the queen of my heart.’” How cute!

They married in 2005 and the following year, their son Ace Shane was born. In 2011, Finch gave birth to their second son, Diesel Dean. Their daughter, Paisley Faye was born in 2013.

America. ?? Land of the FREE because of the BRAVE. ❤️ So much to celebrate today & everyday! #Happy4th #FourthOfJuly