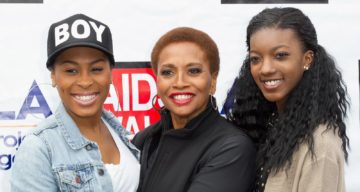 Jenifer Lewis is about to showcase her sibling dynamic on Celebrity Family Feud with her older brother and sisters. The iconic actress has detailed her childhood with her family in her memoir, The Mother of Black Hollywood. Her life hasn’t been the easiest, and she has overcome a strained relationship with her parents as well. But her relationship with her siblings has remained solid. We detail everything about Jenifer Lewis’ family, including her husband and daughter, right here.

Jenifer’s mother was a nurse’s aide. According to her memoir, her father was mostly absent from her childhood.
Jenifer and her siblings were raised in Kinloch. The actress’ childhood involved church choir and also studying at Kinloch High School.

Edward Jr. passed away in 2007, leaving behind his wife and two children. Four of Jenifer’s surviving siblings, Wilatrel, Vertrella, Jackie, and Larry, will join her in Celebrity Family Feud.

Her sister Wilatrel is married to one David Rice. They used to reside in Pasadena, California, but now live in Spanish Lake, Missouri.

Vertrella studied at Lincoln University and worked at AT&T. She is currently based in St. Louis.

The Black-ish star married Arnold Byrd in 2012. Byrd is a former sergeant in the U.S. Marines.

Byrd graduated with a BASc in public administration from California State University in 1982. He earned his BA in non-profit management from the University of Phoenix in 1996.

Byrd’s career has been primarily based with organizations in California. He served as the Future Operations Chief of the U.S. Marine Reserves in Hawaii for two years. Currently, he is an operations manager at Fenix Marine Services, a shipping company.

Lewis and Byrd are parents to Charmaine Lewis, who is often seen at red carpet events with her mother. Lewis had adopted Charmaine when the young girl was seven, after meeting through a Big Brothers Big Sisters program.