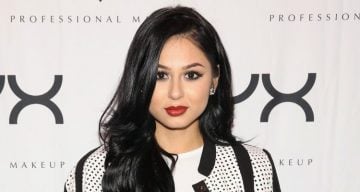 Although she has a massive social media following, Ruiz has managed to keep her husband’s identity a secret. Until now, that is. It looks like Jen_ny69 has finally exposed her husband!

Beauty vlogger and fashion guru, Jennifer Ruiz, is popular on Instagram, YouTube, and Twitter as Jen_ny69. She posts makeup tutorials on her social media targeting a Latina audience.

A native of Corona, California, Jennifer Ruiz is of Mexican heritage. She was born on March 11, 1994, which means that Jen_ny69’s age is 24.

When she began her beauty blogging career in 2014, she was one of the first Latin-American social media influencers. Her popularity rose fast, making her something of a representative of the community in the online celebrity circle.

She doles out on point advice on makeup best suited to one’s skin tone. It’s hard to believe her parents didn’t let her use makeup until she was 15!

Ruiz’s first makeup experience was on the day of her quinceañera.

“That was the first day I wore makeup,” she recalled.

The Hispanic tradition is when girls make their debut as young ladies. It is usually the first time they wear makeup and heels.

Ruiz’s sister, Annette Ruiz is also a beauty maven on YouTube. She began her channel around the same time and posts makeup and hairstyling tutorials along with lifestyle content. They also appear in each other’s videos and often give each other shout-outs.

The girls also have a brother, Ruben Ruiz.

Ruiz posted makeup tutorials to advise young Latinas on makeup best suited to them. She then branched out into documenting her daily life with a touch of humor and entertainment. Some accuse her of being raunchy at times, but Ruiz is not here to please trolls!

Her tutorials are often informative, and she provides the right kind of advice women of color are rarely able to find. For instance, she strongly advises olive-skinned ladies to ditch the bright pink lipsticks.

Because of her strong representation and wit, she’s an inspiration for many women. Besides being relatable to a lot of young girls, she has no problem shutting down her naysayers.

At times, she even teases her followers with pictures from her sexy photo shoots. When there’s no professional photographer behind the camera, this goddess treats her fans to the perfect selfie!

And she has no inhibitions going bare-faced, either. Jen_ny69 has shocked her followers one too many times with the stark difference between her natural self and her glam persona.

She’s turned her social media know-how into a consulting business for aspiring social media influencers. Not only does she have gigs where she advises how to style yourself, but she also teaches you how to take the best selfies for Instagram.

Ruiz even gives one-on-one advice on how to start your own business. Tickets to her talks are priced at $65.00 a person. But if you want the VIP treatment, that’s going to cost you $500.00.

Her success has translated into money, and she has an estimated net worth ranging from $500,000 to $1.0 million!

Despite reaching extreme levels of popularity online, there’s a hidden side to Jen_ny69.

She goes above and beyond to keep her husband’s identity a secret. Although he has been featured on her Instagram a few times, his face is either artistically hidden or the photograph cuts off at his head.

Ruiz and her man tied the knot in April 2017, with Manny having a big role in the wedding ceremony. She revealed her stunning dress and flawless makeup in an envy-worthy Instagram pictorial.

A clip of Jen_ny69’s wedding was posted on social media. But the video was filmed strategically from the groom’s back. And even the back of his head wasn’t in the frame!

A Twitter accounted called “Jenny69exposed” alleges that Ruiz’s baby daddy was with another woman named Liz, and the beauty expert is a homewrecker. The account even claims Ruiz got pregnant but had an abortion (because apparently her boyfriend at the time cheated on her) and called it a miscarriage.

Ruiz announced she was pregnant in 2015 but suddenly went off the radar. She then shut down the haters gossiping about her pregnancy by stating in a March 2015 video that she did not get an abortion.

In the same video, she clarified to those who were curious about her pregnancy that she had a blighted ovum (a gestational sac that develops without an embryo). Ruiz did get pregnant later that year and gave birth to Manny in 2016.

Manny’s dad was still a faceless entity though. Until recently!

A May 24 Instagram post by Ruiz features a man who Internet sleuths believe is her mystery husband.

His Instagram, “mannyfrescoe,” hints that his name is Emmanuel. He has only eight pictures on the photo-sharing app where he’s seen hanging out with his wife, yet his face is cut off from the pictures! His last post with Ruiz was on Valentine’s Day this year.

Well, it looks like Jen_ny69 is finally going public with her man! And we hope to see more of him in the future.