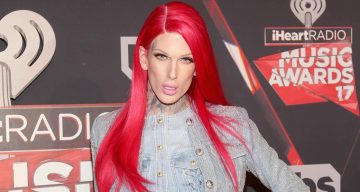 Nathan Schwandt is just 24 years old and in a happy relationship with Jeffree Star. Schwandt’s family more than approves of their relationship, and often hosts the couple at their home in Michigan. Schwandt is an Internet celebrity and model in his own right, whose estimated net worth is a modest $500,000. He has been a pillar of support to his multitalented boyfriend and the two are the epitome of love.

Nathan Schwandt is best known as Jeffree Star’s boyfriend, and is currently making waves on the social circuit.

Star is well known for his Beauty Forever fashion line, and his personal look. Schwandt and Star reportedly met through Instagram, and then started texting and phoning each other.

Eventually, Star invited Schwandt to L.A. to finally meet in person, and the two fell head over heels in love. Now, that they live together in California, they spend as much time together as possible, often never seen without the other. That was three years ago and the two are still going strong!

They both work to better Star’s brand. Schwandt works in the shipping department of Jeffree Star Cosmetics and sometimes models the products, as well. People are very curious to know more about Jeffree Star’s boyfriend, so we have some details from Nathan Schwandt’s wiki.

Born on August 18, 1993, in Michigan, Nathan Schwandt’s age is 24, making him eight years younger than his 32-year-old boyfriend. Schwandt’s family consists of his parents and a younger brother named Zachary Taylor Schwandt, who all strongly support the couple’s relationship. (And they absolutely love Star!)

In fact, the first time Star flew to Michigan with Schwandt to meet his family, the four of them got high! Star explained that the first night they were all together, he got Schwandt’s mom and dad to “hit the blunt” and they all smoked weed together.

Schwandt laughed that he’d never been high with his parents before, adding that it was cool because they definitely came out of their shell.

Star commented that Schwandt’s parents make him feel so comfortable in his own skin and added that they’re just amazing, normal people.

More Than Just a Fling

On their first date, the couple went for dinner at the Santa Monica Pier, and later had a romantic walk along the beach. In fact, Star said he was more taken by their romantic date-walk on the pier than any others he’s been on, adding that he doesn’t need fancy things.

They started dating in March 2015, and quickly realized that what they thought would be a weekend fling turned into a far more serious relationship. Schwandt and Star now live together in Calabasas, California, west of the San Fernando Valley.

Certainly Not Another Gold Digger!

There have been insinuations that Schwandt is just with Star only for his money, but the couple insists otherwise. When the couple first got together, Star had not yet started his cosmetics company.

Though he was still an influencer with his YouTube channel and music career, it was Jeffree Star Cosmetics that really put him on the map.

In fact, it was actually Schwandt who helped Star start his cosmetics company. He initially worked on the logistics side of the business to ensure that the company ran smoothly, and spent a lot of time in the warehouse.

Schwandt and Star even put together a unique cosmetic line called the Star Family Collection, under the Jeffree Star Cosmetics umbrella. It included six velvet liquid lipsticks, two lip scrubs, and a highlighter. Schwandt put all the knowledge he gathered about cosmetics and the industry to good use thanks to his relationship with Star.

A Passion for Skateboarding

Schwandt is an Instagram celebrity in his own right, and works as a model for several companies, including Jeffree Star Cosmetics. He likes to play the guitar and hang out with his friends in his free time. He also has a passion for skateboarding, and shows off his skills on Instagram.

For all those following Jeffree Star, you may be wondering who the other guy often seen in their videos is. His name is Zach and he’s Nathan’s brother. He said he knew from the start that Star and his brother really connected, but when Star came out to meet the family, he didn’t really know what to expect.

Go check out my little brother & myself in Jeffree's new September favorites videos. ??? – – Link in bio

He went on to explain that it seemed like they were the same person, and he could see each other in each of them. He’s been supportive of his brother’s relationship with Star since day one, adding that he loves their connection and their good vibes.

In fact, Zach now lives with Star and Nathan! He reportedly came out to California to visit and Star actually offered him work at his cosmetics company, which Zach gladly accepted.

Zach even allowed Star to film a complete makeup tutorial on him, with Star himself completing glamming up Zach’s face! Apparently, fans had been requesting the video for some time so Star gave them what they wanted! Zach completely complied (and looked stunning afterward, by the way) but said “I can’t imagine people trying to do this everyday, it’s a little much for me!” Star poked fun that at least Zach did better than his brother during this challenge and did not tear up!

Since Star identifies as transgender, people wonder how Schwandt identifies himself. But Star is quick to shut down any labels people may want to give him. Nathan Schwandt describes himself as straight and admitted that before Star, he only dated women.

He now believes that gender does not bind relationships, but couples should have a deeper connection than looks in order to make it work. They also need trust. Schwandt and Star have so much trust in each other that they even know each other’s cell phone passwords!

Schwandt did not think much about cosmetics before he met Star, but he now pays attention to skin care and uses moisturizers daily to tackle his dry skin. Star gawked at him when he discovered that he just washed his face with soap in the shower! (Such a skin care sin!)

Though some sources report that, much like Star, Schwandt does not drink alcohol, he certainly loves smoking weed. One of Schwandt’s favorite hobbies is getting high and watching good movies, which he admits helps him escape from reality.

Schwandt believes that people should be positive at all times, and he does not read the negative comments on social media. Instead, he focuses on uploading pictures he likes and staying positive in life. He is popular on social media, and currently has more than 922K followers on Instagram.

Dogs in the House

People often wonder if Schwandt and Star will get married, but so far they have not commented on the matter. They are happy being together, and are taking things one step at a time.

Schwant loves animals, especially dogs, and the couple has five cute Pomeranians whom they love like their own children. The five lucky pups are named Diamond, Daddy, Diva, Drama, and Delicious, and they always get the couples’ undivided attention.

Even though Schwandt and Star live in California, they regularly visit Schwandt’s family in Grand Rapids, Michigan.

Chillin’ in #GrandRapids with my snow bunny ❄️

They like it so much that they even bought a house in the city, and go hiking whenever possible. They often spend weeks in Grand Rapids, and love being out in nature. They also go on vacations, and one of their favorite destinations is Hawaii.

While Star is doing very well financially (with her growing business and successful social media channels), Schwandt is doing pretty well for himself, too. Thanks to his status as an online celebrity and his work as a model, Nathan Schwandt’s estimated net worth is around $500,000 and growing.

Though a modest amount, he is just 24 years old and has his whole life ahead of him. Together, these two could also become a serious power couple owning their own makeup empire!

Schwandt likes to share life events with fans and often showcases his sense of humor on Instagram. It also mentions that “Skateboarding is life,” and some of his interests include “Traveling the world with my soulmate.”

Ready for an Exciting Future

Nathan Schwandt’s Instagram account is full of pictures of him with Star, their dogs, him skateboarding, playing video games, holidaying in exotic places, and attending red carpet events with Star.

There also a lot of selfies of him doing things like smoking, driving, and listening to music. With age on his side, a burgeoning career, and a rewarding relationship, Nathan Schwandt seems well set for an exciting future.