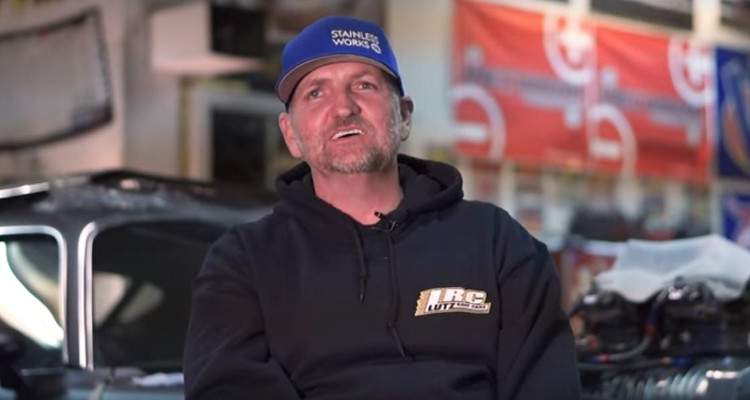 Jeff Lutz from Street Outlaws rolled out his ‘57 Chevrolet on last night’s episode (January 29). But even if he’d rather help build hotrods, Jeff Lutz is the undisputed King of drag racing.

Street Outlaws saw Jeff Lutz and his Chevrolet return to leave a burning trail on the streets of Oklahoma. And the Twitterverse has gone bonkers since Lutz brought his beloved car back after a crash wrecked it!

Get the scoop on this Street Outlaw star with details from our Jeff Lutz wiki.

What Does Jeff Lutz Do for a Living?

Appearing on Street Outlaws is Jeff Lutz’s side job. Lutz and his castmates build hotrods and race them for big bucks. But, he also owns Lutz Race Cars based in Pennsylvania.

Jeff’s Lutz Race Cars company modifies and sells streetcars and is popular among street racers. His shop also features some legendary rides that have won races.

Before he made a living from making hot rods, Lutz worked in construction. He was a bricklayer and owned a brick-and-block crew.

“When the housing market crashed, it was easier for us to go from bricklaying right into the shop,” Lutz recalled. “We went straight from laying brick to opening shop and we never skipped a beat. It was crazy.”

With parents who weren’t into cars, Lutz was introduced to the racing world much later in life. His brother, a former Marine, purchased a Camaro after the Gulf War. He let Lutz drive it at a drag strip for the first time.

“It was a four-speed car and man, I was hooked,” said Lutz. “After that, it was like balls to the wall. It never stopped.”

Lutz’s first car was a ‘74 Nova hatchback bought by his father. Unfortunately, he never got to drive it. He was caught driving without a license when he was a teenager.

“It took me a while to get that back. My life on the street started late because I didn’t get to enjoy all that stuff. The ‘74 Nova was it, but my gearhead days didn’t really start until later.”

Jeff Lutz’s son, Jeffrey Lutz Jr., gets to enjoy racing with his dad. The younger Lutz is around his mid-twenties and is following in his father’s footsteps.

Lutz got a little emotional when he spoke about his son racing and said, “Watching him run the car was like watching videos of me driving the car, it was really cool.”

Jeff Lutz and his co-pilot, Scott Murray, are regulars at the Drag Week competition every year.

Drag Week is nothing short of an endurance test where racers drive their cars for 1,000 miles over a five-day period. All they have to help them are the tools and parts they can carry.

The street-racing veteran has had his fair share of troubles during Drag Week. And Scott Murray is his trustworthy co-pilot, who keeps him awake behind the wheel usually with a kick or a drink. Before he began racing on his own, Lutz’s son was his racing partner.

And how do you keep your energy up while driving for five days straight?

Jeff Lutz said, “It’s a lot of Diet Pepsi and those nasty sandwiches you get in those cold packs. That’s about it. A few Twix bars.”

#JeffLutz is rolling his '57 back onto the list, TONIGHT on #StreetOutlaws. pic.twitter.com/tV7JDoYWos