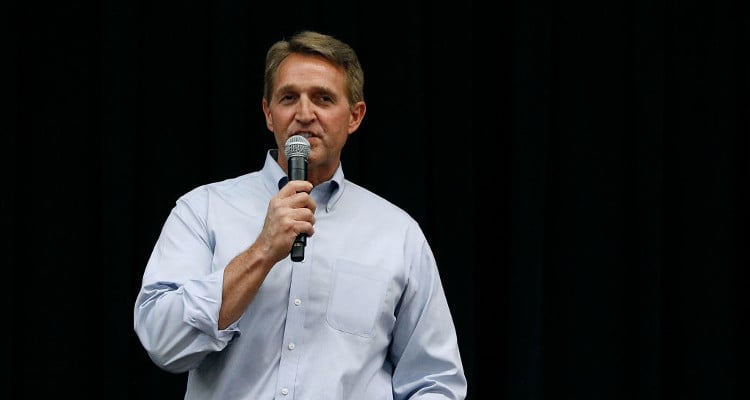 Jeff Flake made a fiery speech on the U.S. Senate floor on Tuesday, October 24, where he announced his decision not to seek re-election in 2018. He criticized the policies of President Donald Trump and expressed his concerns about how the Republican Party was functioning. Flake has always taken a strong stand on issues that concern the nation and has been vocal about them. He told the Republican Party members to take more responsibility for their work so that coming generations can have a better country.

The internecine wrangling within the Republican Party gets worse as a respected and seasoned politician has announced that he will not be seeking re-election in 2018. Senator Jeff Flake announced his decision on the Senate floor on Tuesday, October 24, 2017, and said that he “will no longer be complicit or silent” at President Donald Trump’s “reckless, outrageous, and undignified” behavior.

Flake made this announcement in a 17-minute speech, where he challenged Trump and his party’s leadership. He made strong comments on the state of the nation and blamed Trump for what he sees as a nation in disarray.

Jeff Flake’s speech has stirred up mixed emotions within the Republican Party, with some supporting him and others vilifying him. The Jeff Flake-Donald Trump clash has been going on ever since the latter assumed office as the president of the United States. Here are a few details from our Jeff Flake wiki.

Man with a Conscience

Born on December 31, 1962, in Snowflake, Arizona, to his parents Nerita Hock and Dean Flake, Jeff Flake’s age is 54. Flake is an American politician and member of the Republican Party, who has served as the Junior United States Senator from Arizona since 2013.

After completing his schooling, Flake obtained a BA in International Relations and an MA in Political Science from Brigham Young University. Flake has always been keen on contributing towards social progress and served as a Mormon missionary in South Africa for two years in the early 1980s. He then worked in the public affairs sector and for the promotion of Democracy in Namibia.

Flake had opposed economic sanctions on South Africa in the 1980s because he believed that they would hurt the black population who were already in torment, due to the country’s apartheid policies.

Once Flake entered mainstream politics in America, he became an important part of the American political system. He served on various committees such as the Committee on Energy and Natural Resources, Committee on Foreign Relations, Committee on the Judiciary, and the Special Committee on Aging.

Jeff Flake has also taken a strong stand on issues facing the nation such as budget and economy, disaster aid, environment, foreign policy, gender discrimination, gun law, immigration, and social issues. This has often put him in a confrontational position with Trump, who has mocked him in public.

Flake has been particularly upset over what he termed as Trump’s isolationist tendencies and policies. He is also not impressed with his aides’ behavior.

Flake has always spoken his mind and has been very clear about his stance on major issues that concern the country. According to Jeff Flake’s voting record, he actively opposes taxing businesses, government waste, the increasing in federal spending, increase in disaster aid, gender discrimination, legal abortion, and using military personnel for the promotion of sports events.

The politician is a strong believer in positive family values. Jeff Blake’s family comprises of his wife and their five children, and they live in Mesa, Arizona.

Flake and his wife, Cheryl Bae, married each other in 1985. They are religious and are the members of the Church of Jesus Christ of Latter-day Saints.

Tucson Day. Thanks @wakeuptucson and @jonjustice for having me on this morning. #DayInTheLife

Flake made a strong pitch for his party to take more responsibility for what he feels is the deteriorating state of America.

Flake is leaving out of his own free will, but he is going out fighting!