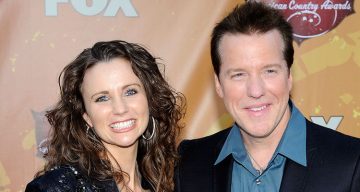 Currently, American ventriloquist and stand-up comedian, Jeff Dunham is on his Perfectly Unbalanced tour in the United States. Dunham has been married to Audrey Murdick for four years now, but many are unaware of the woman behind the comedic puppeteer! If you are wondering who Jeff Dunham’s wife is, then take a look at our Audrey Murdick wiki.

Audrey Murdick is a Certified Nutritionist

Along with being a certified nutritionist, she is also a competitive bodybuilder and a personal trainer. When Murdick was young, she had become out of shape and decided that she had to shed the extra weight and start eating healthy. Murdick tried several methods to reduce her weight, including yoga and spin classes, but she felt that wasn’t enough.

After working with a trainer named David, Murdick got into body building and became motivated to become a nutritionist. She has even participated in several fitness competitions. Murdick has quickly gained recognition in the industry, due to her expertise in being a fitness guru and knowledgeable nutritionist.

Also Read: Mike Myers’ Wife, Kelly Tisdale: Everything to Know about the Man Believed to be “The Gong Show” Host’s Wife

One last pic from our fun day on the Malibu Wine Safari! Now back home to put two little nuggets to bed… #happy21st @ashlyndunham

Wouldn't it be nice if we didn't have to worry about gaining ANY weight from now until January 2nd?? It is possible! Check out my post: "My #1 Tip on How To Prevent Weight Gain During the Holidays" Link in Bio! www.AudreyDunham.com

Besides being a nutritionist, Murdick has also tried her hand in acting. She is known for her role on Jeff Dunham: Birth of a Dummy, Jeff Dunham: Minding the Monsters and Incredible Edible America.

Before getting married to Murdick, Jeff Dunham was married to Paige Brown. The couple adopted a daughter, Bree, and have two daughters of their own, Ashlyn and Kenna. However, their marriage did not last for long, and Dunham filed for divorce in 2008.

In 2009, Dunham started dating Murdick, and after dating for two years, the couple decided to take their relationship to the next level and got engaged in December 2011. In fact, Murdick put Dunham on a strict diet and helped him to lose fat and become more fit. The couple tied the knot on October 12, 2012 in Santa Ynez, California at the Sunstone Vineyards and Winery. Their special day was attended by at least 112 guests. Then, in 2015, Dunham announced to the world that he and his wife were expecting twins! On October 11, 2015, Murdick and Dunham welcomed their twin boys, Jack Steven Dunham and James Jeffrey Dunham, in Los Angeles. The boys were born just two hours apart.

If you are a fitness fanatic or are on the way to adopting a healthy lifestyle and want some inspiration, then you should take a look at Murdick’s website. Speaking about fitness, Murdick said, “There is so much conflicting information out there that it’s hard to know what to take seriously, it doesn’t have to be this way—for many years I’ve focused on how to achieve overall health and true happiness through simple approaches. I am so excited to now be able to help people achieve a similar balance in their own lives.” On her website, Murdick not only provides delicious and healthy recipes, but also gives you tips on fat loss, life & sanity, body talk and good eating.